Striving for excellence, working hard and being diligent are easily a few desirable traits in a doctor. Rolando possessed all of these traits and more, and when he was growing up, he dreamed of studying to be a doctor.

However, his family’s financial situation and pressure from a culture in his Costa Rican fishing village that did not believe in the value of education led him to stop his studies after the sixth grade so he could go to work as a fisherman.

Rolando’s society called studying “laziness,” and Rolando came to refer to his childhood dreams of becoming a doctor as just “illusions” that eventually faded away under the weight of his daily reality.

But you can’t fight fate, as they say. Rolando didn’t have the opportunity to use his character traits working as a doctor, but he found another use for them — one that has put his small family business on a path toward success and earned him a reputation as one of the best in his industry. 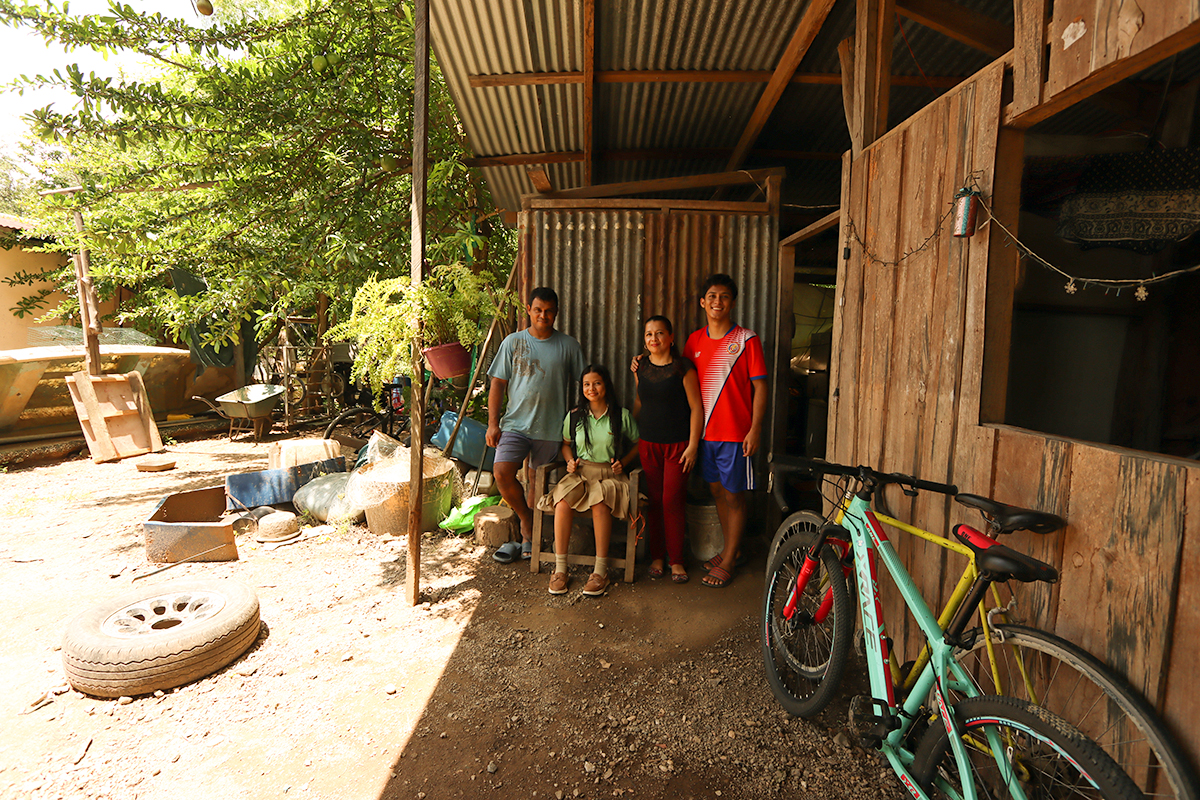 Longtime fisherman Rolando and his family live in a fishing village and tourist destination in Costa Rica's Puntarenas Province. Before his children were sponsored in Unbound, Rolando described his family’s home as like a “shanty house,” where his children’s feet were always muddy. From left, Rolando; sponsored child Deily, 14; wife, Darling; and Unbound scholarship recipient Jefferson, 21, in front of their home in Costa Rica.

the boatbuilder of puntarenas


The Puntarenas Province is located on the westernmost part of Costa Rica and borders with the Pacific Ocean. While the province is rich in marine life and fishing is one of the area’s main sources of income, the most important recent economic activity of Puntarenas is tourism. The region, however, is challenged with poverty.

In 2021, an article in the Costa Rica News called Puntarenas “the most impoverished region in Costa Rica today,” with the poverty level reaching an estimated 34.7% in 2020.

Rolando is the father of Unbound scholarship recipient Jefferson, 21, and sponsored child Deily, 14, who participate in Unbound’s San Jose program. Rolando learned to fish from family members when he was 8 years old. Fishing has been the main source of income for his family of four, but the work is difficult and often unstable due to different weather situations in the region and frequent fishing bans put in place to allow the fish time to reproduce and grow.

It was during a three-month fishing ban that Rolando realized he needed to do more for his family to survive. Already skilled at repairing small fishing boats for those in his community, Rolando took an interest in learning how to make fiberglass boat molds, but he lacked the confidence to pursue training.

But that’s where his wife of 21 years, Darling, came in, encouraging him to pursue what he loved. The family rented a house near the National Institute of Apprenticeship (INA), where free training in skilled trades is offered to anyone over the age of 15. Rolando spent two years in a shipbuilding course.

Those two years were hard on the family economically, and Darling recalled many times having nothing to feed their children except rice, while Rolando found small jobs to do outside of his coursework. When the children received sponsorship through Unbound during that time, Darling called their sponsor an “angel” because they could now pay for their children’s necessities.

“They have been a blessing from God,” she said. “Unbound has been the engine that has driven us to get to where we are now.”

When the family first opened their boatbuilding business, they faced many challenges. Besides not being able to afford reliable tools and the necessary materials, Rolando also lacked a dedicated workshop with electricity to store and build his boats. In the beginning, he made the boats in the front yard of his home, but the dust and weather complicated the process.

One memory that stands out to Rolando when he first started building boats is the moment he got the idea to make a large boat mold for a tourism boat.

But that comment was like fuel to a flame and, eight months later, after Rolando completed the mold, the man who had once mocked him became his first customer for that style of boat. 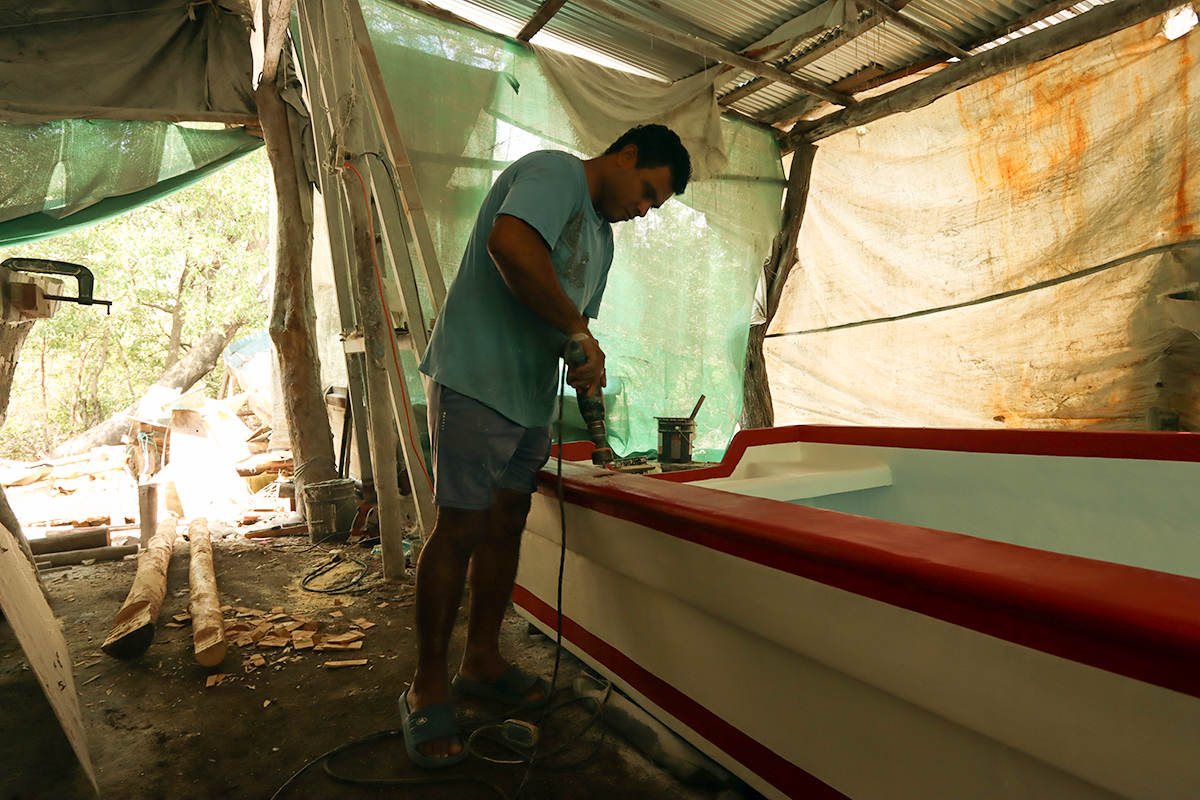 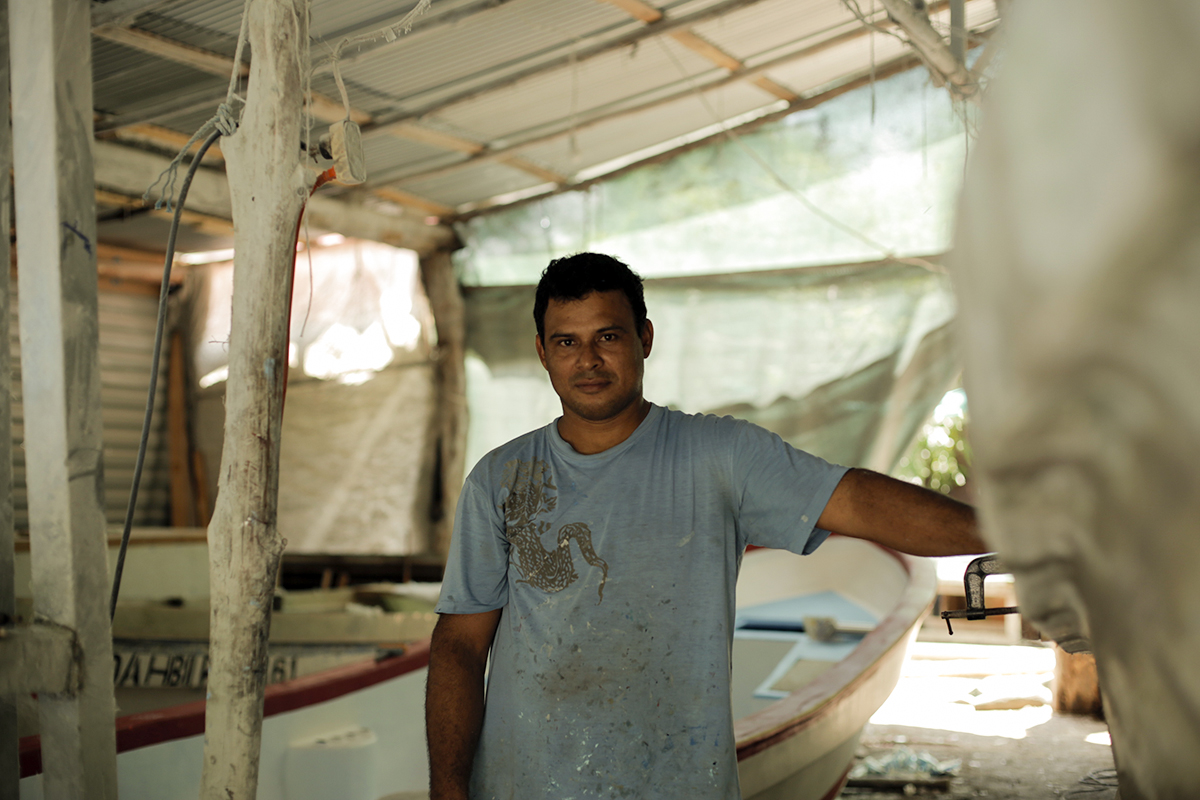 Photo 1: Rolando paints and polishes a fiberglass boat inside his workshop in Costa Rica. He learned shipbuilding from a course he took through the National Institute of Apprenticeship so he could better provide for his family.

Photo 2: Members of his community in Puntarenas Province would come to Rolando for help repairing their fishing boats. Before receiving the Small Business Accelerator grant through Unbound, Rolando did not have a covered workshop for his boats, but instead, did his work outside, in the front yard of his home.

Photo 3: Rolando stands next to a boat he is building in his new workshop in Costa Rica. He has built more than 40 boats, including fishing and tourist boats, since opening his business and has customers all throughout the country.


Known for their durability in choppy seas and versatility, fiberglass boats are the most common material used to craft small recreational boats, such as for sportfishing, cruising and tourism.

Rolando finished his first boat, an 18-footer, with a small, borrowed drill and other tools. Since that time, he has completed more than 40 boats of various sizes that he has sold to entrepreneurs with small businesses in the tourism industry and individuals from all over the country. Depending on the style of boat and the size requested, building a boat can take Rolando anywhere from 15 days to two months to complete, and his largest boats have sold for as much as $10,500 USD.

He remembers two major turning points in his quest to get his family business off the ground.

The first turning point was when he received assistance from Unbound through a pilot program called Small Business Accelerator, which is meant to help entrepreneurs scale their businesses by providing a small infusion of capital. With this support, Rolando was able to purchase necessary tools and materials, and complete several molds that would allow him to scale his business. The family was also able to construct an acceptable, enclosed boat workshop at their home, complete with electricity.

The second turning point came when Darling secretly took a photo of Rolando building a boat and posted it to his Facebook page.

“I was learning [social networks], and I said to him [Rolando], ‘You have to make yourself known,’” Darling said. “'I am going to upload that work you did.' I uploaded it, and it got a lot of comments and likes. … So that’s where it started … we became better known.

“I feel happiness and satisfaction because we can see the results, the effort he has made, and we are happy because we see that we are making a good beginning.”

The family has also, little by little, been able to make improvements to their home, replacing the leaky roof with a more stable one and reinforcing the floor. 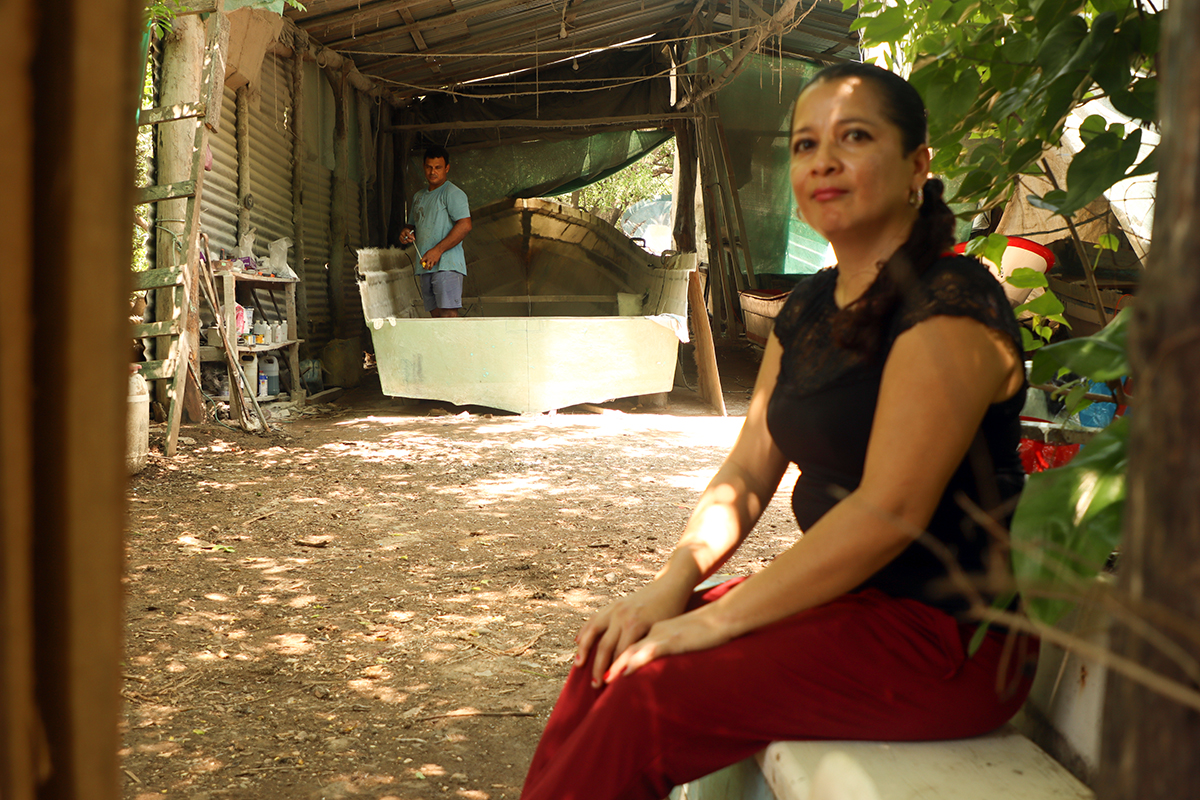 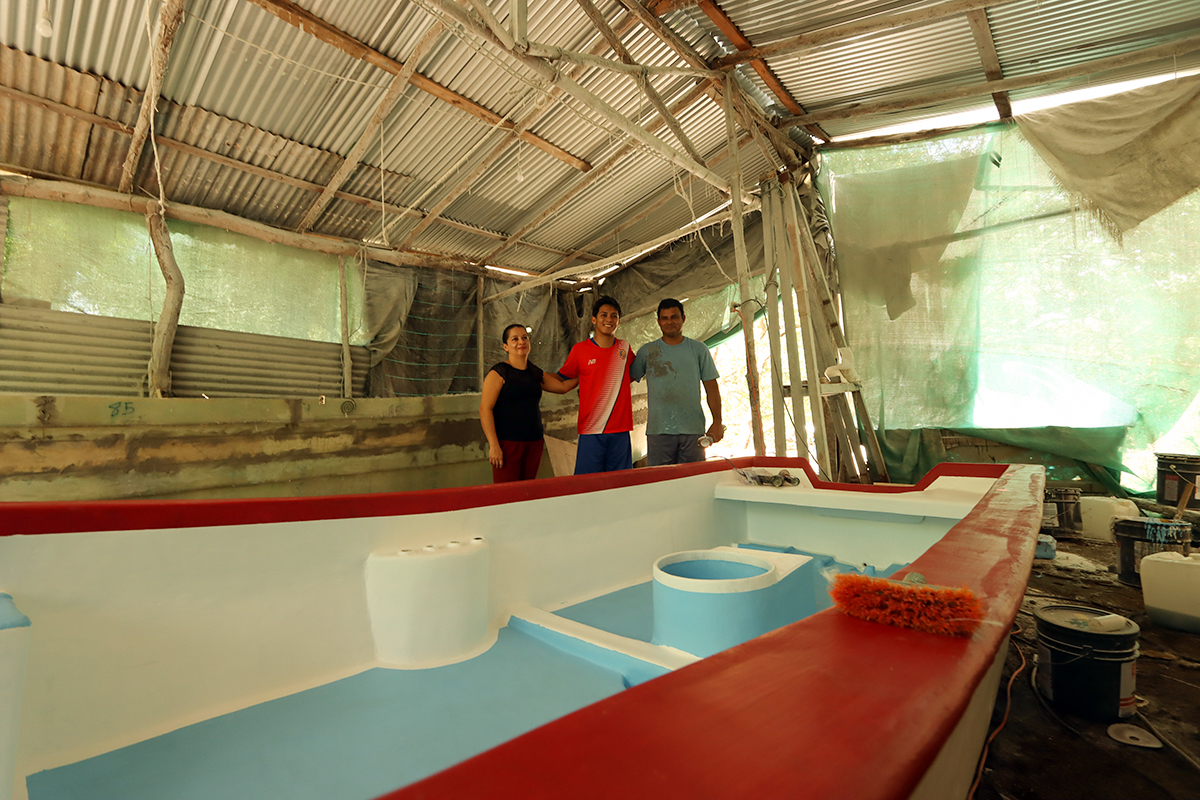 Photo 1: Darling, Rolando’s wife, sits in front of her husband’s new boat workshop in Costa Rica. Darling worked on banana plantations from the time she was 13 until she married. When she met Rolando at the age of 15, she thought he was “old fashioned,” but they have now been married for more than 20 years. Darling helps Rolando manage the business side of the family boatbuilding business and promotes his work on social media.

Photo 2: Darling, Jefferson and Rolando show off one of Rolando’s newest fiberglass boat projects in his workshop. Though he’s studying industrial engineering, Jefferson helps his father run the family business when he can and hopes his education will one day help the business run more smoothly.


When he’s not studying industrial engineering, Rolando’s son, Jefferson, helps his father build boats, cutting the fiber and painting. Rolando sees the value in his children developing skill sets in many different areas, as he did.

“Many people study and only learn what they are studying,” Rolando said. “What we are doing here will help him in what he is studying in the future. The idea is that he learns and has knowledge in many areas that he can develop himself.”

Jefferson believes a degree in industrial engineering will allow him to help improve the process and the products of the family business. He wants to help his father because he understands what Rolando’s efforts toward creating a better life for his children have cost him.

But they are a united family, ever striving to realize their greatest potential together. “Continuous improvement is important to us,” Jefferson said. “We always work with quality … if we see that there is a fault, we improve it.”

For Rolando, the idea is to always keep the business growing. “We work to be better every day, and we try to put more love into it,” he said. “If someone says, ‘I’m going to do this and that’s as far as I’m going to go.’ No, we keep growing.” 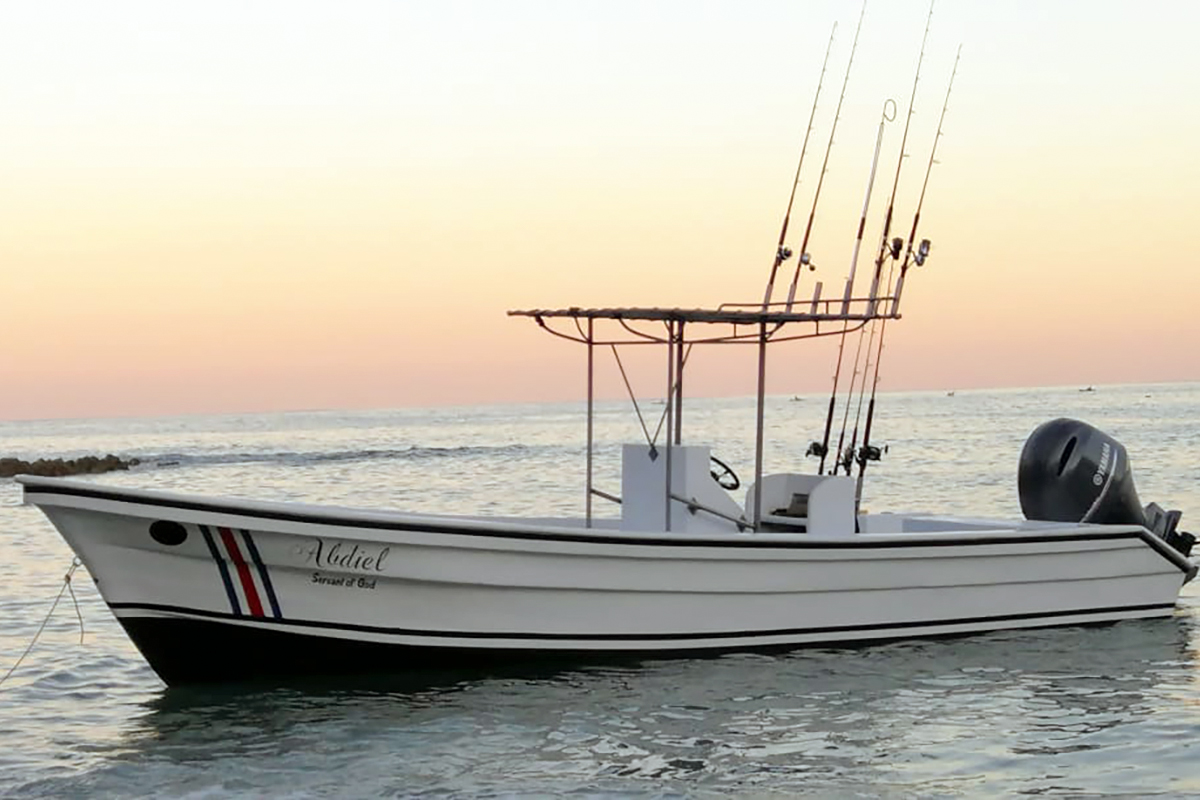 One of Rolando’s completed artisanal fiberglass fishing boats sits anchored off the coast in Puntarenas. Rolando’s skill with boatbuilding and his dedication to quality products has earned him a reputation as an expert boatbuilder in his area, while allowing his family to live a little more comfortably.

We work to be better every day, and we try to put more love into it [building boats]. The idea is to keep growing, always.