The challenges of commuting in communities around the world


The people sponsored through Unbound live in places that are often as rugged as they are beautiful. They reside in isolated rural villages, on mountaintops, at the edges of forests, in massive cities and all sorts of other locations. Their homes are sometimes surrounded by the most breathtaking landscapes one can imagine, but these locales aren’t just to enjoy. They’re to get through and around, back and forth — on foot, by boat, motorbike, jeepney or tuk tuk — for whatever necessity dictates.

Jeralyn is a 11-year-old sponsored girl from the Philippines who twice daily crosses a 275-foot hanging bridge over a river to go to school. “I sometimes get scared [on] that bridge because it is shaking,” she said. Her mother sees it differently. “Before we have this hanging bridge, we cross the river by walking,” she said. “We get wet every time and if the water rises because of rain, we cannot pass through, so they can’t go to school. We are very thankful that we have this hanging bridge now.” 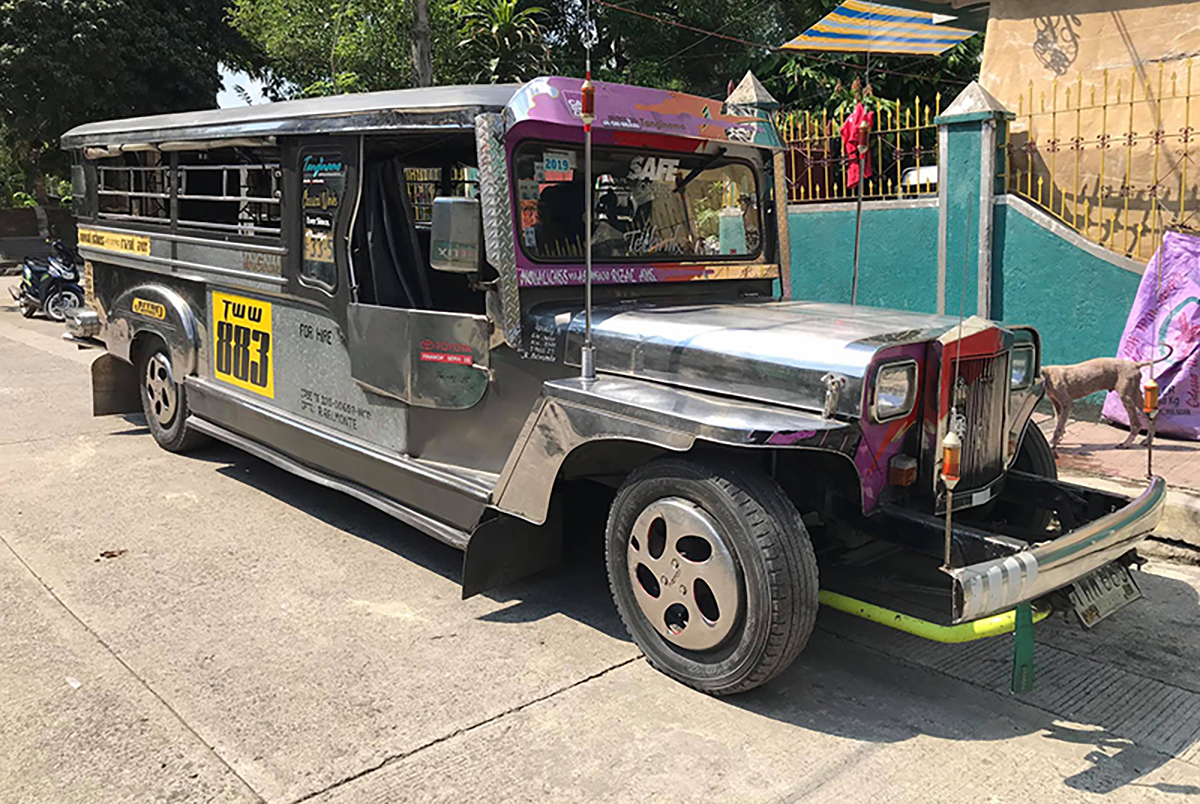 Jeepneys are buses used for public transportation in the Philippines. Most are colorfully and distinctively decorated.

FROM BEFORE LIGHT TO AFTER DARK


Life in communities where Unbound works must always be measured by time, not so much by clocks and calendars but by how long it takes to get from here to there and back again.

Sandra is the mother of Christopher, a 13-year-old sponsored boy. Their family lives near Lake Atitlan in Guatemala. Sandra sells woven fabrics in a town across the lake. Twice a week, she travels 30 minutes by boat and then walks more than half a mile to board a bus that will take her to the marketplace where she works. Later in the day, she’ll do it all again in reverse. The round trip costs nearly $5, a sizable sum for a family working to overcome poverty. 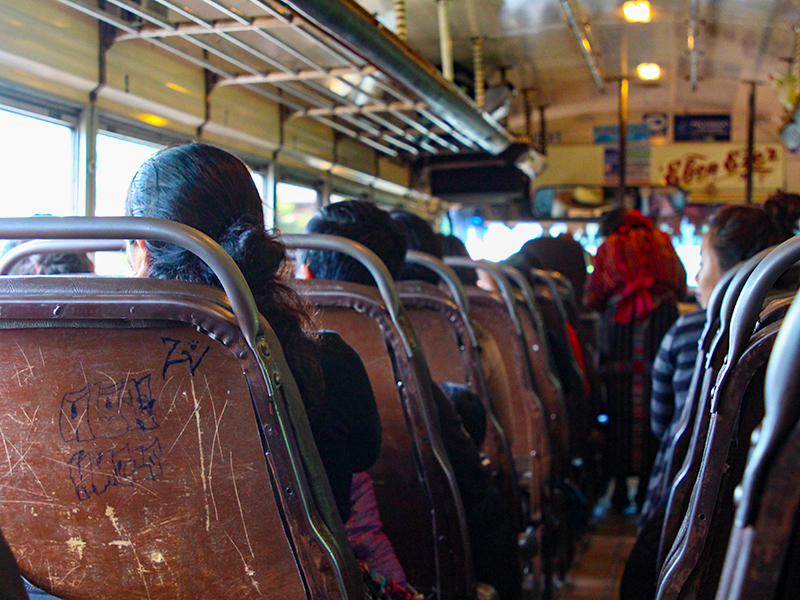 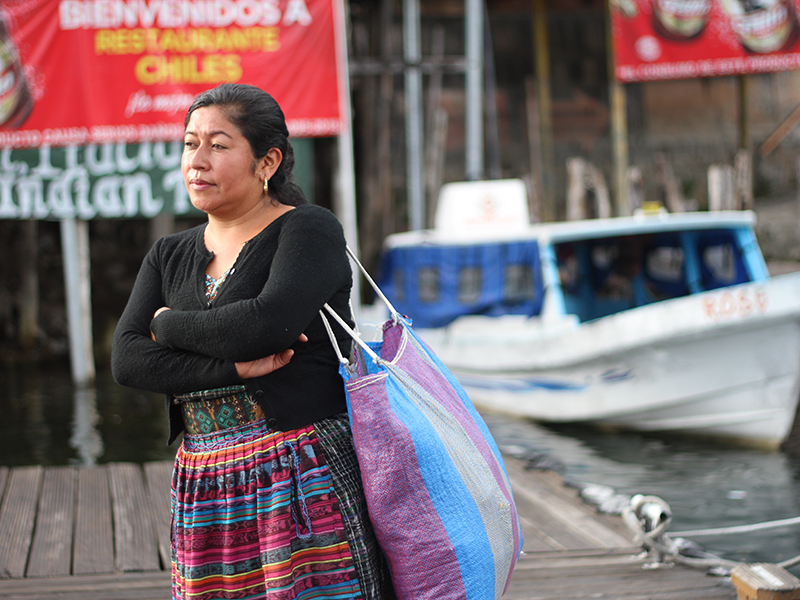 Sandra, the mother of 13-year-old sponsored child Christopher, goes several times a week from her home on one side of Lake Atitlan in Guatemala to a marketplace on the other side of the lake, where she sells woven fabrics. She rides a bus part of the way (left) and makes the rest of the trip by boat (right).

THE COST OF HAVING LITTLE


Time, it’s said, is money, and nowhere is that truer than in places where distance creates obstacles for people with few resources. According to worldbank.org, “An estimated one billion people in low-income countries still lack access to an all-weather road. In many cities, time lost to congestion erodes prosperity. High mobility costs cut the disposable income of the poor who often lack reliable and affordable public transportation.”

Unbound regional reporter Oscar Tuch provided a lesson in the economics of transportation in Guatemala. In the rural areas, costs for the various modes of transportation are inconsistent and unpredictable, which makes it difficult for families to budget for them. “Another factor is the hazardous road conditions, which damage the vehicles traveling by land,” he said. The greater the expenses for vehicle maintenance and repair, the higher the transportation costs are likely to be.

The greater the expenses for vehicle maintenance and repair, the higher the transportation costs are likely to be. 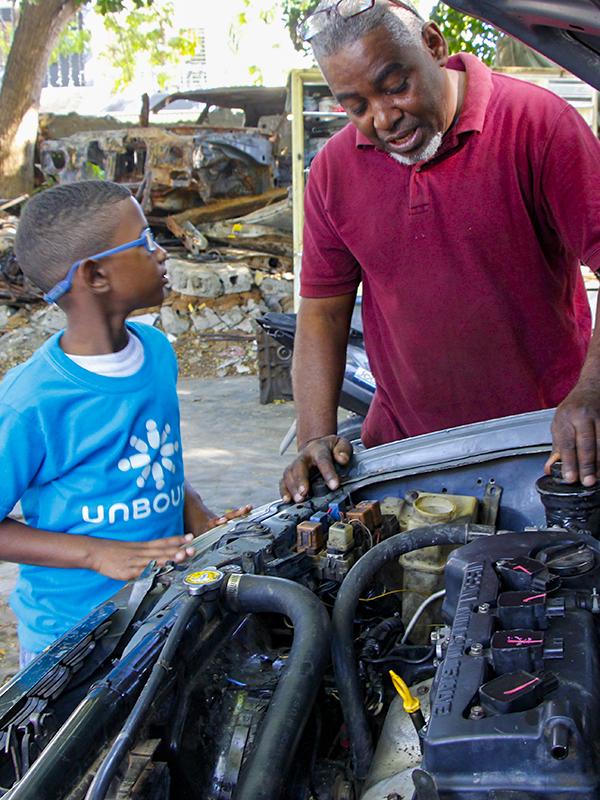 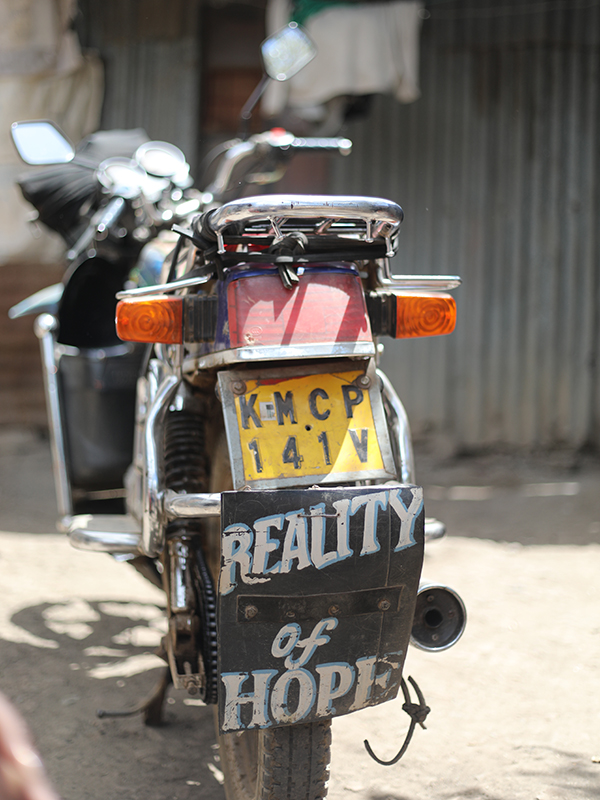 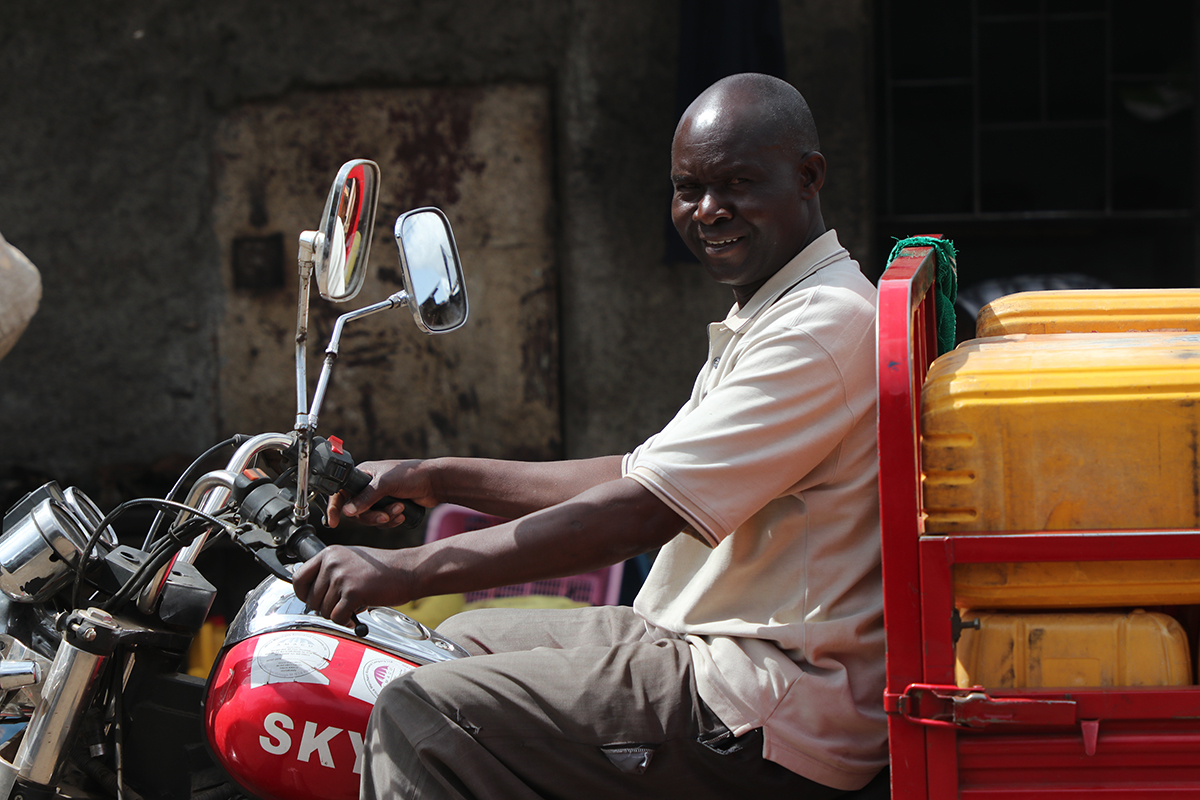 (Upper left) Sponsored child Misael, 10, lives in the Dominican Republic. His father, Sergio, is a mechanic and wants to teach his son the trade but worries that the boy’s visual impairment might make it difficult for him. (Upper right) Motor bikes are a popular form of transportation on the rough roads and congested streets of Kenya. Some riders carry amazingly large loads on the backs of the bikes.

(Bottom) Tobia drives his motorbike throughout the sprawling Kibera slum in Nairobi, Kenya, selling drinking water to residents. He is the father of sponsored youth Maurice.

THE DAILY TREK INTO HAZARD


Public transportation around the world has its dangers. People are injured in traffic accidents, often caused by poor road conditions. Buses are overcrowded and passengers aren’t always secure. Sexual assaults are common. Street gangs extort money from bus drivers and passengers. Poverty breeds vulnerability. According to worldbank.org, “More than 1.25 million people are killed and up to 50 million are injured on the world’s roads every year. Low and middle-income countries account for 90% of the deaths although they own just half the world’s motor vehicles.”

Risk, like time, distance and relentless necessity, is never far from the consciousness of those who, daily, must navigate their way through a beautiful but sometimes harsh world. 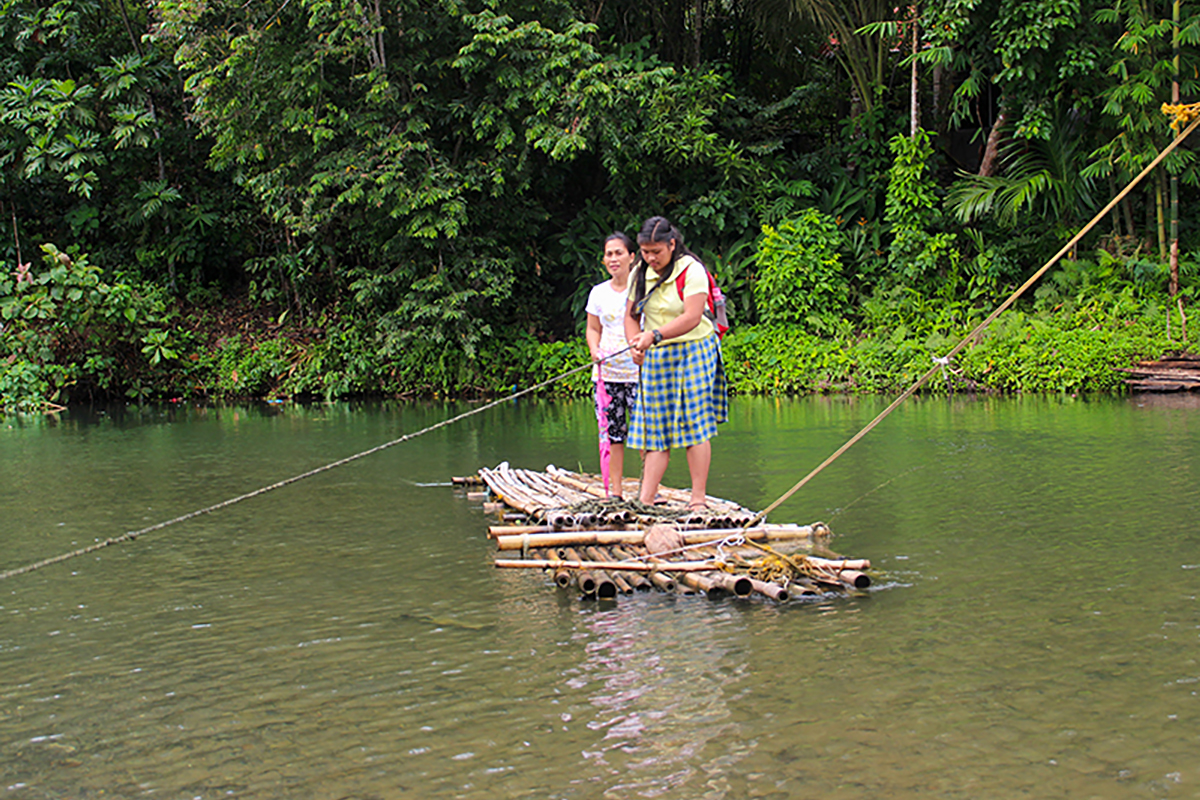 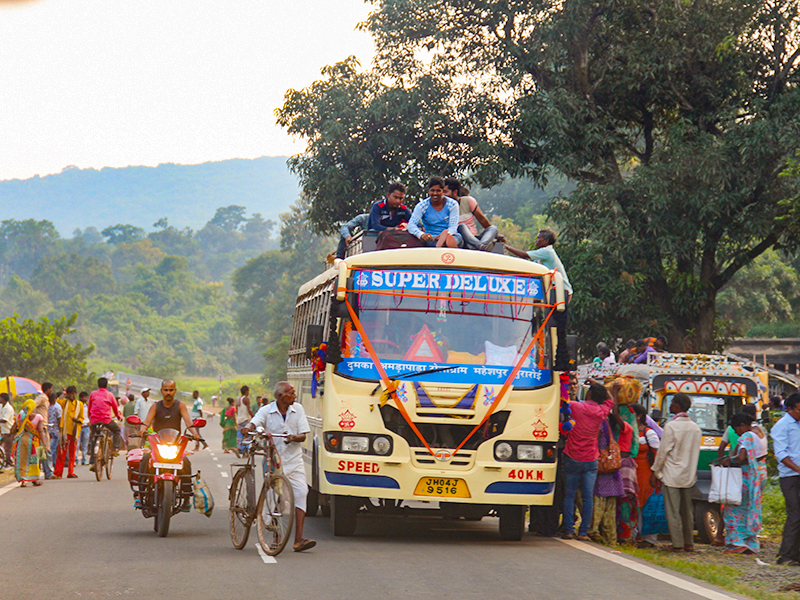 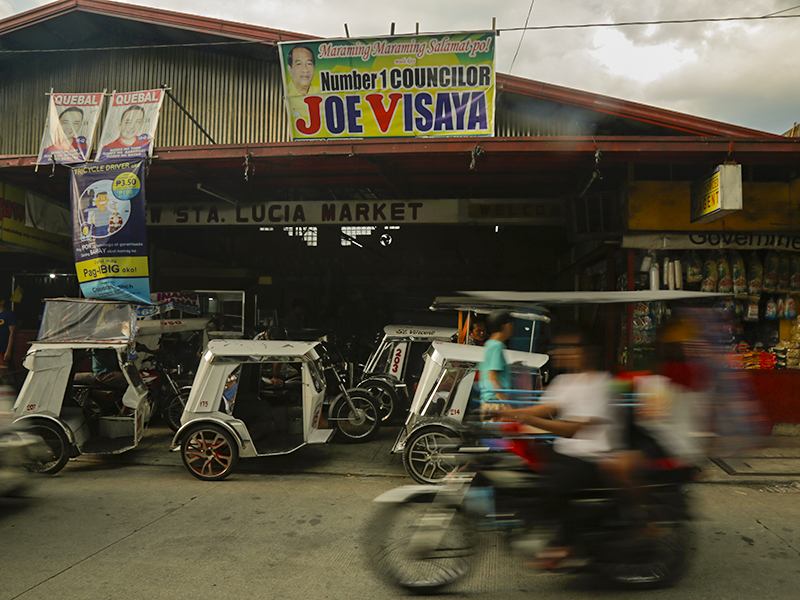 (Top) Sponsored youth Maria, 17, uses a rope to pull herself across a Filipino river on a bamboo raft. This is her daily routine to get to and from school. Her mother, Lucy, accompanies her.

(Bottom, left) In Bhagalpur, India, as in many locations around the world, public transportation is often filled beyond safe limits. Here a bus carries passengers both inside and on top. (Bottom, right) Motorized tricycles like those pictured here are used to taxi passengers around cities in the Philippines. Restrictions on travel during the pandemic have severely impacted those who earn their living driving these vehicles.

HALTED BY THE PANDEMIC


Not surprisingly, COVID-19 has seriously affected those who must commute to work and school, as well as those who earn their living in the transportation industry. Mandatory lockdowns in countries around the world have placed severe restrictions on workers in the informal sector, which includes most families in the Unbound program.

The situation of Roland and April, the parents of sponsored child Roland in the Philippines, is an example of the challenges created by the pandemic. April is a street vendor who can’t work during the lockdown. Roland, who normally earns income transporting people around Quezon City in the sidecar of his motorized tricycle, found himself without passengers as travel was restricted. The family, like many, has received support from Unbound’s Disaster Response fund.

For the working poor, the risks of travel must be constantly weighed against the consequences of not traveling. Like every other aspect of their lives, whether to go or to stay is a never-ending calculation.

This article was originally published in the 2019 print edition of Living Unbound and updated in 2020.