The opportunity of a lifetime

When love of the game becomes the opportunity of a lifetime


In the U.S., baseball in the springtime is about hope. In the summer, the game becomes about endurance. Fall, for the fortunate few, is for glory. And in winter, baseball rests.

But in the Dominican Republic, where "la pelota" ("ball") is a way of life and an object of passion, the game is eternal. In a nation that lives and breathes the sport, glory is not just for fall and dreamers are never out of season.

The dreams of 18-year-old Damián, formerly sponsored through Unbound, center on becoming one of the lucky few for whom baseball becomes a path out of poverty. Like most Dominican youth, he loves the game. Unlike most, his talent caught the eye of major league scouts early on.

"At first I started playing in my neighborhood," Damián said. "I was around 5 years old. When I was 12, I started getting noticed by the scouts from the organizations and they followed me to get me to this point.

One of three brothers, Damián was sponsored by Mark and Mary Jo from Topeka, Kansas, from the time he was 4 until 2018. That's when he was signed by the Baltimore Orioles to enter their Dominican development system. He is now in the Orioles' baseball academy in Boca Chica on the nation's southern coast, training alongside other young prospects. 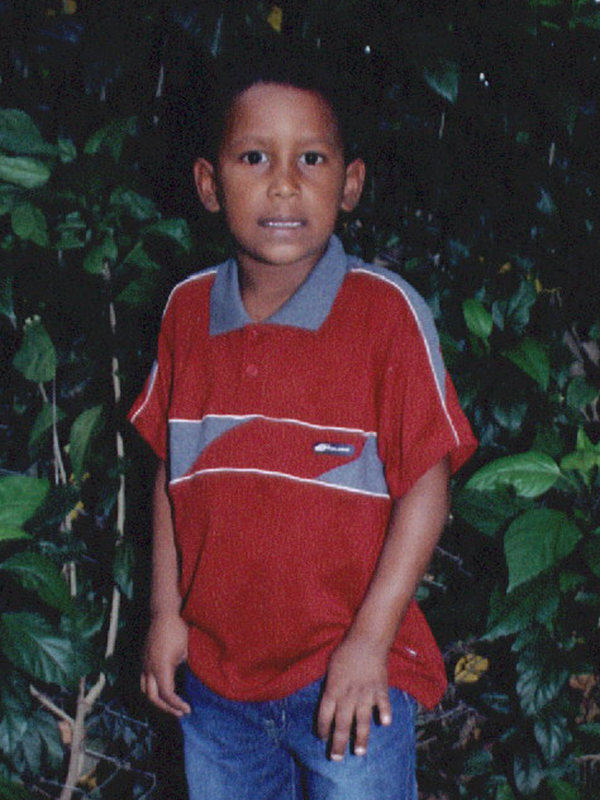 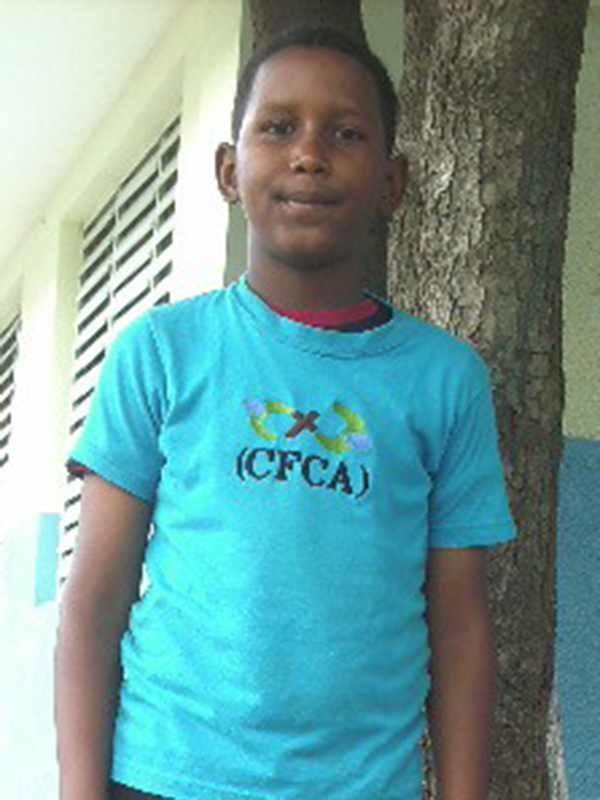 Damián was first sponsored when he was 4 years old and grew up with support from the sponsorship program.


From the time it was introduced by Cuban immigrants in the early 20th century, baseball captured the imagination of the Dominican people.

In the 1930s, in an effort to bolster his own popularity, longtime Dominican dictator Rafael Trujillo built professional-caliber ballparks across the country and paid for some of the premier Negro Leagues players from the U.S. — stars like Josh Gibson, Satchell Paige and Cool Papa Bell — to play in the DR. In turn, some of the best Dominican players came to America to join the Negro Leagues. The exchange improved the level of play in both countries and, though the major leagues wouldn't become integrated until 1947, they took notice.

The first Dominican-born player in the majors was Osvaldo Virgil Sr. in 1956. Others soon followed and the Dominican Republic eventually became the greatest source of big-league talent outside the U.S. While COVID-19 changed the makeup of every big-league club in 2020, at the start of the previous season 102 of the 882 players on major-league rosters, 11.6 percent, were from the DR, according to MLB.com.

According to Baseball America, organized games between the various Dominican baseball academies has been halted since March because of COVID-19. While Damián has no stats displayed for 2020 on Baseball Reference's website, he still projects as an outfielder in the Orioles system. Also, Baltimore sports reporter Steve Melewski says that Damián was one of a handful of Orioles prospects selected for English tutoring during the hiatus, which could be a sign that the club expects him to advance. 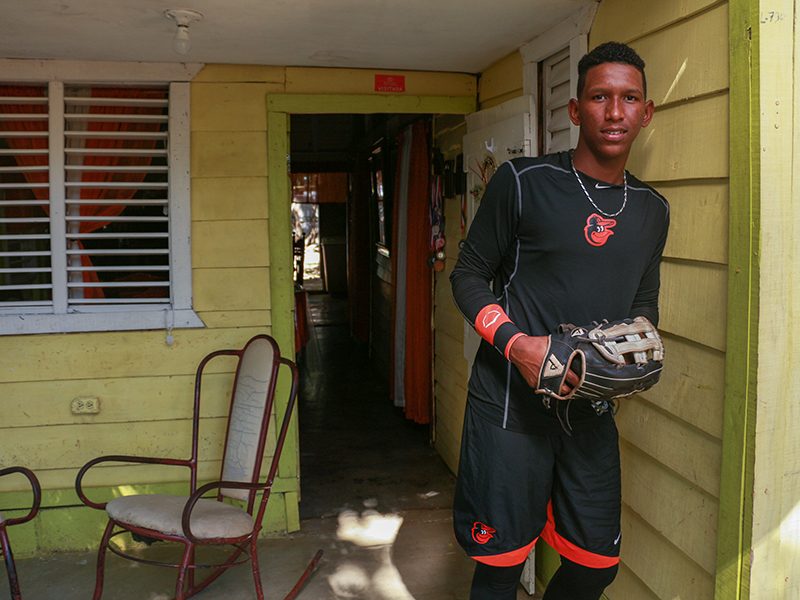 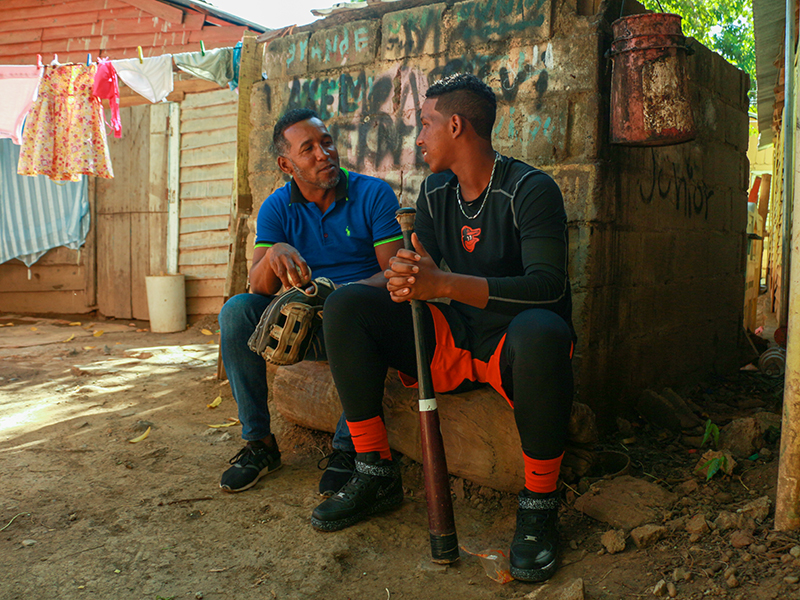 From left: On a visit home from the Orioles' Dominican baseball facility where he trains, Damián stands outside his house and visits with his father. This is the home he grew up in and where his parents and two brothers still live.

A dream shared by father and son


Damián remembers the day he learned he was accepted to the academy. It was after a game in which he felt he'd played poorly. His coach called him over for what the young man expected to be a lecture. Instead, he was introduced to an Orioles scout who informed him that he'd been accepted into the Orioles Dominican training academy in Boca Chica.

Damián couldn't wait to share the news with his dad, who'd been his first coach. He called him at home.

"At that moment, I cried and he did, too," Damián said.

Damián's father, Santos, is grateful that his son is now getting the opportunity he never did. He's also grateful for the support Unbound sponsorship provided while Damián was growing up.

"For me it contributed in a significant and huge way, Santos said. "Because in the moments when it was difficult to get food, Unbound's help appeared. If he needed clothes, medicines or educational support, Unbound always appeared. That's why I feel immensely grateful to Unbound for the support they have given to my family."

At that moment, I cried and he did, too. Papi, I'm going to make your dream come true because I'm going to be a baseball player.


Baseball requires mental and emotional toughness. The best hitters fail two out of three times at bat. The greatest pitchers have nights when they’re sent to the showers after one inning. And even Gold Glove fielders are haunted by the memories of the routine popups that turned into runs.

For his part, Damián understands that a long road lies ahead if he’s to make it to the majors. The discipline and work ethic he developed as a ballplayer taught him the value of perseverance, and he wants to inspire other young people to pursue their dreams.

“Along the way, there will be many challenges and setbacks,” he said, “but they always have to be with their heads held high. They should never believe themselves better than anyone; they must always be humble and respect people. To fight for their dreams because, sooner or later, they will come true. 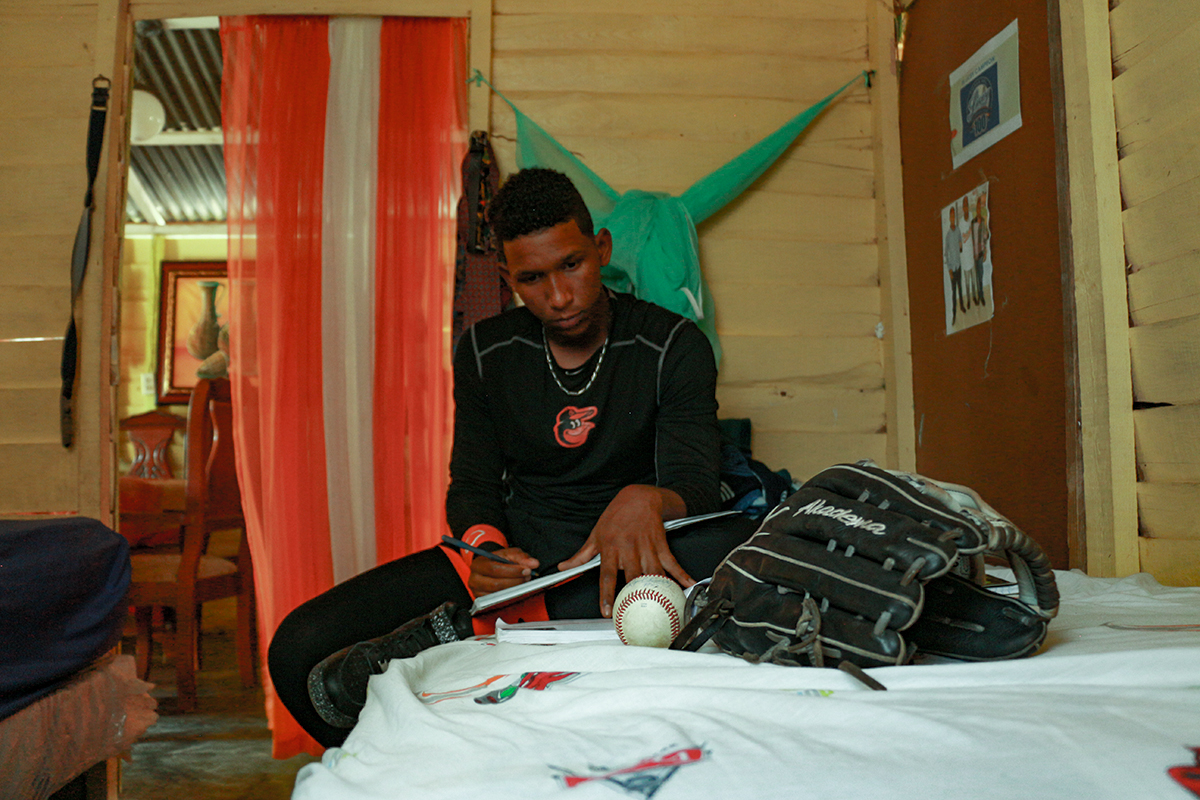 At home in his room, Damián works on his baseball skills. His father encourages him to keep notes on every game he plays so he can become more consistent.