Alberto walks from his humble home to the fields so far away.
Teresa walks to the river to bring water for this day.
Carmen walks for firewood each and every day.
Rosa walks to the mill in town with the corn to be ground today.


Those words from Bob Hentzen’s song, ”Why do I Walk?,“ describe the reality for the poor and marginalized in economically developing countries. They walk because, in their world, life is governed by necessity, not convenience. No one delivers what they require to survive. They walk or go without.

When walking isn’t a matter of choice but need, it becomes another in the seemingly endless series of burdens the poor must overcome. There’s no rest for the mother who hikes from her job at the marketplace to her home only to find the day’s tasks awaiting, nor for the student who studies between 3 a.m. and sunrise because the rest of the day will be taken up with walking to and from school, classes, and helping with household chores or caring for younger siblings.

Setting forth, with love


These realities were among the most important things Bob Hentzen discovered when he first went to Latin America as a Christian Brothers missionary. Not only did he learn why the poor walked, he also came to understand how much they cherished companionship. And, though having someone literally walk beside them was appreciated, the companionship that meant the most was the knowledge that others cared.

Bob ultimately channeled that awareness into the outreach that would become Unbound. But as he and the other founders worked to build their new organization into a viable and effective means of helping people in need, he never forgot the importance of walking alongside them. So, in Unbound’s 15th year, with the organization enjoying growth and stability, Bob decided to move with his family to Guatemala. But instead of driving or flying, he would walk the 4,000 miles from Kansas City.

Years later, when reflecting on why he felt it so important to walk in solidarity with the poor, Bob said, “… One of the things that I have tried to understand over the years is that the most vulnerable people in our world today feel isolated. … The first message then … is that you are not alone. We are walking with you.”

Bob’s journey, dubbed the “Pilgrimage of Faith,” began on his 60th birthday in 1996. It took him and his wife Cristina from the doors of Unbound’s Kansas City headquarters through Kansas, Oklahoma, Texas and Mexico, before concluding about 1 million footsteps later in Guatemala. Along the way, friends, sponsors, staff and (after the border had been crossed) sponsored persons and their families walked with him. News outlets in the various places Bob passed through helped spread the word about the man who walked out of love for the poor and the organization he represented. 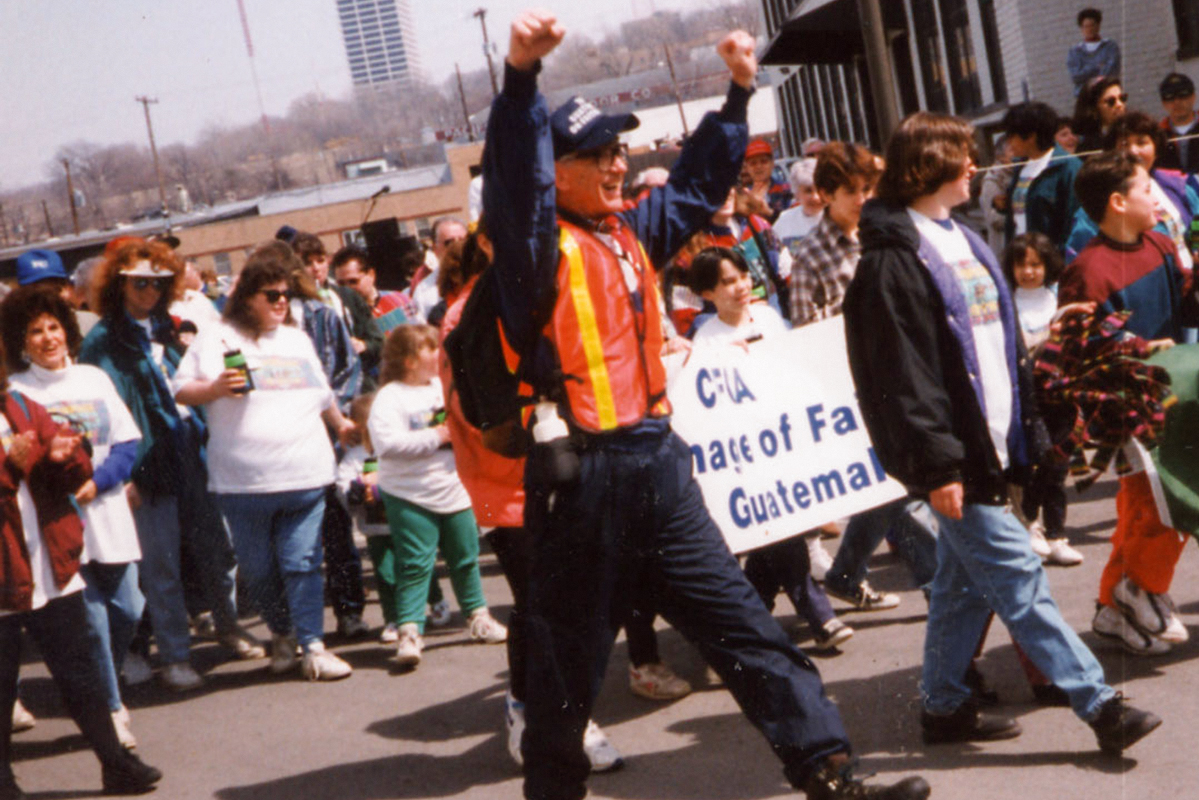 In March 1996, on his 60th birthday, Bob Hentzen sets out from Unbound’s Kansas City headquarters on his “Pilgrimage of Faith.” That first walk took him through Kansas, Oklahoma, Texas and Mexico before ending in Guatemala. (Photo from the Unbound archives)


As planned, Bob and Cristina settled in Guatemala. Bob used his new home as a base for his ongoing role as Unbound’s president. He traveled extensively on awareness trips, getting to know sponsors and staying in touch with staff and families in the various Unbound communities around the world. But as time went on and Unbound continued to evolve, Bob decided to undertake a second pilgrimage. That decision grew out of his conviction that it was vital to stay in close contact with those Unbound sought to serve.

“We told these people we were going to walk with them, and we told the plan,” Bob said. “This is what it’s going to take if you’re going to try to really work with families. You’ve got to be out there with them. You can’t stay totally in the office.”

The second pilgrimage, called “Walk2gether,” started where the first had ended, in Guatemala. It began before sunrise on Dec. 29, 2009, and would eventually take Bob, Cristina and the thousands who walked portions of the journey with them through 12 Central and South American countries where Unbound worked. Walk2gether ended in Chile a year and a half after it started. It had been a pilgrimage of 8,000 miles, twice as long as the first walk. 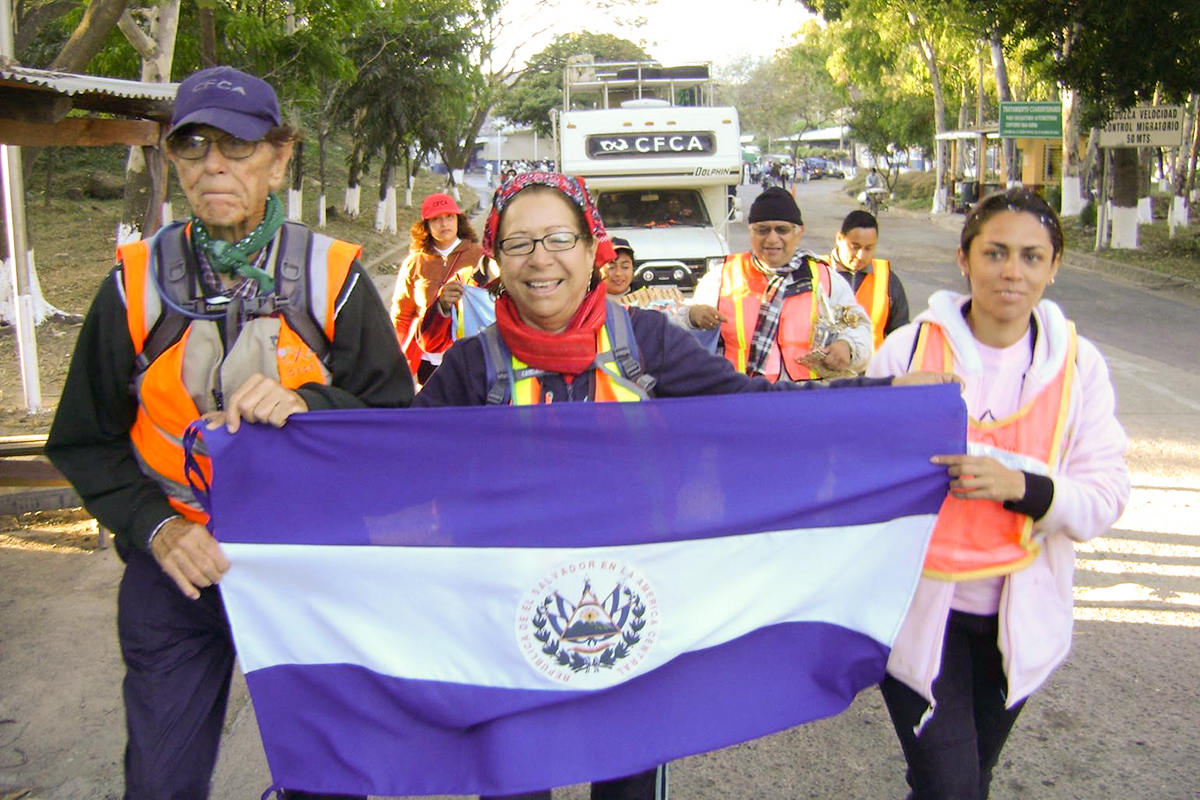 Carrying the flag of El Salvador as they walk through that country during “Walk2gether” are, from left, Bob Hentzen, his wife, Cristina, and Yessenia Alfaro, coordinator of the Unbound program in Santa Ana, El Salvador. (Photo from the Unbound archives)

A son carries on


Bob Hentzen passed away in 2013. Today, his two historic walks are celebrated by the Unbound community as reminders that the role of the organization is always to walk with the poor and marginalized. As the 40th anniversary of Unbound’s founding approaches in November, that mission remains at the forefront of all Unbound’s efforts around the world.

For one particular Unbound staff member, the walk continues quite literally. Jake Hentzen is the son of Bob and Cristina. He was a little boy when his father went on his first walk and, as a young adult, he walked alongside his parents for much of the second.

Jake recently completed his own solidarity walk across the state of Kansas. While, like his father, he wanted to call attention to the needs of the poor and the work of Unbound, he was also motivated by a desire to inspire hope as the pandemic continues to weigh on people everywhere.

“This was a way for me to say we’re going to come out of it,” Jake said. “I felt like it was a spring moment after a long winter.” 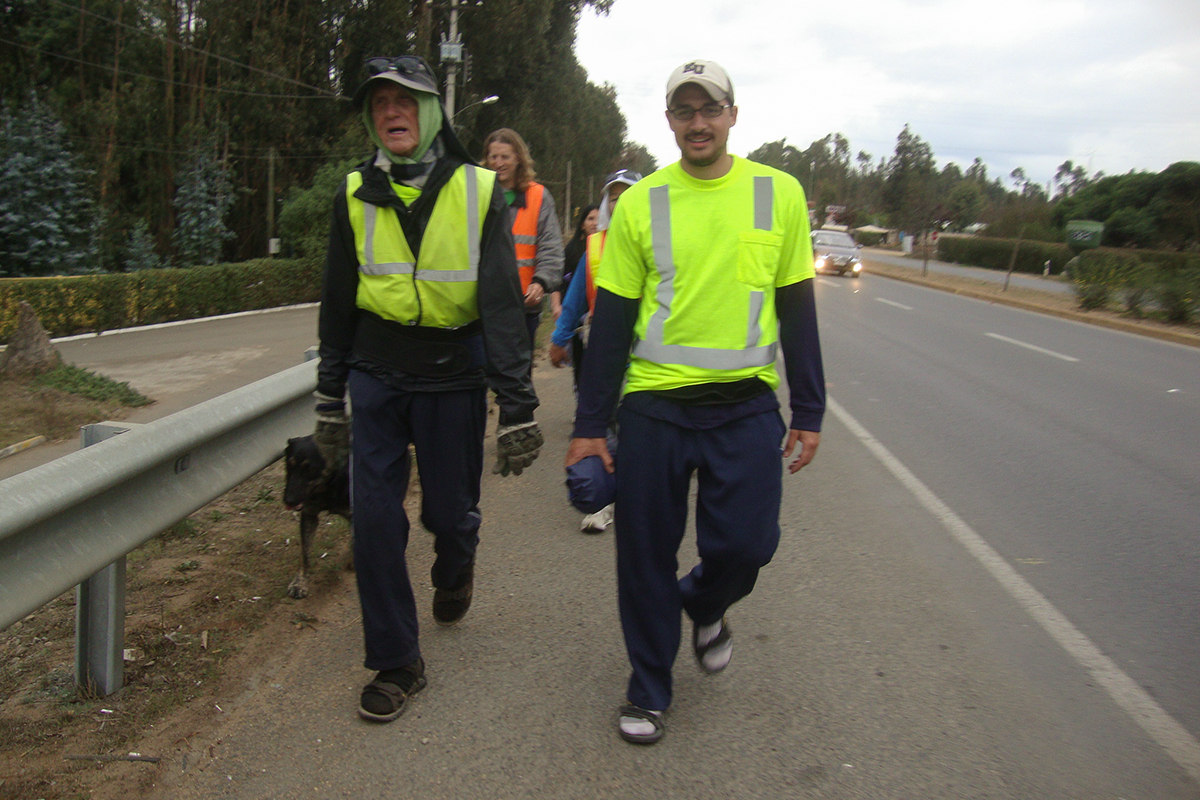 On the road somewhere between Guatemala and Chile, Jake Hentzen, right, walks alongside his father on Bob’s second solidarity walk. Now an Unbound staff member in Kansas City, Jake recently completed his own solidarity walk across Kansas. (Photo from the Unbound archives)

… One of the things that I have tried to understand over the years is that the most vulnerable people in our world today feel isolated. … The first message then … is that you are not alone. We are walking with you.