A 5.8-magnitude earthquake in Ecuador in late March left in its wake power outages, cracked roadways and damaged residences, including the homes of Unbound sponsored individuals and their families. Aid efforts for the affected families, some of them displaced, got underway immediately.

Shortly before midnight on March 26, the Geophysical Institute of Ecuador reported that an earthquake was recorded just off the coast of Esmeraldas, a location served by Unbound about six hours northeast of the capital, Quito. The National Risk and Management Service of Ecuador reported on Twitter March 28 that one fatality had been recorded and more than 300 people affected. To date, no serious injuries or fatalities have been reported among the Unbound community.

As soon as the earthquake was registered, Unbound’s Ecuador program staff utilized digital communication channels already in place to reach out to mothers in support groups in each of the cities and communities with an Unbound presence. Eight of Unbound’s program locations reported no damages from the event, but families within the city of Esmeraldas reported a total of 18 homes affected, with some structures damaged so severely that they were no longer safe for families to inhabit.

“Families communicated with us by sending photographs of their affected homes [via the digital messaging platform WhatsApp],” reported Margarita Elizabeth Diaz Ortega, Unbound correspondent in Ecuador. Because of the quick communication, the staff was able to begin work immediately on a report and a request for aid from Unbound’s Critical Needs Fund.

Among the damages to homes, families reported cracks in walls, fallen walls in bedrooms, kitchens or bathrooms, caved-in roofs and cracks in floors. 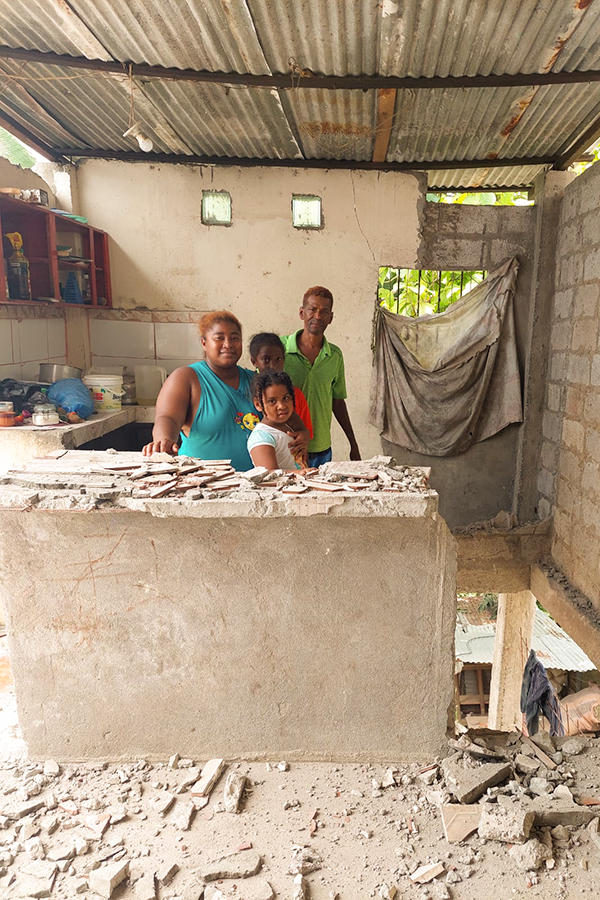 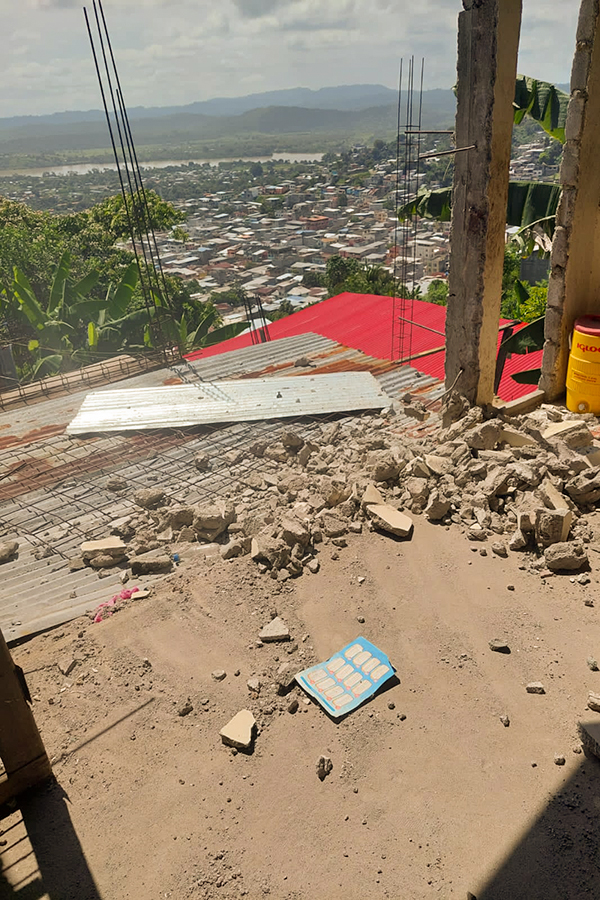 Photo 1: The cinder block home of 11-year-old sponsored child Ivanova and her family suffered two collapsed walls, including the kitchen in which they are standing.

Photo 2: The front wall of sponsored child Ivanova’s home collapsed following the earthquake. The family has continued living in the home.

'the ring of fire' versus delicate walls


Ecuador is in an area known as the Ring of Fire, a path along the Pacific Ocean between tectonic plates. The area is characterized by active volcanoes and frequent earthquakes. Ninety percent of the Earth’s earthquakes occur along this path, including the planet’s most violent and dramatic seismic events, according to the National Geographic Encyclopedia.

The strongest earthquake ever recorded in Ecuador, also off the coast of the Esmeraldas, was a 7.8-magnitude earthquake in April 2016. That event triggered a tsunami, and a total of 663 people died.

The sponsored families’ homes in the Esmeraldas area are constructed of such materials as cinder block, cement, sand, gravel and wood. Built by the hands of their own inhabitants, many of the homes lack proper foundations, rendering them no match for strong earthquakes.

The greatest damage to the homes of sponsored families was to the walls. Of the 18 families affected, nine families are still living in their damaged homes, three families are staying with relatives and four families have moved to sleep in tents outside of their homes for fear of weak walls falling on them during the night.

One such family whose home experienced extreme damage was that of 9-year-old sponsored child Jaidy, who lives in her grandmother’s home with her mother, siblings and other family members. Constructed of cinder blocks and wood, damages to Jaidy’s home included the entrance wall, two bedroom walls and four rod columns in the home, all of which will need replacement.

Sponsored child Erik, 11, and family had to abandon their home because of safety concerns and were staying with his maternal grandmother. The home, made of cinder block and wood, suffered cracks in the walls, a half-fallen wall, and damages to the wooden floor and zinc roof.

Diaz Ortega feared that, had a request not been filed quickly to access the Critical Needs Fund for the affected families, their need would have been overlooked as government entities focused on aid for urban areas.

“This space where Unbound is located is rural," Diaz Ortega said. "I want to highlight the confidence that families have in not feeling alone and looking to Unbound to help them in these cases.” 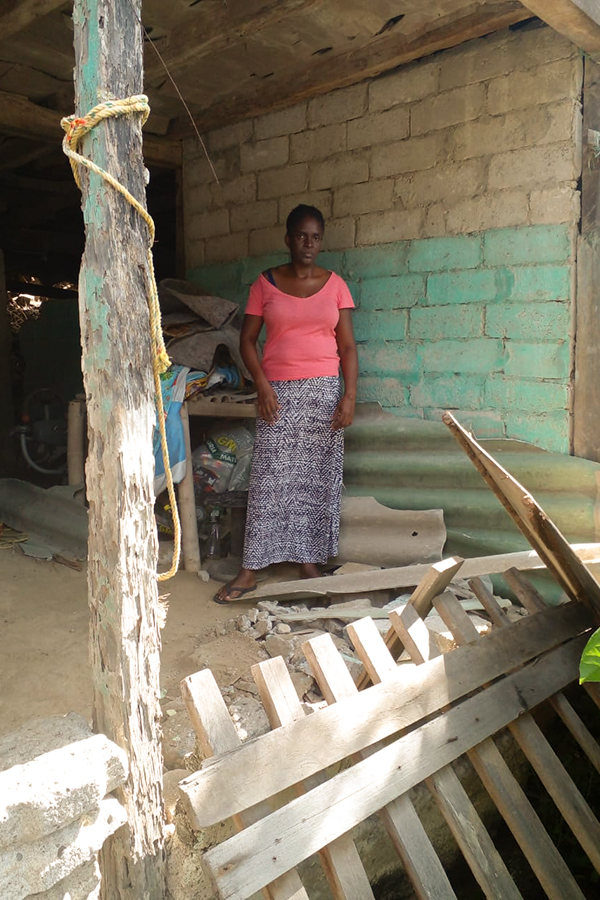 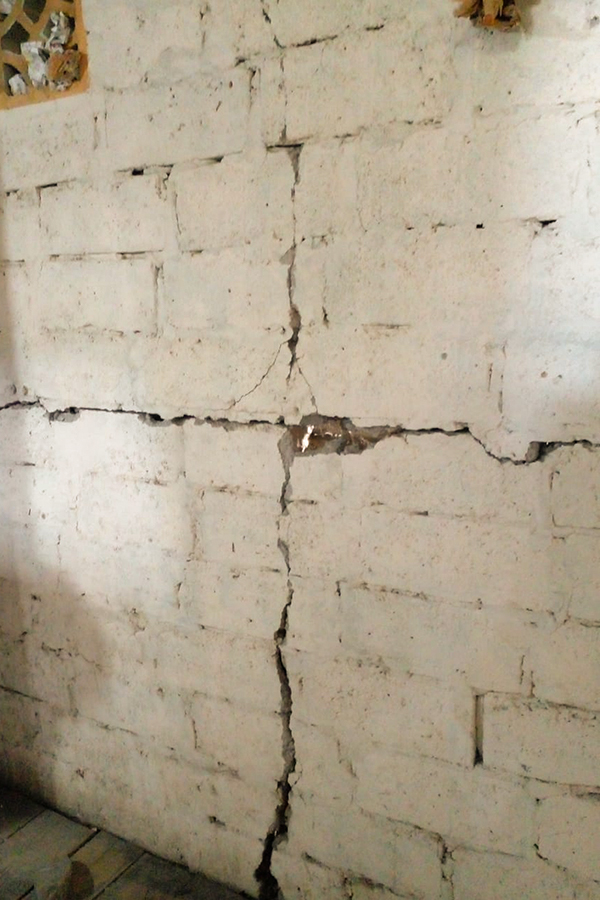 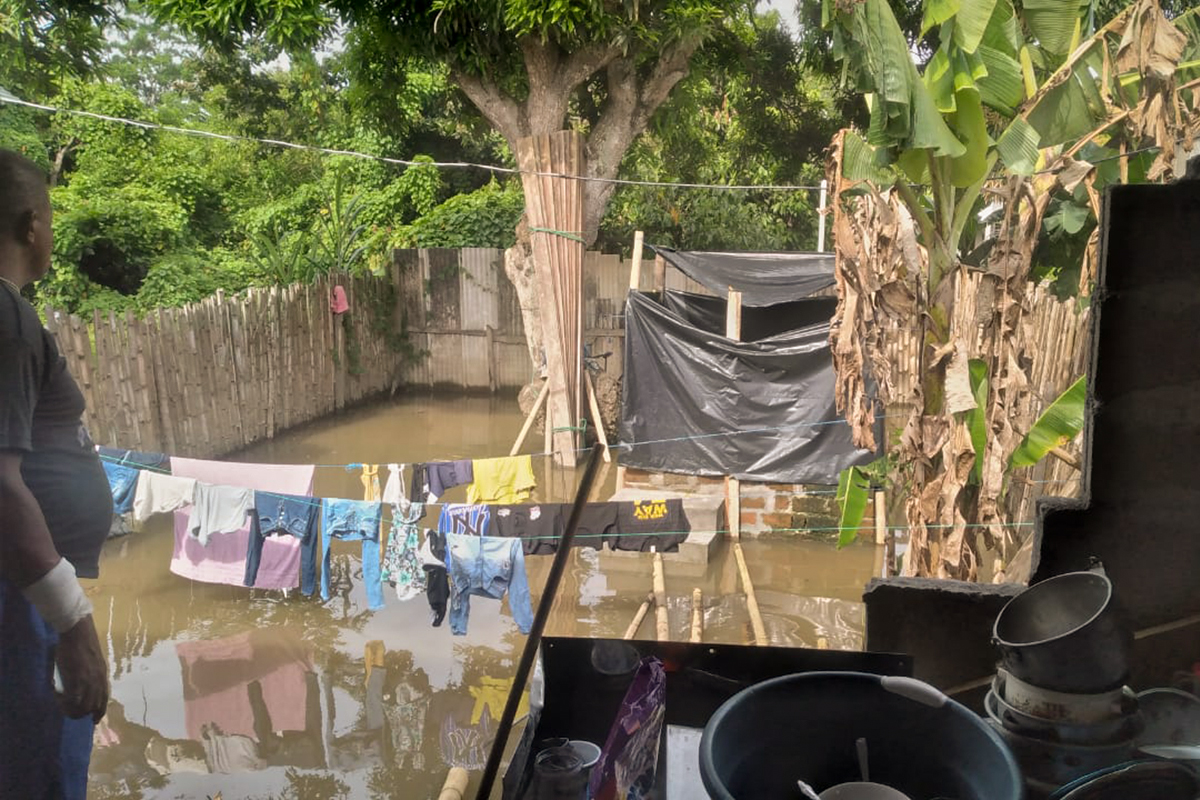 Photos 1 and 2: Pictured left, Olga, mother of sponsored child Jaidy, stands in a room of the family’s damaged home. Pictured right, eight people live in what is left of the grandmother’s home, which suffered fallen and cracked walls. The family has remained in the home, moving their items to other rooms with less damage.

Photo 3: The home of 15-year-old sponsored youth Adonis is in an area between two rivers prone to floods this time of year. Composed of cinder block and zinc, his family’s home suffered a collapsed side wall in the kitchen and serious damages to a bedroom wall.


Individual bank accounts for sponsored children, youth and elders are how most families around the world receive funds through Unbound. In times of natural disasters, health crises and other unexpected setbacks, additional assistance from the Critical Needs Fund is deployed to those most affected. For example, the fund most recently provided assistance to 240 families in Unbound’s Antipolo program in the Philippines who had their livelihoods upended by Typhoon Rai in December of last year.

In Ecuador, according to Martha Romero, Unbound's general coordinator there, second assessments of the earthquake-damaged homes in April determined that nine will need to be demolished. Critical Needs assistance will be sent via cash transfers to affected families in May to help repair or rebuild their homes.

how you can help


Even before damages are inflicted by natural disasters, most families in the Unbound community desire to improve their living conditions, but with lack of consistent income or options, these efforts often take years for those living in poverty. Financial assistance from the Unbound Critical Needs Fund helps families overcome what might seem like a dire life setback, restoring their hope for a brighter, more secure future.

There are three ways you can help the families affected by the earthquake in Ecuador: 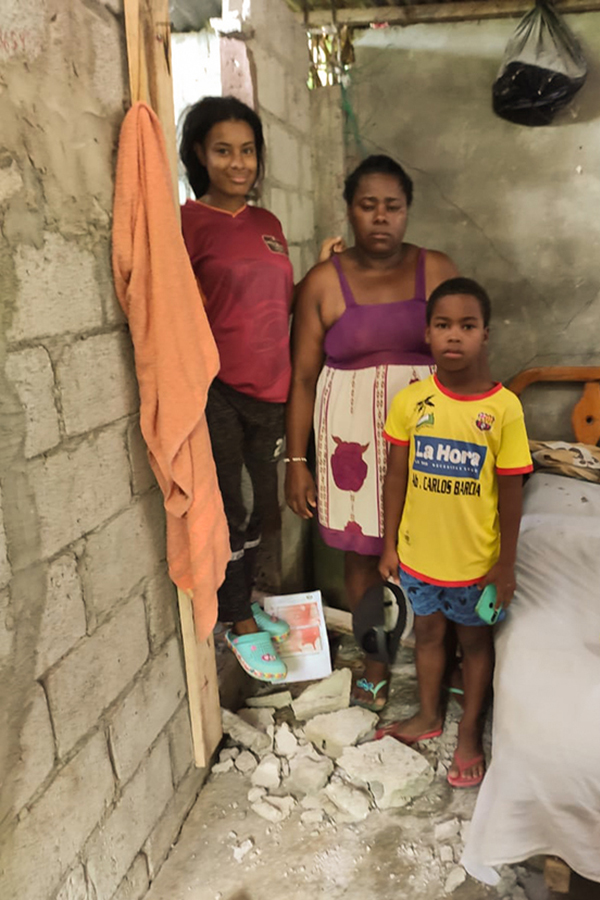 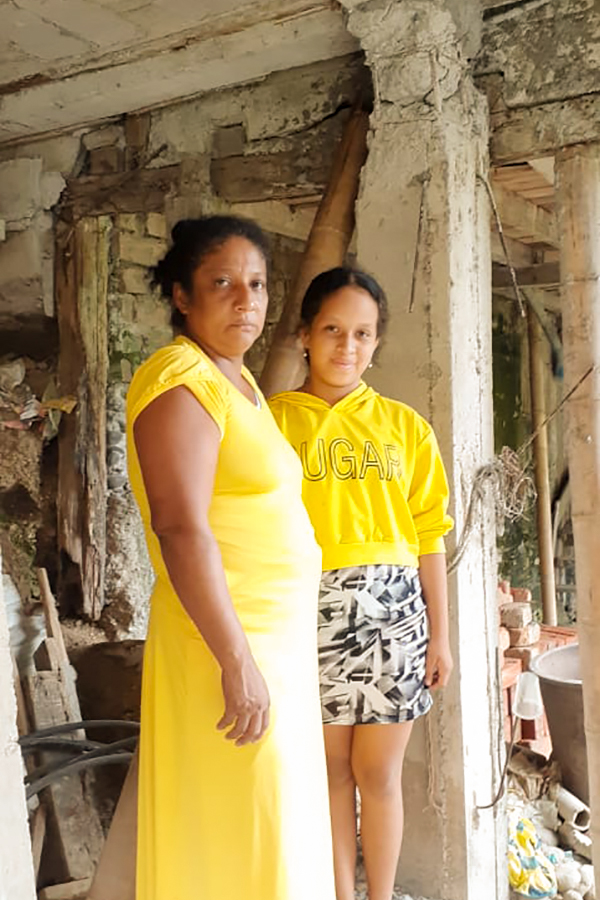 Photo 1: 18-year-old sponsored youth Josue and his family had recently begun adapting their home from cane material to block and zinc when the earthquake hit. Their new foundation suffered damage to the bedroom and bathroom walls, and the roof. Pictured are Josue’s mother, sister and brother.

Photo 2: Sponsored child Jahela stands with her mother in a room of their home where structural columns are being held in place temporarily with poles. Jahela’s father recently lost his job, and her mother sells sweets and beverages, however, her income isn’t consistent. 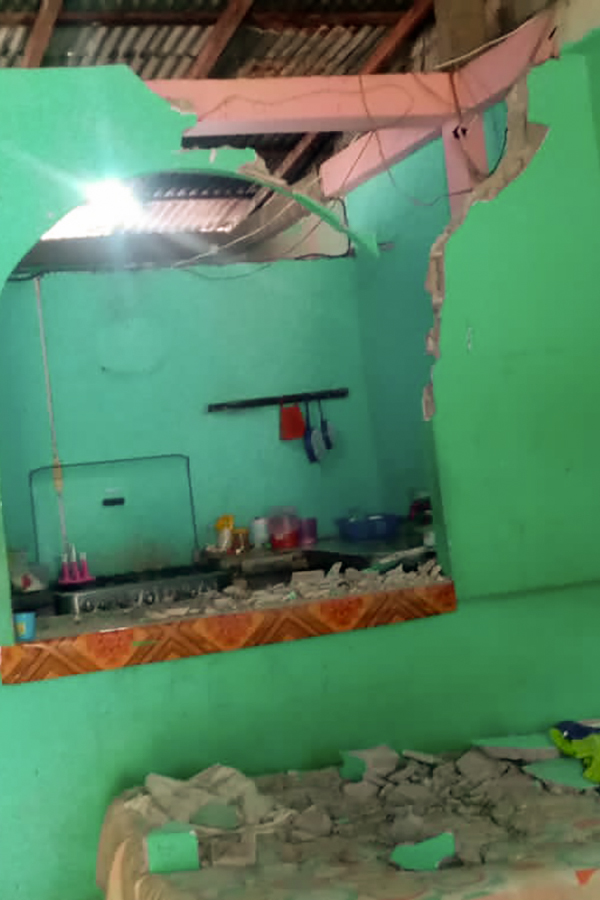 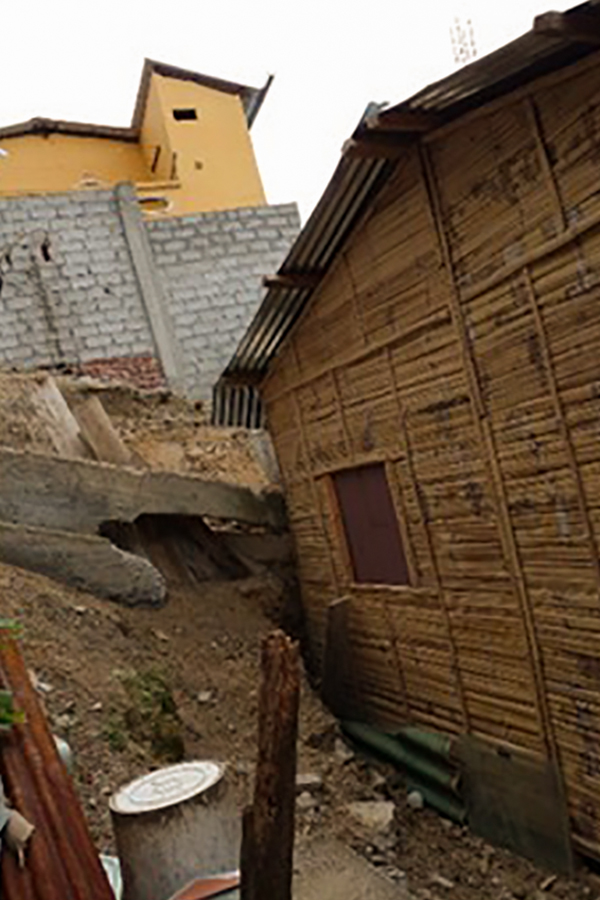 Photo 1: Pictured is a damaged wall between the kitchen and bedroom of the home of sponsored child Misael, 9. For fear for their safety, the family began sleeping in makeshift tents in their front yard at night.

Photo 2: The home of 5-year-old sponsored child Abdiel is made of fragile cane and suffered damage when a neighbor’s wall fell on Abdiel’s kitchen wall. Part of a government housing project, the home was still being paid for by Abdiel’s mother, who sometimes finds work as a food vendor.

I want to highlight the confidence families have in not feeling alone and looking to Unbound to help them [following disasters].