Angela’s happiest moments with her mother, Susan, were spent in the kitchen of their home in the Philippines, bonding over cooking. Up until she was 12 years old, Angela had never lived through a day where she did not see Susan taking care of her and her other six siblings and teaching them household chores.

“She wanted us to be independent because she said that she will not be here all the time,” said Angela, who is sponsored, in an interview with Unbound in 2019 at the age of 19.

By that time, Susan had already been working abroad for more than five years to supplement the family’s meager income. Her daily interactions with her children had been condensed into intermittent visits with them every few years and conversations via technology across their more than 4,500-mile divide.

Angela learned to fill the moments of sadness at not having her mother there to guide her by creating bonding time with her hardworking father, Rogelio, eating a meal and watching TV together.

Over the course of almost 10 years, Angela and most of her siblings would pass from childhood to youth to adulthood, becoming kind and “God-fearing” individuals, as Susan describes them. Though aware of Susan’s sacrifices for the love of her family, they would never truly be able to comprehend the sadness of a mother who misses seeing her children grow up.

For Susan, no matter how familiar she became with leaving for work abroad, the feeling of longing to be with her family always remained.

“There are still moments that I feel my homesickness,” she said. “I just have to conquer it. I just dreamed a good future for my family … to have a better home, something more than this one.” 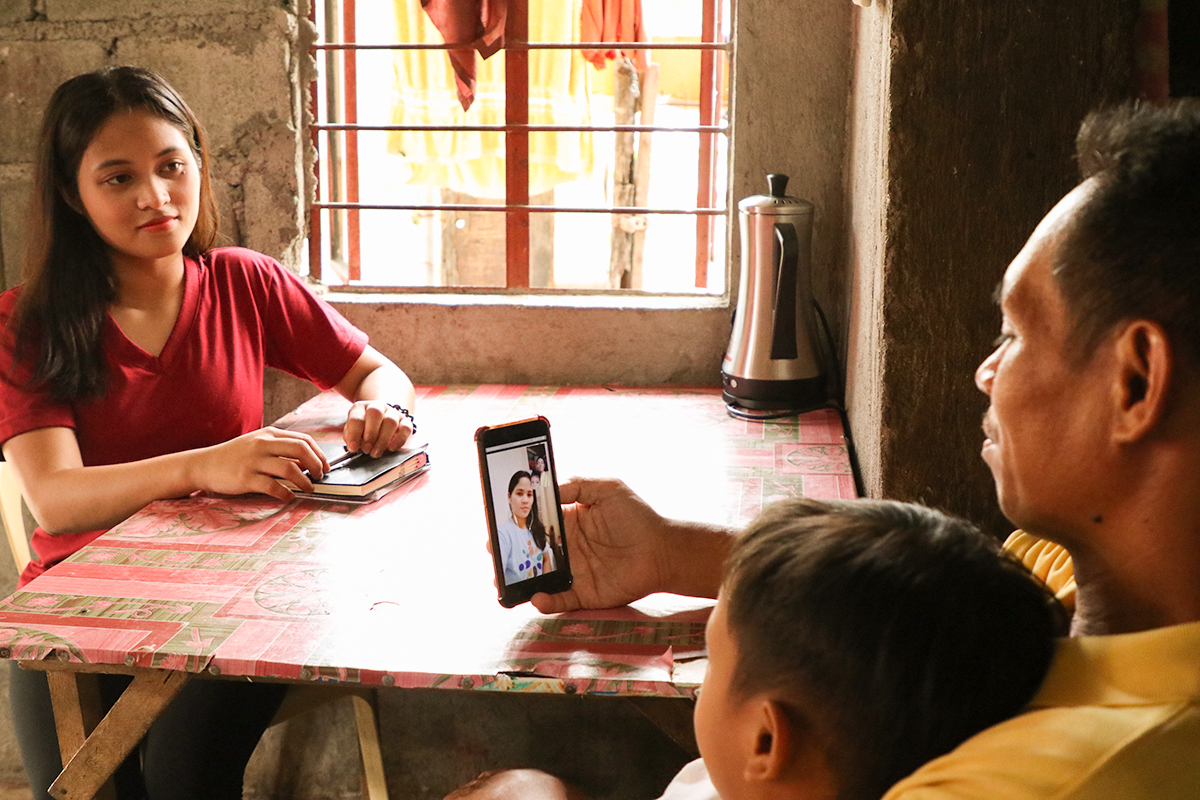 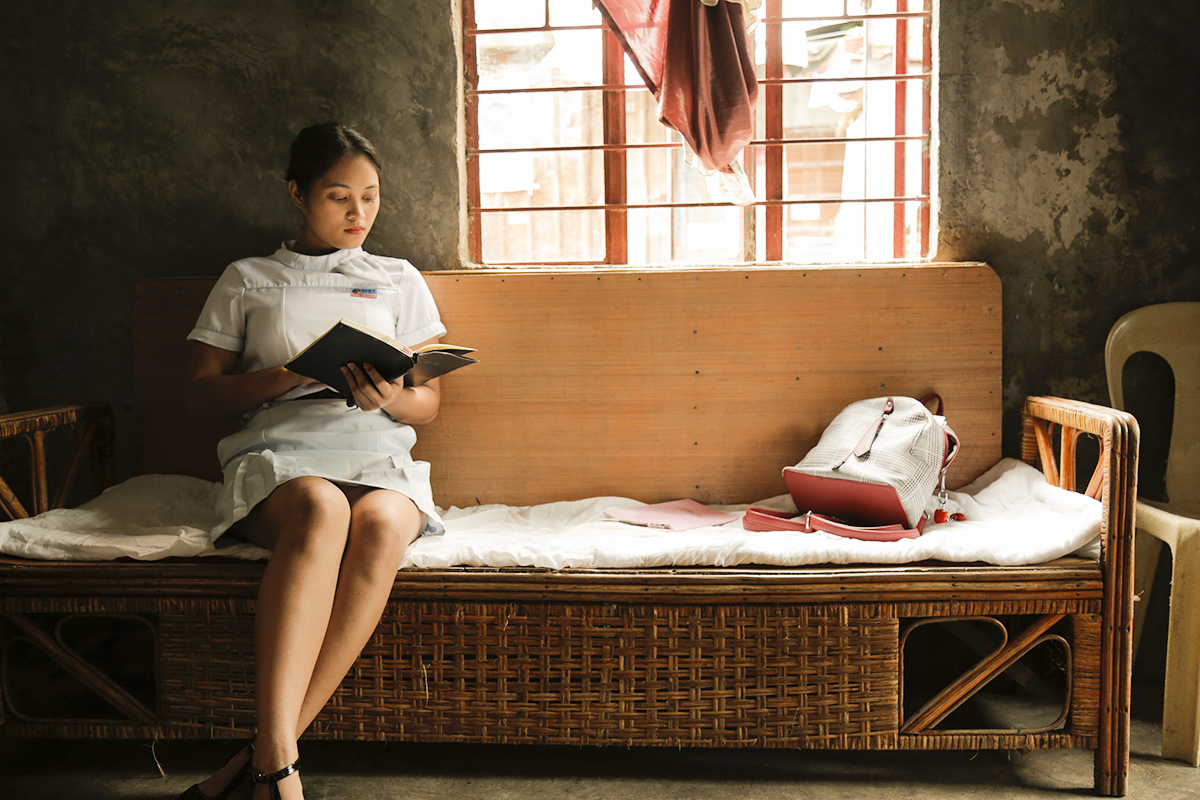 Photo 1: Sponsored youth Angela sits at the family table with her father, Rogelio, and brother Jacob, having a conversation via video chat with her mother, Susan, an Overseas Filipino Worker (OFW), in 2019. For almost 10 years, the family’s only daily connection to Susan as she worked as a nanny abroad was video chat or social media.

Photo 2: When Unbound first spoke to Angela in 2019, she was a 19-year-old student determined to get a degree and work abroad so that her mother wouldn’t have to. Today, Angela is about to graduate with a degree in hotel and restaurant management.

the starting place of love, hope and comfort


“Home” should be a place of security, happiness and belonging. Some might even call “home” a feeling, not a place.

But for Susan and her family who live in a squatter’s village on the outskirts of Metro-Manila, in a haphazard structure susceptible to severe weather, on a lot they don’t own, “home” in the physical sense means survival.

Home is their shelter, safety and escape. Having a home means their dreams have a place to take root. Already in Susan’s life, her family had been uprooted from home twice — once due to the government overtaking the squatter’s area, and a second time when Typhoon Ondoy destroyed their house in 2009. With the help of Unbound, they were able to rebuild, but the fear of the impermanence of their “home” remained with them.

“Home” was on Susan’s mind when she became an Overseas Filipino Worker (OFW). Leaving her husband, a tricycle (motorcycle with passenger cab) driver, to raise the children, Susan traveled to Malaysia in 2014 for her first position, caretaker to an elderly woman. Since then, she has worked as a nanny, once in Kuwait and twice in Qatar.

She sends almost 100% of her earnings back to the Philippines for Rogelio to pick up from the remittance company and budget for the family’s needs.

“I just focus on helping my family and improving our house so that when the rains come, water will not fall from our roof and wet our things inside,” Susan said.

Susan’s one hope for her children is to someday see them making a good living, with a permanent shelter and a comfortable life. While she’s been abroad, her children have given her the strength to get through the hard days — her children and her prayers. 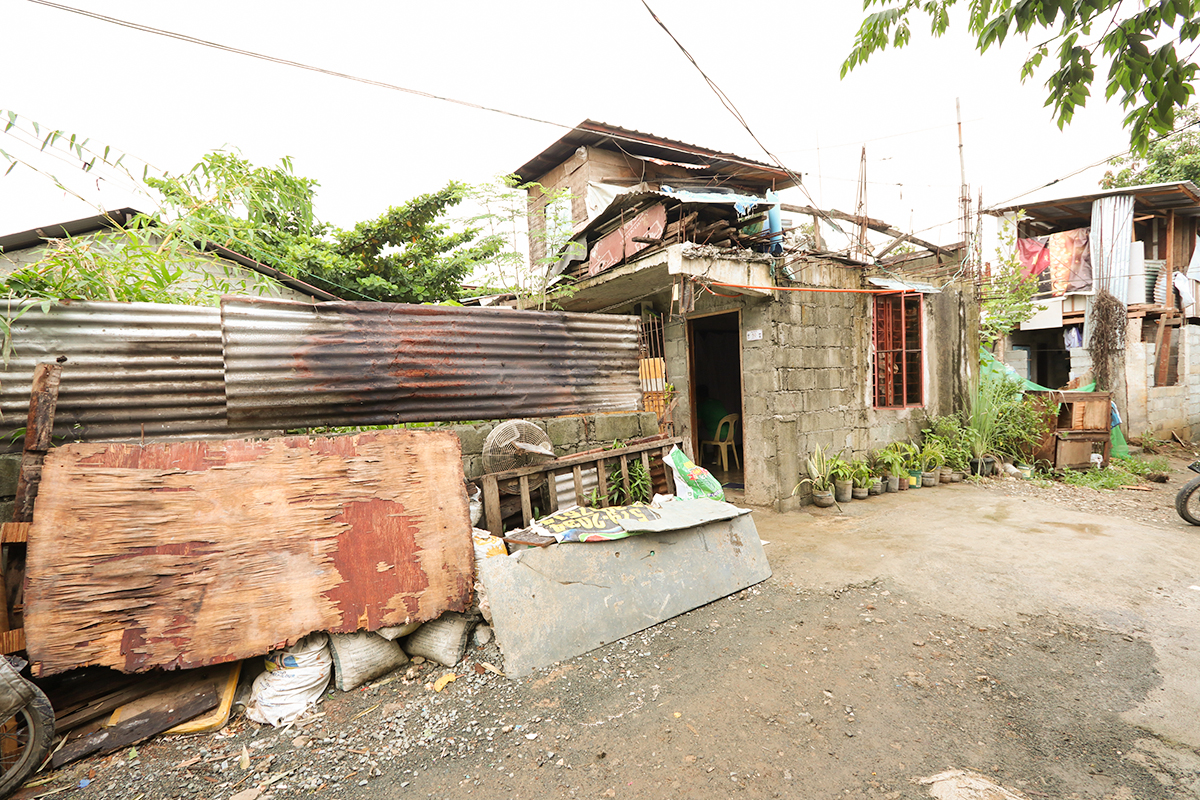 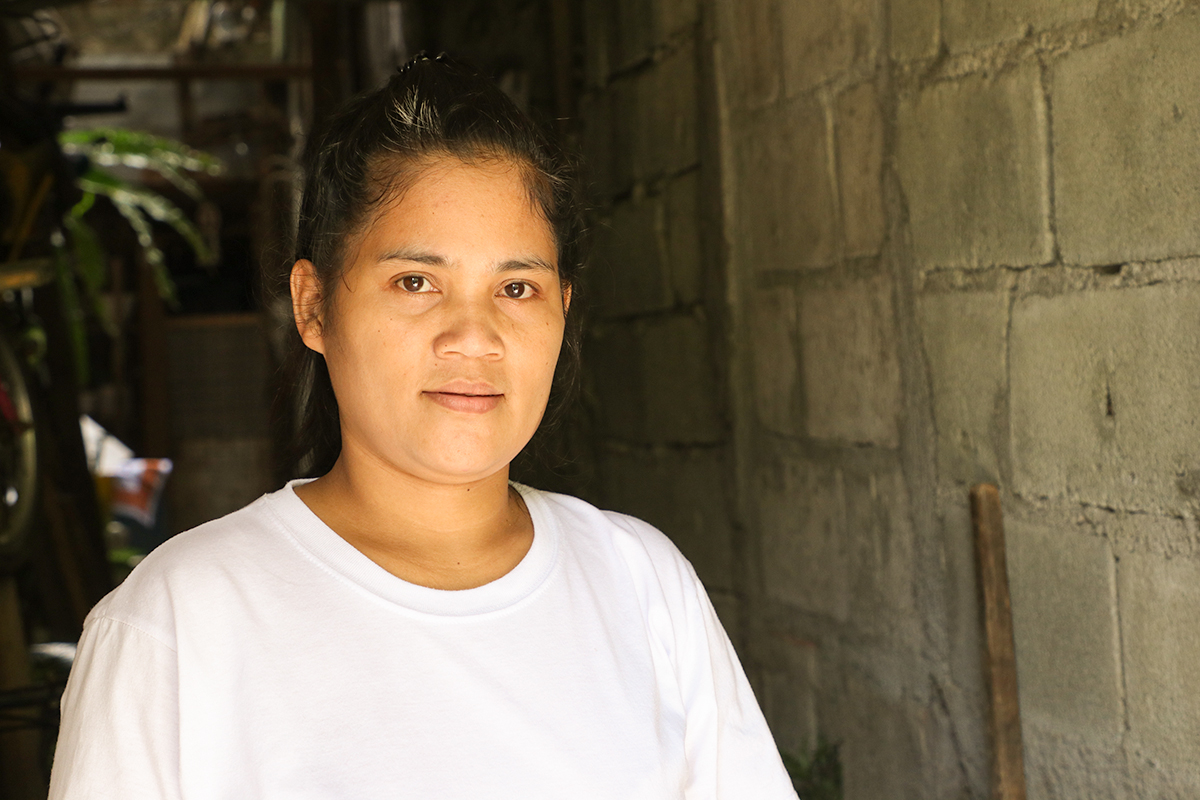 Photo 1: The family’s home in the Philippines is a great source of worry for Susan, whose main goal for working abroad was to provide a better shelter for her children.

Photo 2: Working mostly as a live-in nanny in Kuwait and Qatar throughout her 10 years as an OFW, Susan would send almost 100% of her earnings back to her family in the Philippines, which often made her dependent on her employer for daily meals.

THE PLIGHT OF THE OVERSEAS FILIPINO WORKER


As a caretaker in Malaysia, Susan recalls a happy time. Her employer, a Chinese national, taught her life lessons on how to budget her money and cook Chinese cuisine. But many of her experiences as an OFW since then have been less than bright, and she said she has sometimes experienced physical abuse, as well as food deprivation — all scenarios that are, unfortunately, not uncommon for OFWs.

Overseas Filipino Workers are often hailed as “modern-day heroes” in their society. Contributing to the Philippine government through the taxes they pay, their remittances help to sustain the country’s economy, but the opportunities for OFWs who come from families in poverty can be less than glamorous. Most recent data from the Philippine Statistics Authority estimates that 1.77 million Filipino workers labored abroad during the period of April to September 2020. Of that number, 1.06 million were Filipino women.

According to Unbound Manila program staff, it’s estimated that more than 1,000 parents of Unbound sponsored children in the Philippines are working abroad, mostly as “domestic helpers,” largely in countries in the Middle East. Coordinator Risa Vereña said Filipino mothers are typically the most in-demand for jobs such as housekeeping, nannying, tutoring or caregiving because they are known for their patience, kindness and strong work ethic.

“Plus, there are more opportunities [as an OFW] for women than for men,” Vereña said. “Most of the jobs for men require skilled labor. But mothers are also more courageous to take risks.”

The Philippine Overseas Labor Offices recorded nearly 5,000 cases of abuse of OFWs in 2020. According to the Overseas Workers Welfare Administration (OWWA), some of the most common work environment issues OFWs face include poor or dangerous living/working conditions, physical abuse, food deprivation, discrimination and exploitation, lack of community support and lack of time for self-care, among others.

With Susan’s most recent employer, she was the in-home nanny, responsible for the day-to-day running of the household, along with attending to two young children. She said her day often began at 4 a.m. and ended at 10 p.m. With her last two employers, she said, she was allowed no days off.

Susan had no close friends abroad, so she kept “all of her problems within.” She worried about Rogelio, who grew fearful over the years that she would make a new family abroad and have no need for the one that they had built together.

When an OFW decides to end an employment contract early, there are no penalties, however, the OFW shoulders all the expenses associated with returning home from overseas. During the almost 10 years that Susan worked as an OFW, she said she ended her contracts twice due to maltreatment.

In May 2022, at the age of 42 and at her family’s request due to their growing concerns for her emotional and physical well-being, Susan’s career as an OFW came to an end. 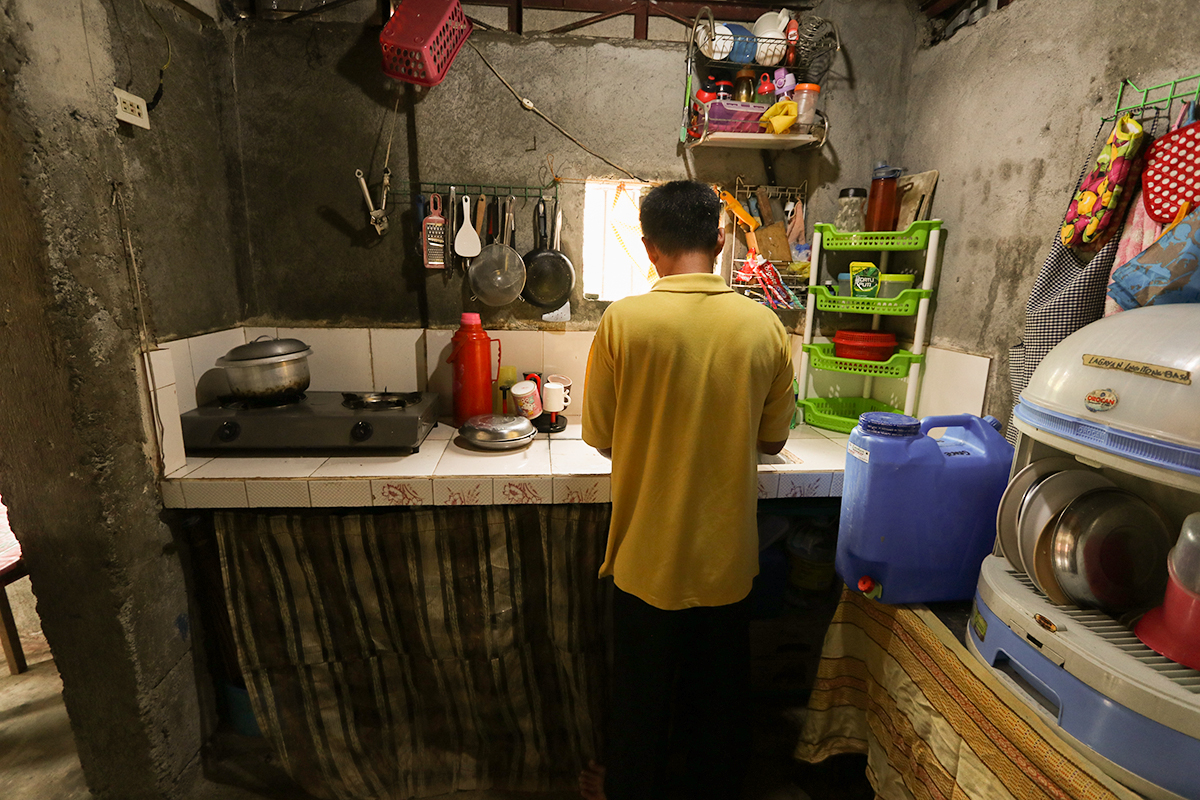 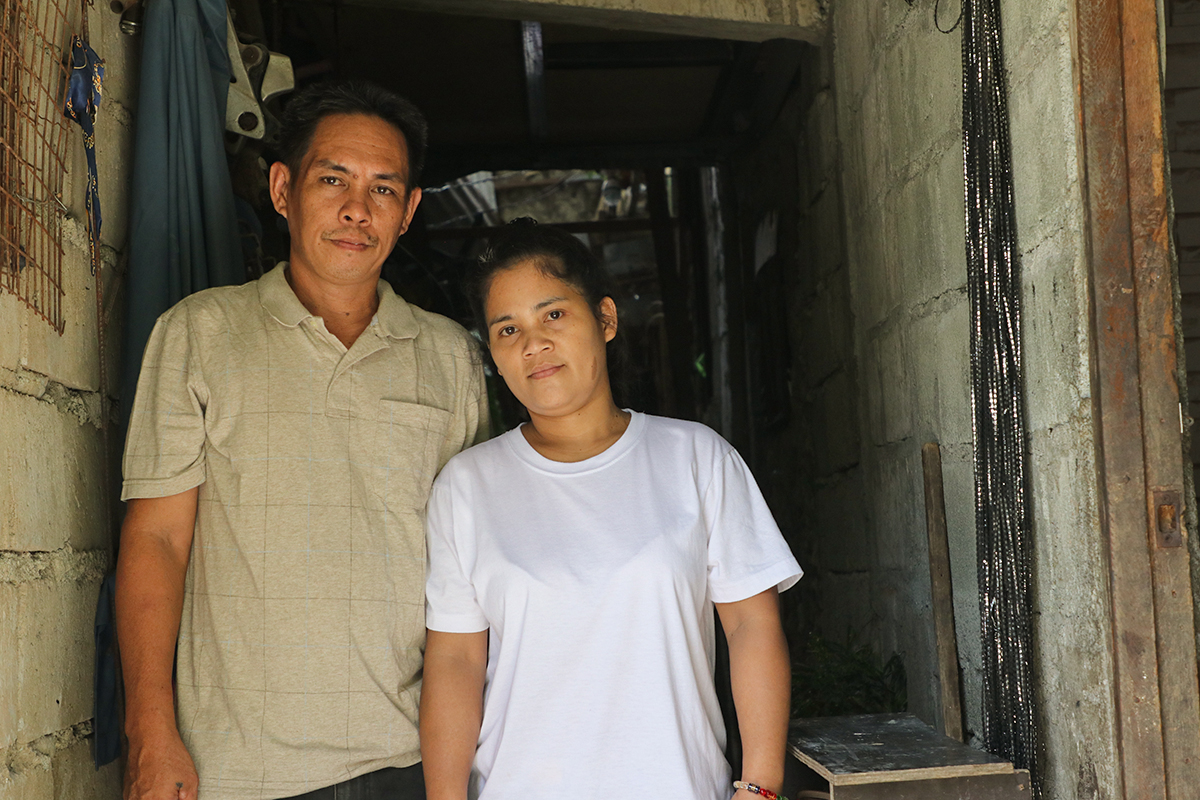 Photo 1: Through almost a decade of Susan’s absence, her husband Rogelio (pictured above in the family’s kitchen in the Philippines), raised their seven children, cooking, cleaning, working his own full-time job as a tricycle driver and ensuring the children kept up with their studies.

Photo 2: Besides the struggles Susan faced on her own in a foreign country, the distance was also hard on her marriage, as she often had to reassure Rogelio that she would return.

a chapter for susan's dreams


Raising another mother’s children while your own learn to make their way without you in another country was painful for her inside, Susan admitted. For almost a decade of their life, Rogelio alone drove her to the airport each time to begin her new contract abroad.

“I am the one who cries the most, but I do not show it to them,” Susan said, thinking of her children. “I leave them [seeming like] I don’t feel anything, but when I am in the vehicle, I will cry.”

When Susan returned home to her family for the last time in May, she closed the chapter on her OFW career. Her youngest son, who was in diapers when she first left, is now 10, and her sponsored child Angela, who is also an Unbound scholarship student, is about to graduate college with a degree in hotel and restaurant management. Susan’s decision to return home permanently is based, in large part, on her children.

“They are all grown up and can help now (financially),” she said. “They told me, ‘You don’t have to work abroad anymore, Mama; we can live with what we have right now.’”

After taking some time to herself to rest, Susan hopes to start a business — a rice or variety store — outside of her home, and she is looking forward to rejoining Unbound’s parent support groups as a parent leader. What she gained from her Unbound parent support group “spiritually, emotionally and physically” before becoming an OFW, she credits with giving her the confidence to push onward during that time in her life.

No matter how the journey changes along the way, one thing will always remain constant for Susan:

“I keep myself strong and determined,” she said. “What I do … is for my children. I will do whatever is needed to do.” 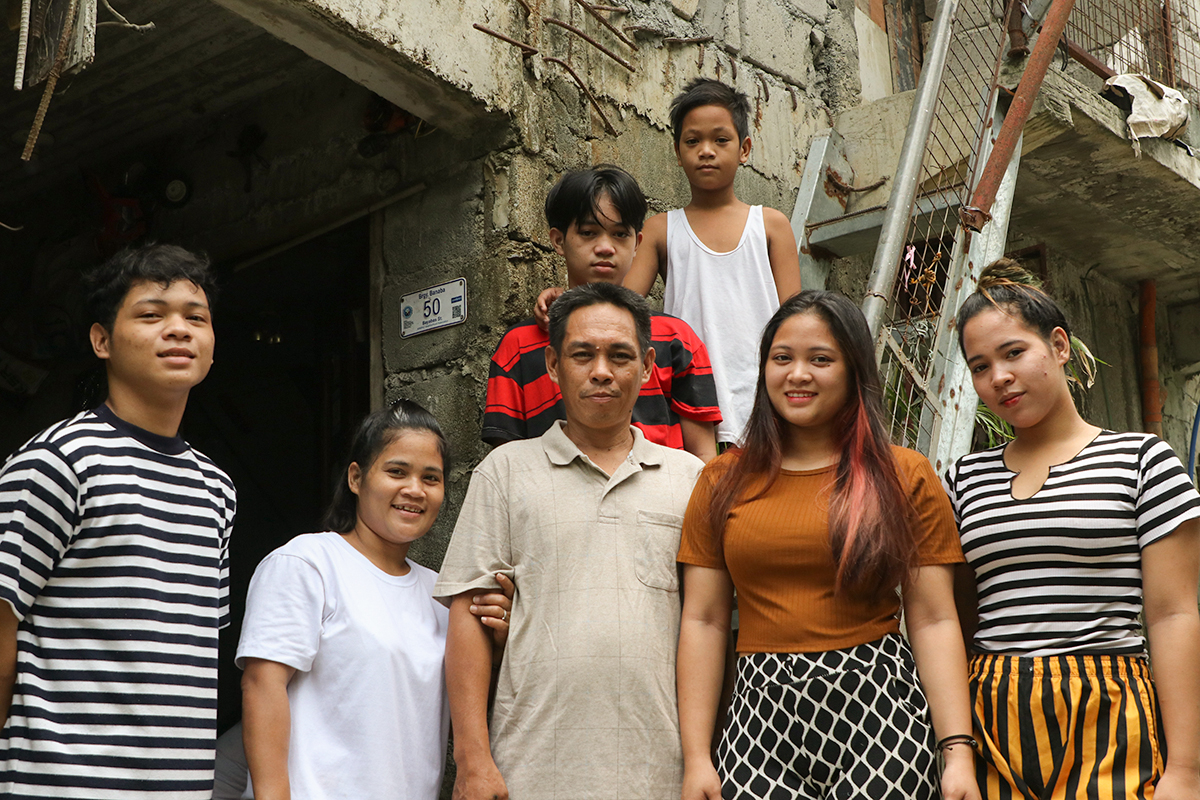 With her children mostly grown and able to help financially, Susan returned to the Philippines in May 2022, permanently giving up her OFW status. Unbound staffs encourage the families of OFWs to save, utilize their savings and venture into other livelihood opportunities. With her return, Susan plans to open a variety store out of her home. (Pictured front, left to right in present day) Rogelio Jr., 17; Susan, 42; Rogelio Sr., 43; sponsored youth and scholar Angela, 22; and Alyssa, 21. (Pictured back) Ryan, 14 (middle row) and Jacob, 10 (top row).

There are still moments that I feel my homesickness. I just have to conquer it. I dream of a good future for my family.