Costa Rican youth charts path out of poverty with encouragement, friendship from sponsors

“We want to sponsor you.”

Those five simple words hold a world of change in their underlying meaning.

For a child in poverty, those words mean better, more consistent meals, access to healthcare, and an open door to education. For a family in poverty, they could mean that necessary repairs to their home become a reality or that they move one step closer down a path toward self-sufficiency.

For 12-year-old Osmín of Costa Rica in 2012, those five simple words meant all of that, but they also meant so much more.

You see, Osmín believed poverty only existed in one’s mind, that a person is only poor if they believe they have nothing to offer the world. But Osmín knew he had potential — he just needed someone else to believe in him.

That was the year Giles and Melanie Heuer walked through his door.

the boy who never says 'i can't'


Osmín was born in Nicaragua, the eldest child of an engineer, Osmín Sr., and his wife of 30 years, Juana.

Once when Osmín was 8 or 9 years old, his father disassembled the family computer before leaving for work, telling his son he would have to find something else to play with while he was away. However, when Osmín Sr. returned home that day, his son had already figured out how to reassemble the computer and was playing on it. That was how Osmín’s love of computer systems began.

The family separated for economic reasons when Osmín was still a child, his mother Juana and younger sister Mary moving to Costa Rica where Juana had better job opportunities.

Osmín vividly remembers his journey to join his mother and sister when he was 11 years old as one of the most difficult experiences of his life. The climate was a shock to him, as Nicaragua is hot and dry while Costa Rica is cooler and rainy. In the company of an aunt, each carrying their own belongings, they crossed a vast plain of grass and treacherous mud at night to reach Costa Rica.

Despite his own humble upbringing, Osmín internalized his surroundings with the perspective of someone much older. He saw families who had less.

“I have always had the necessary things to live … a home, food, something to wear,” he explained. “For me, it was enough. Since that moment, I got my way of thinking about life, that I had to stop complaining and try to do better.”

Instead of teaching her children what it was to be poor, Juana taught them “what it is not to be poor.”

“To me, being poor is a person who does not have the capacity to want to get ahead,” she said. “When my children tell me they can’t, I tell them [those words] should not be in our vocabulary.”

Introduced to Unbound through his cousins who were sponsored, Osmín observed the activities the organization offered sponsored children and elders; he saw a way to turn any of his obstacles into opportunities.

Long before he became sponsored, Osmín dreamed of what life would be like having his own sponsor. 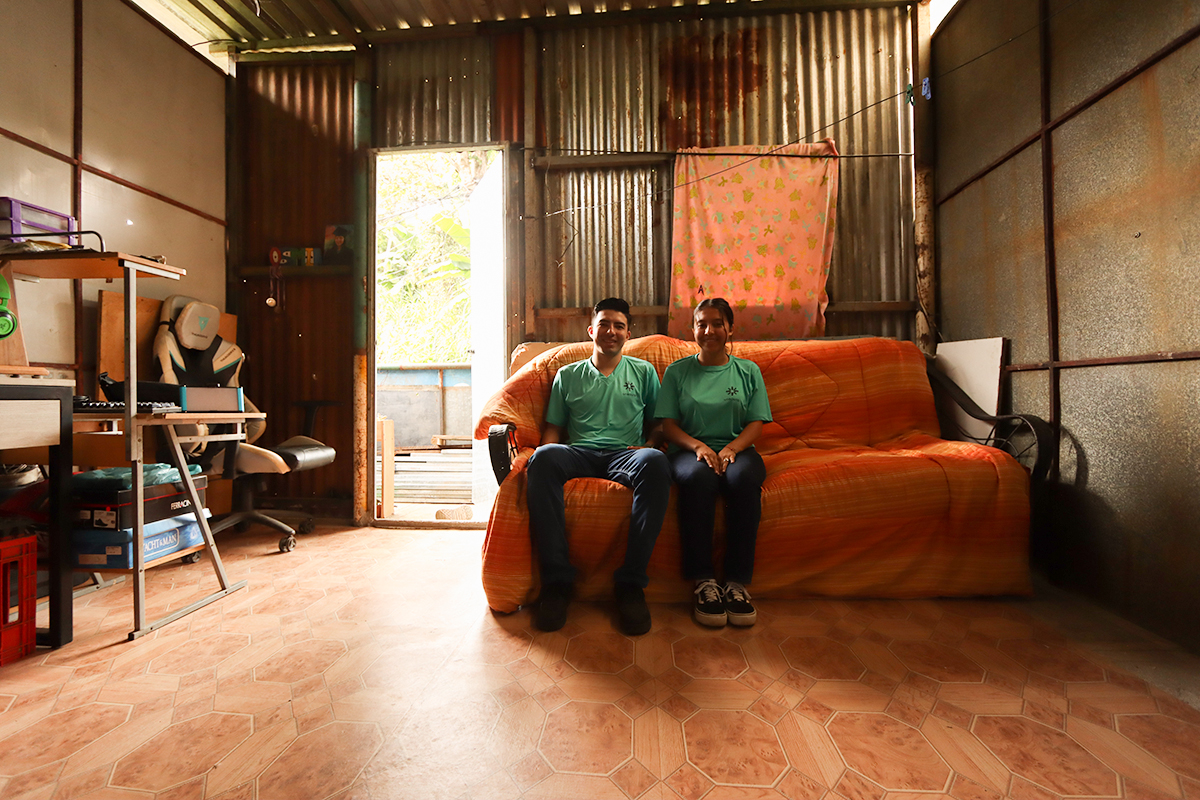 Photo 1: Sponsored youths Osmín, left, and younger sister Mary sit inside their sheet metal home in Costa Rica. Moving from Nicaragua at a young age, both children quickly adapted to life in a new country.

Photo 2: Osmín stands in front of the family home in Costa Rica. During his childhood, his mother, Juana, originally worked days at a nearby variety story and made tortillas after work to sell for additional money. Now, with some financial assistance from Unbound, she operates two successful variety stores, one located from within their home (as seen in the background).

the sponsors who believed in potential


Giles and Melanie Heuer both grew up in Milwaukee, Wisconsin, and were high school sweethearts. Melanie would eventually become head nurse at a small hospital in Waupaca, Wisconsin, while Giles enjoyed a successful career as a chief financial officer for publishing companies. They had three children and, eventually, five grandchildren.

They were attending St. Mary Magdalene Church in Waupaca one fall day in 1996 when they heard a priest with Unbound speak about child sponsorship. Moved by the priest’s presentation, they decided to sponsor their first child through Unbound, a 9-year-old boy from Costa Rica named Victor.

Over the course of the next 25 years, the Heuers would sponsor more than 20 children, youth and elders from almost every region of the world where Unbound has a presence.

“You know, life is pretty good here in the U.S., but some countries are just struggling,” Giles said. “People around the world need help. I can afford to help them, so I sponsor.”

The Heuers would eventually retire to Fort Meyers, Florida (to escape the snows of Wisconsin), and they became members of St. John XXIII Parish in Fort Meyers. Besides their sponsorship commitments to Unbound, and occasionally giving to the organization’s scholarship program, they also supported a local charity in Fort Meyers called St. Martin des Porres Outreach Ministry. Both were involved in the charity’s after-school program for poor and homeless children, and Giles held a role on the board of directors and as treasurer.

Unfortunately, Melanie passed away in 2020, on the couple’s 57th wedding anniversary. Today, Giles continues his commitment to his sponsored friends, supporting a total of 14 children, youth and elders through Unbound. His children and grandchildren write letters to half of his sponsored friends, but Giles directly communicates with the other half himself.

One of those was a young boy in Costa Rica named Osmín. 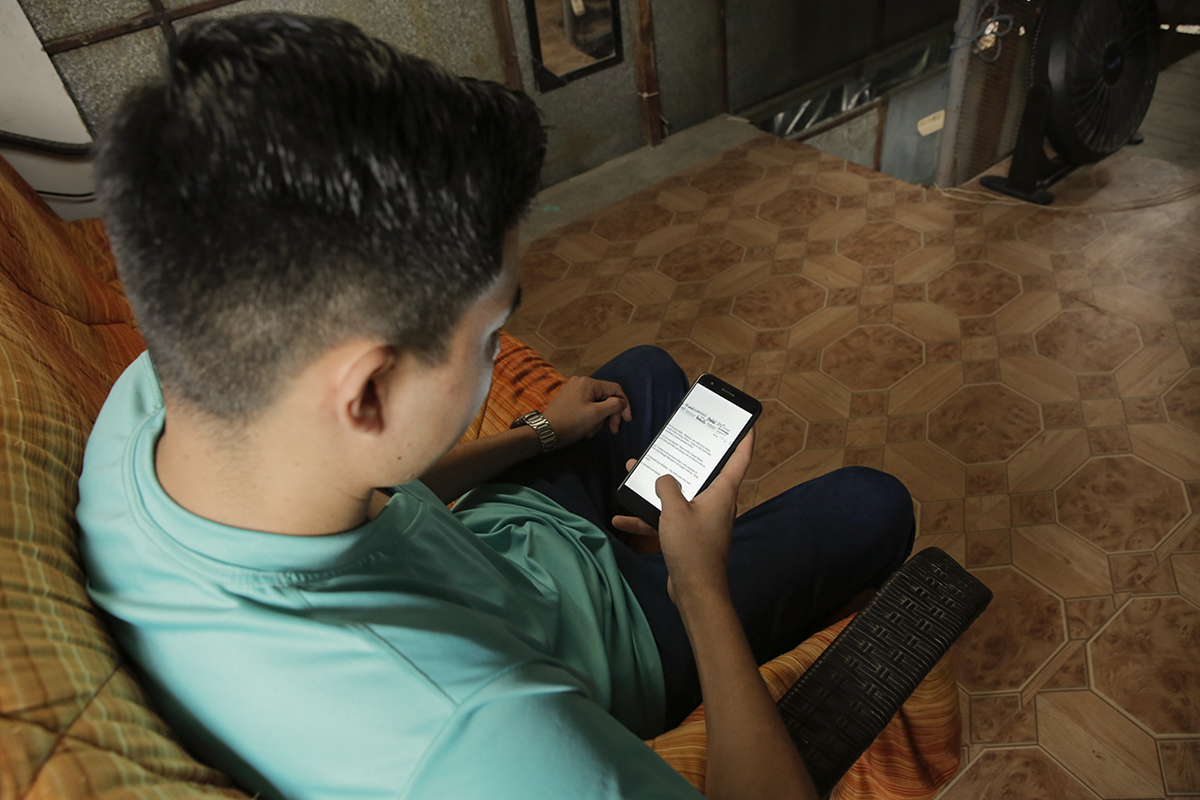 In present day at his family home in Costa Rica, sponsored youth and Unbound scholarship recipient Osmín reads a digital letter he received from his sponsors, Giles and Melanie Heuer, and reflects on his 10-year relationship with the couple.


In 2012, the Heuers embarked on an Unbound Awareness Trip to Costa Rica to meet their first sponsored child, Victor, who at the age of 25, was retiring from the program. While in Costa Rica, an Unbound staff member took the Heuers to visit with Osmín, his sister Mary and his mother Juana.

Osmín and his family talked about their hobbies, their past lives in Nicaragua, their dreams and their goals for the future.

“During the conversation, Osmín kind of broke down, and said he couldn’t understand why no one wanted to sponsor him,” Giles said. “That’s when we knew, and we said, ‘We’ll sponsor you both.’”

“This is a moment that will always be in my mind,” said Osmín, now 21. “My mother even cried. Their visit was something special; we got to know them and to feel close to them [in person] … it is something that I completely appreciate and think of to this day.”

Osmín, his family and the Heuers would spend the next 10 years communicating through letters, growing from sponsored friends to "family” from across the distance, even mourning Melanie’s passing in 2020 along with Giles.

“I can say that I tell them everything,” Osmín said. “Even though I am not his [Giles’] real family, I can see how his love is always there for me. Practically, they have taught me to have faith, to trust… I have learned not wanting to move backward and, that if in any moment I feel weak, I must look to God — his Gospel will allow me to keep moving forward.” 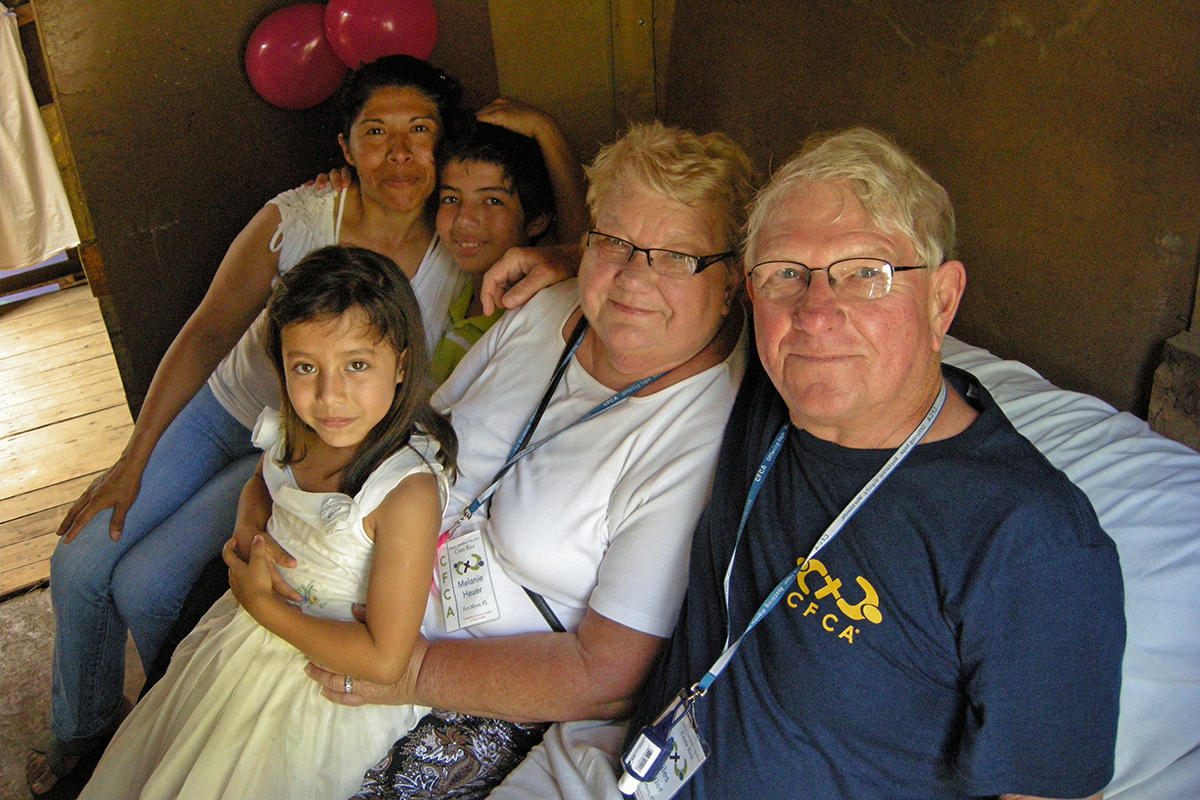 Giles and Melanie Heuer of Fort Meyers, Florida, decided to sponsor Osmín and his sister Mary in 2012 while visiting the family on an Unbound (then called CFCA) Awareness Trip to Costa Rica. The Heuers have sponsored more than 20 children, youth and elders throughout their 25 years with Unbound. (Pictured from left to right in 2012): Juana, mother of sponsored children; Osmín, 12; Mary, 7; Melanie Heuer and Giles Heuer.


Education was one thing that has always been important to the Heuers. At one point while Osmín’s mother was struggling financially to pay for her son’s college tuition, the Heuers gifted them with additional funds that allowed Osmín to continue with his studies.

“I always encourage him to learn, to go to school and to work at it,” said Giles. “For people in poverty, education is super important; education gives them the possibility of a good future. I know Osmín will succeed, and his sister, too.”

Today, Osmín is one exam away from graduating from the Latin University of Costa Rica with a degree in systems engineering. He completed an internship as a code developer for a company in mid-2022 and is already working a full-time job in his field. As an Unbound scholarship recipient, he is also active with the organization in his community, planning teaching materials and hosting workshops for sponsored families.

With some financial support from Unbound, Osmín’s mother, Juana, has also been able to expand a variety store she opened when Osmín began college. Family-owned and operated, the business has done so well that Juana has been able to open a second store in another community.

Osmín’s goal for the future is to work in systems engineering abroad, and he is taking classes to improve his English. To him, Unbound is strength and inspiration.

If Osmín were to meet his sponsors face-to-face again someday, he said he would give them a strong hug and a sincere thank you.

“They can be sure that one day, I will try to help a child just like they did me.” 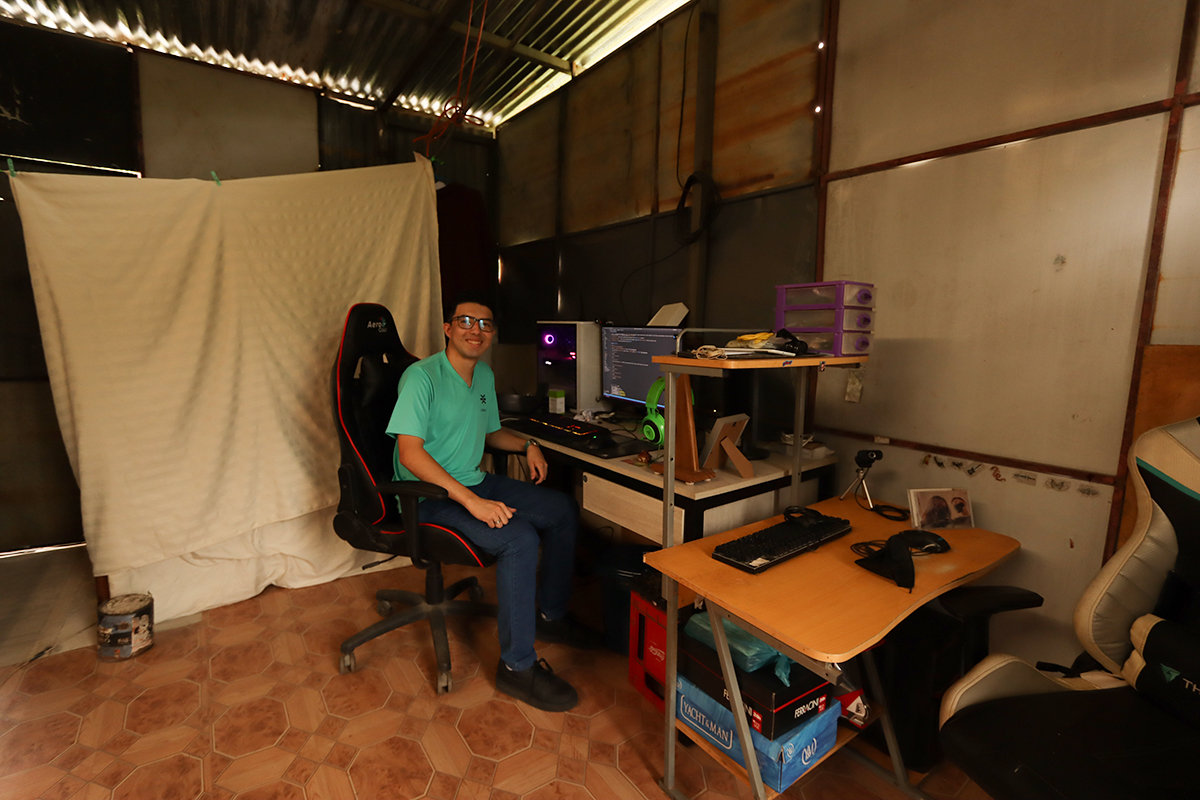 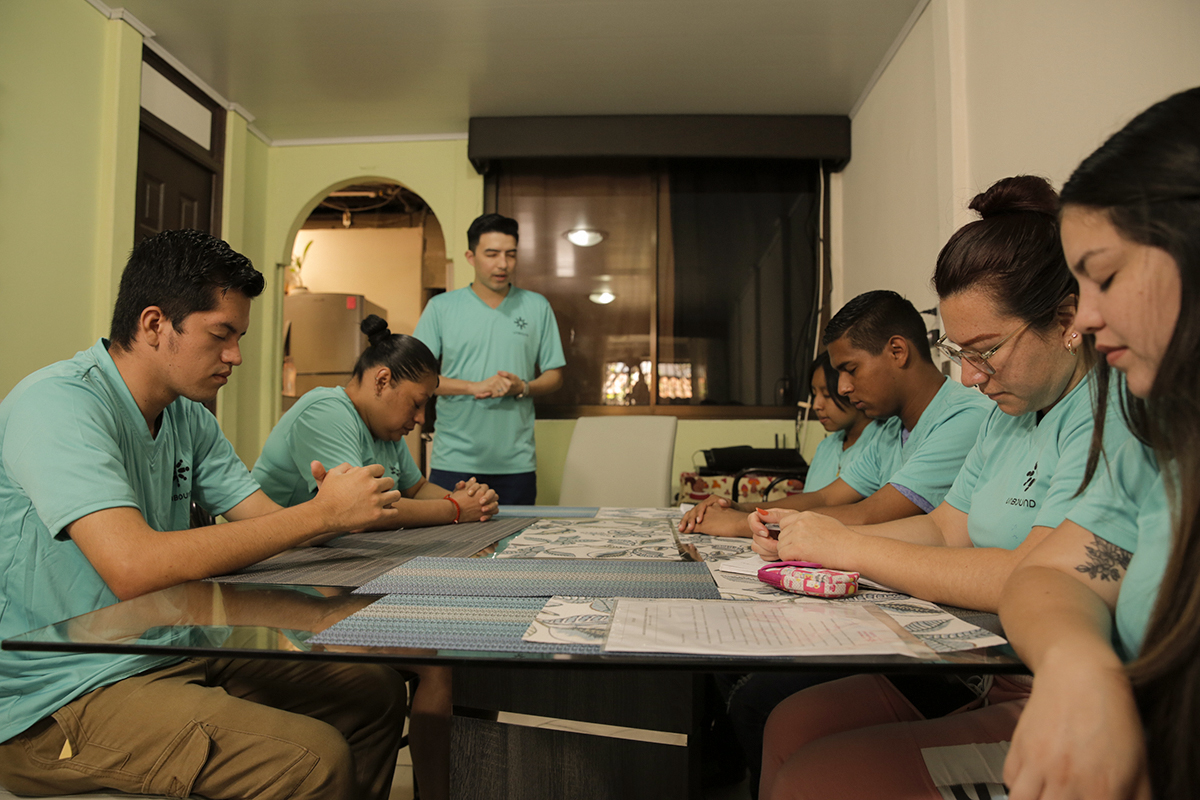 Photo 1: Osmín sits in front of his computer at the desk in his family home in Costa Rica where he completes his homework for his systems engineering degree. Though he already has a full-time job working in his field, his larger goal is to one day work abroad remotely, and he is taking classes to improve his English.

Even though I am not his [sponsor’s] real family, I can see how his love is always there for me. Practically, they have taught me to have faith, to trust … I have learned not wanting to move backward.