Coping in the Pandemic

In an area called Agent Quarter in Nairobi, Kenya, Eunice, mother of sponsored child Nixion, stands in her shop among brightly colored backpacks and clothing, quietly hand-sewing a red pullover. A purse with the words “Boss Lady” emblazoned upon it in bold white font dangles from a display near her head.

The onslaught of COVID-19 in 2020 collapsed many of the small businesses in Eunices’ area, sending former owners to search for daily casual labor jobs just to feed their families, but Eunice was determined to persevere. With a lot of resilience and a little bit of help from Unbound’s Critical Needs Fund at the opportune time, Eunice has been able to sustain her once thriving school uniform-making business, pivoting to also make and sell other products.

Her family’s pandemic survival story is one of many. 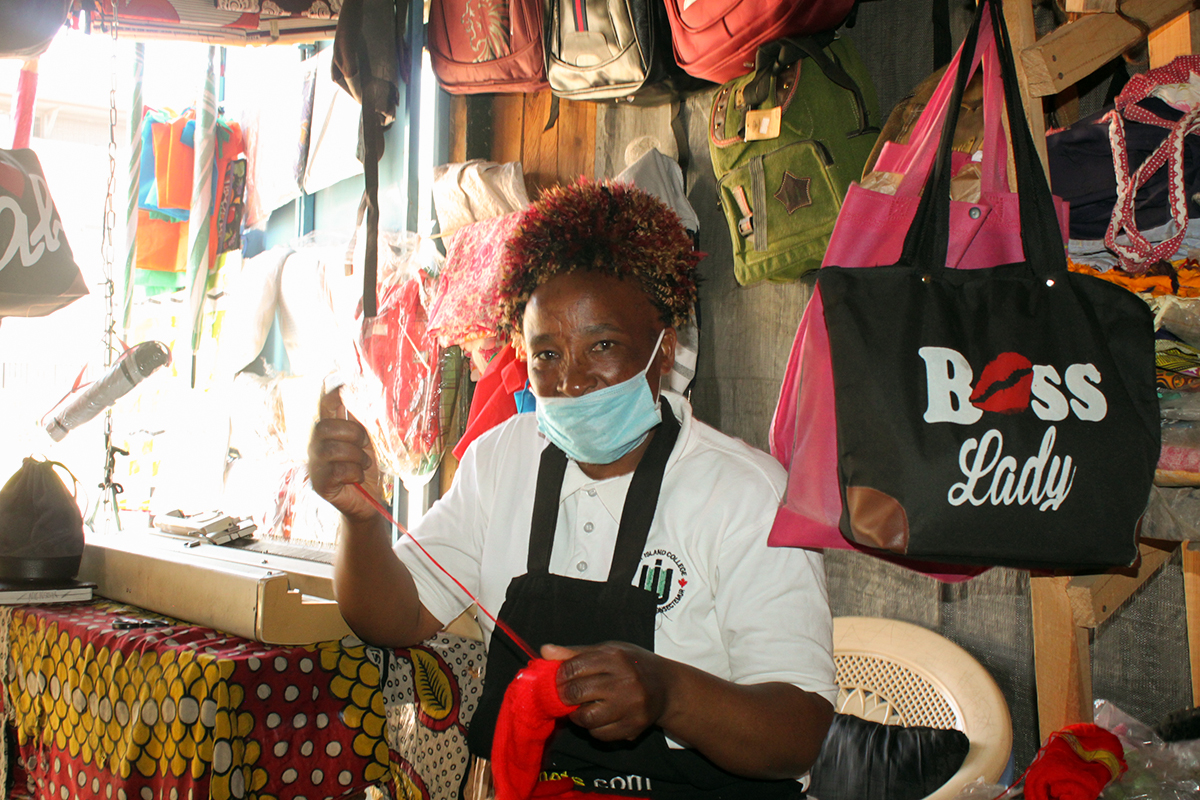 For over five years, Eunice, mother of sponsored youth Nixion, has sold hand-sewn items in her Nairobi shop to provide for her family. With help from the Unbound Critical Needs Fund, she was able to keep her business open throughout the pandemic, expanding her product offerings to the point that she was able to finally employ someone to help her with the sewing and selling.


In an update on the pandemic’s global effects on poverty in October 2021, the World Bank made a sobering statement that “three to four years of progress toward ending extreme poverty are estimated to have been lost.” About 97 million people are living on less than $1.90 a day now, increasing the global poverty rate from 7.9% to 9.1%.

Thus far, the pandemic has had major economic and health impacts on every nation in the world, specifically reducing employment, creating loss of income, increasing food insecurity, allowing for fewer protections against violence, exacerbating mental health issues and amplifying inequalities.

With Unbound communities already living below the poverty line, these setbacks have taken a disproportionate toll on them, forcing many to seek new sources of income, relocate their families or put their children’s schooling on hold, among other things.

Through the Critical Needs Fund and other sources, Unbound has continued to provide essential support via cash transfers to sponsored individuals and their families throughout the crisis, increasing the amount of funding each year since the pandemic. Pandemic assistance also came from sources such as general donations, investment income and unrestricted estate gifts. In 2021, Unbound sent $5.5 million in pandemic assistance to support those most heavily impacted and, thus far in 2022, has sent more than $600,000.

Families utilized the funds for items that became deeply essential during the pandemic, such as tablets, laptops and mobile devices needed for children to continue with virtual schooling, or to pay for cell phone bills or internet services. In many of Unbound’s projects, staff saw families using funds for immediate consumption — such as purchasing food — which was a diversion from their typical benefit plan.

According to Unbound International Evaluations Manager Becky Findley, this switch during the pandemic often meant the difference between families having food or going hungry and is a testament to the resiliency of Unbound’s program model in a crisis situation.

“Because of our model of direct benefits where cash is transferred directly into families' accounts, we were able to support our global community at a time when many other organizations that relied on in-person benefit delivery were struggling to do so,” Findley said.

Funds have also had longer lasting implications for some families. Daisy, sponsored mother of Jamaica from the Philippines, was able to recover the family’s store, their greatest source of income after her husband and older children lost their jobs during the pandemic. She is one step closer to realizing her plan of expanding her store into a mini market in front of their home.

“I will reach it little by little. …” Daisy said. “We are learning a lot from [Unbound] to make our living more sustainable.”

Hannah, a sponsored youth also in the Philippines, was able to use her funding to purchase an electronic device that enabled her to continue virtual classes, and her family also needed to use the funds for food after her mother lost her job as a fabric marker for a garment company. But the family’s struggles reached a heightened state in August 2021 when a fire broke out in their neighborhood, turning more than 15 homes, including theirs, into ash. Unbound quickly responded, providing funds to rebuild their home.

“I am crying out of happiness,” said Hannah’s mother, Estrella. “Without Unbound, we don’t know where we get money to rebuild our home.” 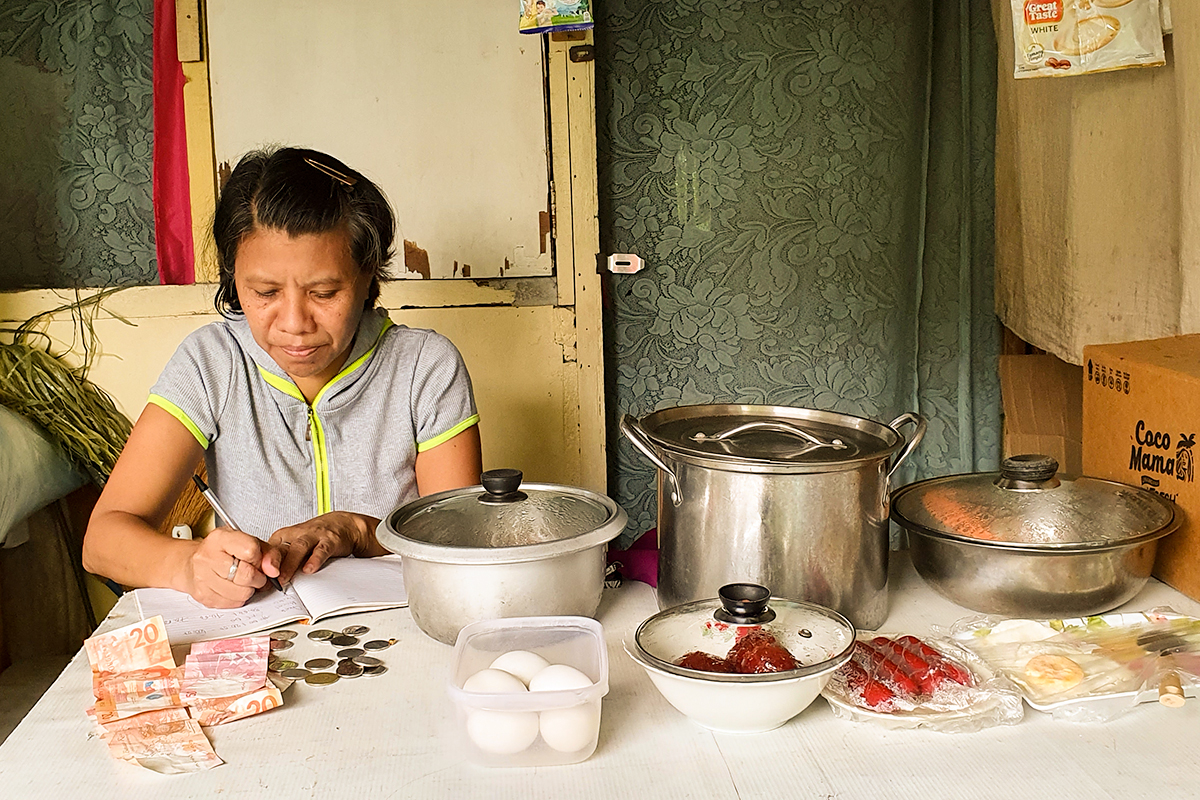 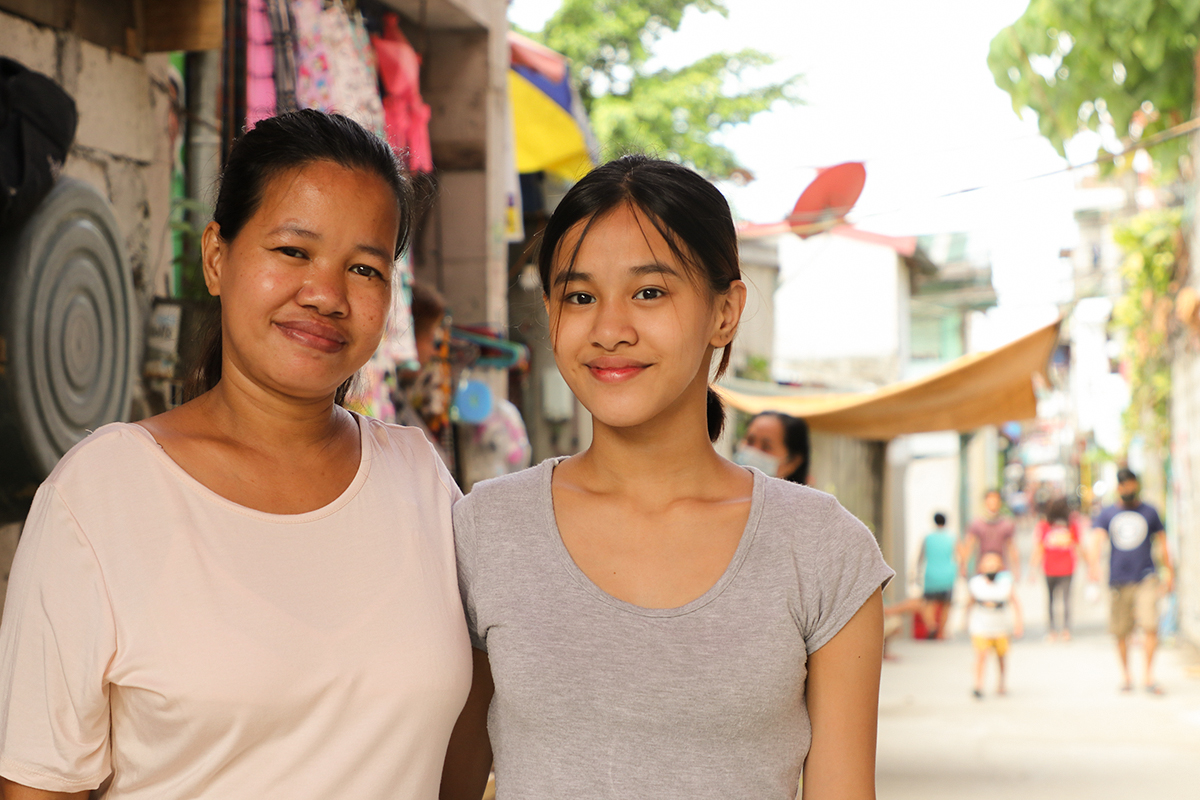 Photo 1: Daisy, a mother of three in Quezon City, Philippines, used their Unbound Critical Needs funds to purchase new stock and reopen the family’s store during the pandemic. Daisy’s dream when she was young was to be a financial manager. “I am actually doing it now,” said Daisy, who manages the finances for her business.

Photo 2: Sponsored youth Hannah (right) with her mother, Estrella, from the Philippines received Critical Needs funds to rebuild the home they lost in a fire. After Estrella lost her job as a fabric marker at a garment company in the pandemic, she taught herself the process of making string rugs (doormats) out of scrap fabric. She makes 10 pieces of rugs per day to sell at the nearby market for 13 pesos each (or 26 cents USD).

SHIFTING BACK TO GOAL-ORIENTED FOCUS HARDER


For many of Unbound’s sponsored individuals and families, education is a dream made more attainable through sponsorship, but the pandemic exacerbated their already existing lack of resources and widened the digital divide.

For example, in Unbound’s Jharkhand Lahanti program in India, staff report that 98% of mothers there do not know how to read or write, creating a great challenge for them in helping their children with their online classes.

Compound scenarios like that with others like a lack of access to internet, the inability to afford necessary electronic devices and the pressure students feel to help their families financially, and it is easy to understand why countries across the globe have reported an increase in school dropout rates. Unbound programs where an increase in school dropouts has thus far been noted include Jharkhand Lahanti, India; Kisumu, Kenya; and Quezon, Philippines; though Unbound Director of International Programs Dan Pearson said hard data on school dropout rates is difficult to come by.

“We’re seeing that the longer schools are closed in some areas, the greater likelihood that some students won’t go back,” Pearson said. “It’s just hard to make the shift back from helping your family — earning money — to paying money for school.”

What little data Unbound does have on dropout rates comes from evaluations of Guatemala, Legazpi, Philippines, and Bhagalpur, India, but does not show an increase in dropouts among sponsored youth so far, according to Findley. In fact, 96% of the students who were not enrolled reported that they had plans to return to school, with 76% planning to return within three months of the evaluation.

Unbound staff at the program level in other areas are working directly with youth who might be finding it more difficult to make a return to school. According to Rogelio De Vera Jr., correspondence department head and scholarship program coordinator for Unbound's Quezon program in the Philippines, the distance learning modality has affected not only students’ interest in continuing their studies but their mental health as well.

De Vera and team have provided several ways for youth to overcome the challenges they might be facing, from encouraging them to get technical vocational training and counseling them on their original goals, to helping them find support groups to join on social media and advising them on how to save some money from their income to help them return to school.

“For the students who stopped their schooling because of work reasons, [we encourage them] to continue to fulfill their educational goal, for education is the only wealth they earn that will never be [taken] from them,” De Vera said. “We remind them about their goals. They can rest for a while … [but] challenges are normal, and they must persevere to achieve their dreams in life.”

[We advise school dropouts] to keep going. We know it is not easy, especially [in] this season caused by the happenings around us, but we know one day their hard work at school will pay off. Just trust the process because the Lord our Creator and Unbound [are] behind them, toward the achievement of their goals and aspirations in life.

UNBOUND CONTINUES TO EVALUATE AND INNOVATE


At the end of the day, the pandemic, despite its many hurdles for Unbound and its community, has not changed the overall focus of the mission — to walk with the poor and marginalized, listening to families not just on a global scale, but at a local and personal level as well — and this will continue through a well-structured evaluation program.

“It is through evaluation that we learn about the experience of participants in Unbound,” said Findley, who noted that in the past two years, COVID was the most frequently evaluated topic at the program level, with more than 20% of evaluations focused on families’ needs and outcomes related to the pandemic.

“This is how we listen, and they lead the program,” Findley said.

Over the last two years, Unbound has witnessed the resiliency of individuals and families. Food-stand owners have shifted to food delivery, hairstylists have shifted from cutting hair to doing how-to videos on YouTube, while others have learned the power of advertising their business offerings on social media and WhatsApp. According to Pearson, mothers groups have become a critical touchpoint for families during the pandemic, reaching out to families who’ve slipped through the cracks, delivering messages, and organizing meetings and activities.

“Going forward, Unbound will continue to refine some of the tools we have introduced because of the pandemic (such as contactless letters),” Pearson said. “We would like for families who have access to smartphones to have a way to make their own photos and to write digital letters.”

Though still some years off, Pearson said Unbound is working toward the option of a digital delivery system for all parts of the correspondence process, an Unbound app that will eventually allow families to manage their participation in the program, further helping them to design their overall personal walk with Unbound.

‘UPLIFTED FROM THE GROUND’


In Eunice’s shop in Nairobi, sponsored youth Nixion takes the sweaters his mom has sewed and joins the parts, a skill Eunice taught him from a young age. He dreams to see the business grow and become big, because “this is what sustains our household.”

When Eunice received the Critical Needs funds, she said they “uplifted [her] from the ground.” She immediately used them to feed her family, but also to purchase a bale of thread, which she is now busy using to sew school uniforms to ensure she has ample stock. When the schools reopen, her family, and their business, will be ready. 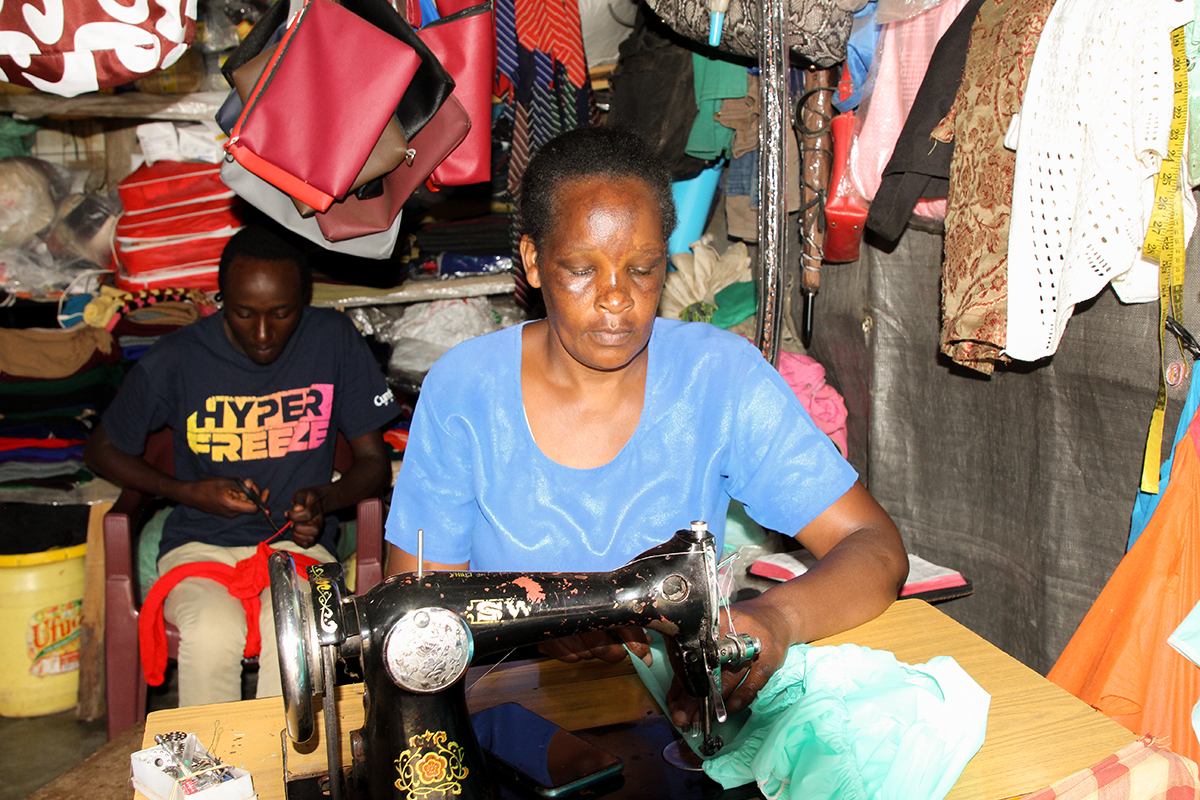 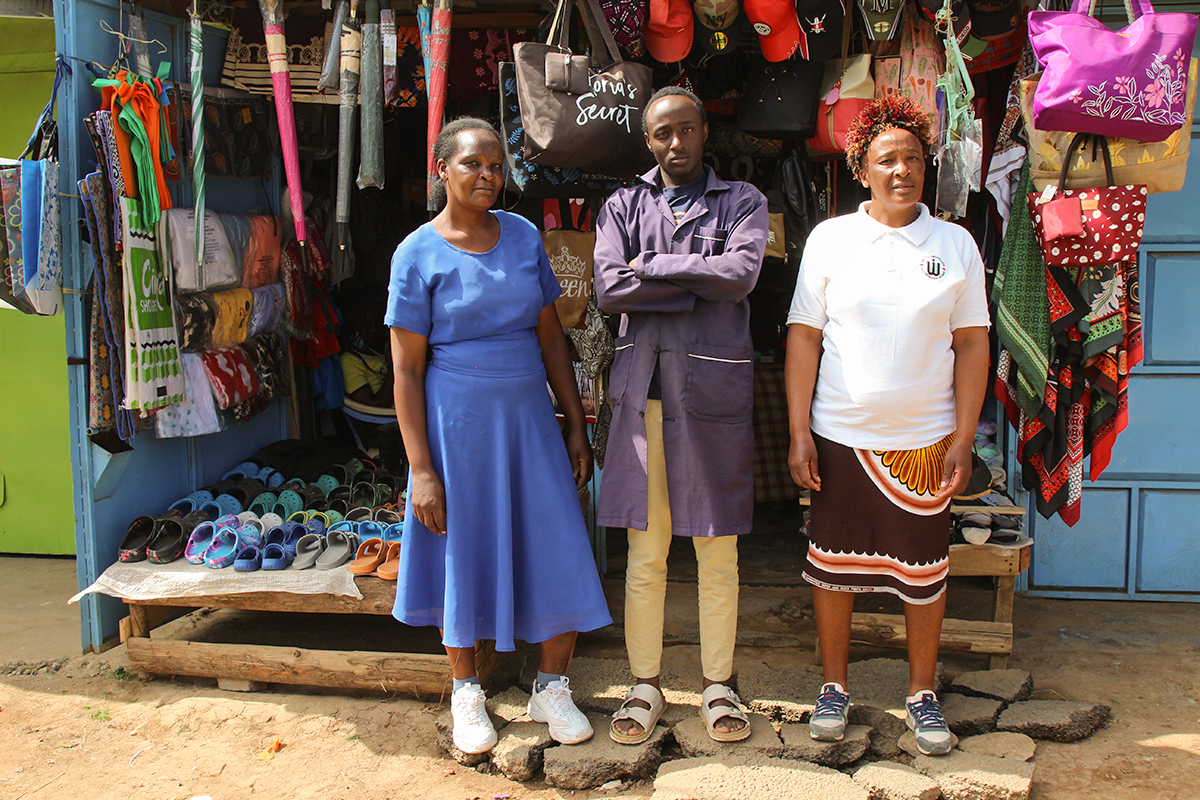 Photo 1: Eunice’s shop is a family business. Her sponsored son Nixion helps with sewing and the management of the shop, along with her sister Tabitha.

Photo 2: From left to right, Tabitha (Eunice’s sister), sponsored youth Nixion and Eunice pose in front of her successful shop. Profits from her shop have allowed Eunice to pay for schooling for her other children who are not sponsored.