In a cinder-block home in El Salvador, 13-year-old Ashley sits at a table where she grips a yellow No. 2 pencil in her left hand.

She puts all her concentration into pushing the tool across a page of her spiral notebook — sometimes placing her chin on the paper to hold it in place — to form letters of the alphabet.

It is Ashley’s foremost dream to one day be able to confidently read and write.

But being born into poverty is only a part of the barrier she faces daily on her journey to realize success.

Born prematurely to a single mother, the middle child of three sisters, Ashley suffers from cerebral palsy, the most common lifelong physical disability in the world. She has been wheelchair-bound since she was old enough to walk and does not have full use of her right hand.

Despite this, Ashley loves calligraphy, visiting the park, Chinese food and making art. Like most children her age, she has a favorite TV show she watches regularly and argues with her siblings over who gets to use the technology. Unlike most children her age, Ashley must have help to move around; even the entrance to her family’s rented home is narrow and accessible only by stairs, making leaving difficult if not impossible.

In Latin America, people with special needs, or disabilities, like Ashley’s, are referred to in the media as “the invisible ones” as they often do not attend school or have access to inclusive services. Ashley’s short history is already riddled with her family’s struggles to have her be seen for the beautiful soul that she is and not just by the physical limitations of her body.

Unless you’ve lived a life like Ashley’s — a life spent on wheels, navigating uneven sidewalks, narrow walkways, and public spaces and educational facilities built without your physical needs in mind — it may be hard to comprehend how poverty exacerbates a disability.

But husband and wife duo Paul Kissel and Carol Mills did understand, and that’s how they came to sponsor Ashley through Unbound more than four years ago. 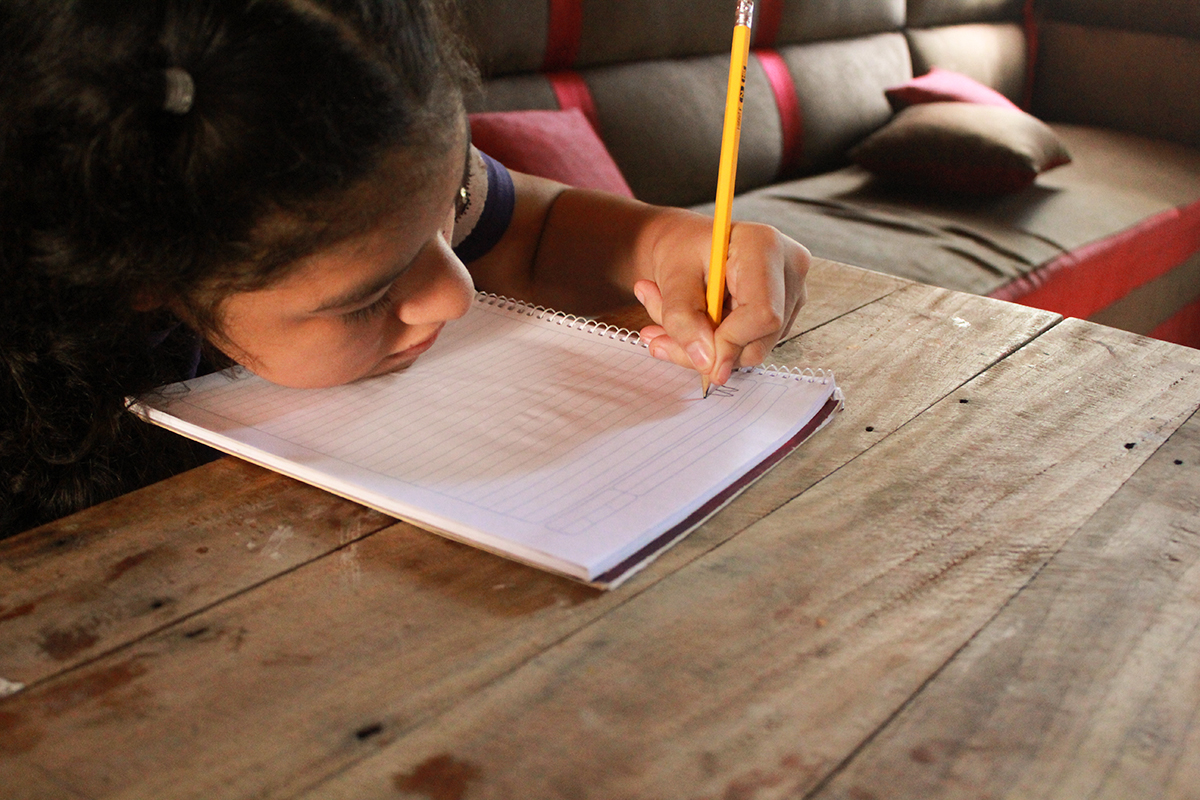 In her family’s home in El Salvador, sponsored child Ashley holds a spiral notebook steady with her chin while she writes. Born with cerebral palsy, Ashley does not have full use of her right hand. The 13-year-old’s greatest dream is to one day be able to read and write fluently.

the invisible children of latin america


According to the World Bank, one out of five Latin American households living in extreme poverty includes a person with a disability.

For decades across Latin America and the Caribbean, children and youth with disabilities were denied the right to enroll in mainstream schools and were instead relegated to special institutions that kept them isolated with fewer skills and less knowledge to lead independent lives, according to a 2021 World Bank report. However, in recent years, steps have been taken to enhance the accessibility of schools and support flexible curricula, with some 22 countries having passed laws that forbid disability-based discrimination in schools.

Despite improvements, 15% of children with disabilities still do not attend school, and those who do attend are more likely to drop out, miss school, and suffer discrimination and violence in the classroom setting. Illiteracy is five times higher among persons with disabilities versus those without. Besides the fact that many children and youth with disabilities are in schools that are inaccessible or unresponsive to their needs, there is also an absence of relevant training for teachers and school leaders.

In El Salvador, Ashley is in the fourth grade. Each day, her mother, Yuri, walks alongside Ashley’s wheelchair as the two make their way to Ashley’s school, located uphill and 20 minutes from their home.

As a single mother, 31-year-old Yuri has sometimes worked two jobs to support her family, leaving her oldest daughter, Alisson, 15, to tend to her younger daughters, Dayana, 10, and Ashley. She wants all her daughters to have the opportunity to be professionals, especially Ashley.

“For a better future for them, what I say now is that sincerely, without an education, it is very difficult to find a stable job, a good job,” said Yuri, who started working at the age of 13. “Ashley’s education is important to me because she is intelligent; what she has is [unfortunate]. … What I tell her is that she can [still] have a job. But she must learn to read and write.”

Because of her physical disability, Ashley still has trouble writing full sentences and often becomes frustrated or discouraged. This year school leaders hesitated to enroll Ashley in school, according to Yuri, because of a lack of trained staff who knew how to teach a child with a disability and because the infrastructure at the school was not accessible to someone with special needs, but Yuri fought the decision.

“I told them that it was [Ashley’s] right, that they could not take it away,” she said. 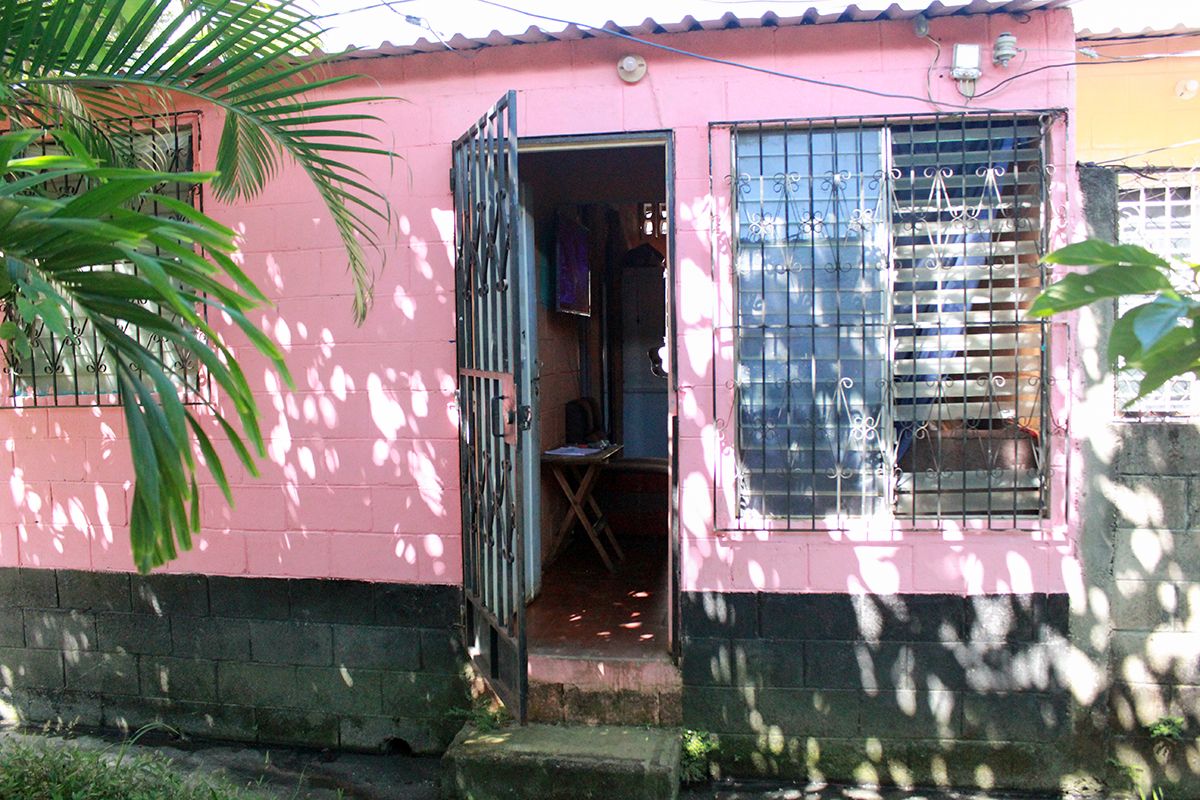 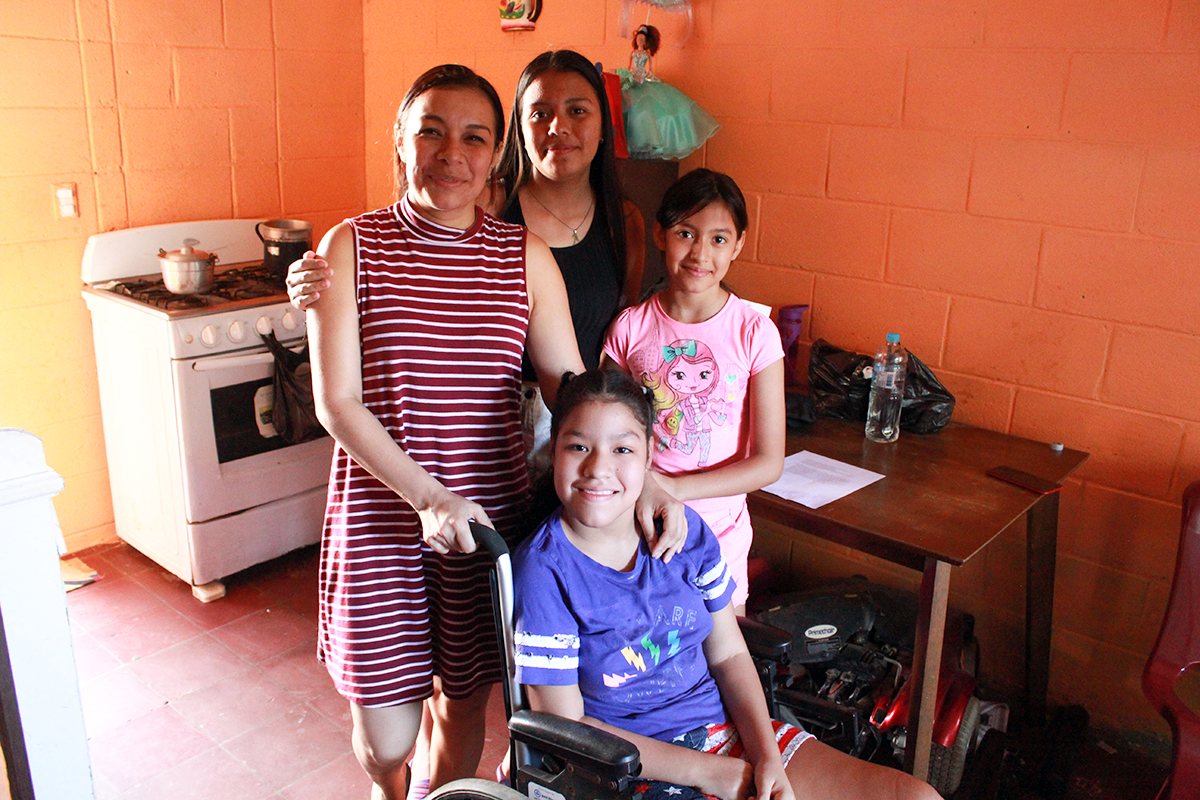 Photo 1: The home in El Salvador where Ashley lives with her mother and two sisters is not wheelchair accessible. In addition, the infrastructure of most public places in the country is not accessible, including schools.

Photo 2: Ashley’s mother, Yuri, motivates her daughters to focus on their education. Education is important to Yuri because she believes it is the key to her daughters’ lives beyond poverty. Pictured left to right: (sitting) Ashley, 13; Yuri, 31; Alisson, 15; and Dayana, 10.

support from 'godparents' who walk beside them


Ashley and her family found the support they so desperately needed in sponsors Paul Kissel and Carol Mills, two individuals who weren’t strangers to the barriers Ashley faces daily as a child with a disability living in poverty.

Kissel and Mills became sponsors through Unbound more than 10 years ago following a visit from an Unbound priest to their home parish of St. John the Baptist Catholic Church in Claybanks, Michigan. Since that time, they have sponsored nine individuals across Latin America and Africa. Currently, they sponsor six children and one elder, five of whom are in El Salvador, including Ashley.

Being a sponsor through Unbound to someone living in poverty has taught Kissel and Mills that, just like Unbound, sponsors “can walk beside [families] in their journey.”

“We have developed relationships with all of our families, and our lives are enriched by each and every one of them,” said Mills, who writes all the couple’s letters to their sponsored friends. “We encourage them to dream. They do not need to be defined by their poverty.”

For Kissel and Mills, their sponsorships are personal and meaningful, and are deeply embedded into the core of who they are as human beings.

In Michigan, Mills is the executive director of a mental health facility that serves children and adults with disabilities. Throughout their time with Unbound, Kissel and Mills have sponsored three children with disabilities, the first of whom was Christopher from El Salvador, who has autism.

When Christopher’s family left the Unbound program in 2018, Mills specifically requested to sponsor another child from El Salvador who had special needs, and this is how they were introduced to Ashley.

Before Christopher left the program, the couple helped his family afford special schooling for him, and they also helped build a private room at his home where he could go to avoid overstimulation. Another child the couple sponsors lives in Honduras and has multiple disabilities, including being blind. When Kissel and Mills found out the child was suffering from eye infections due to sleeping on a mat in the dirt, they helped install cement floors in the family home and get the child a bed.

“The sponsorship costs are minimal compared to the blessings we have received in return,” said Kissel in reference to the families they sponsor. “Our families go through lives with joy, happiness and acceptance. We are thankful for the life lessons that they teach us.” 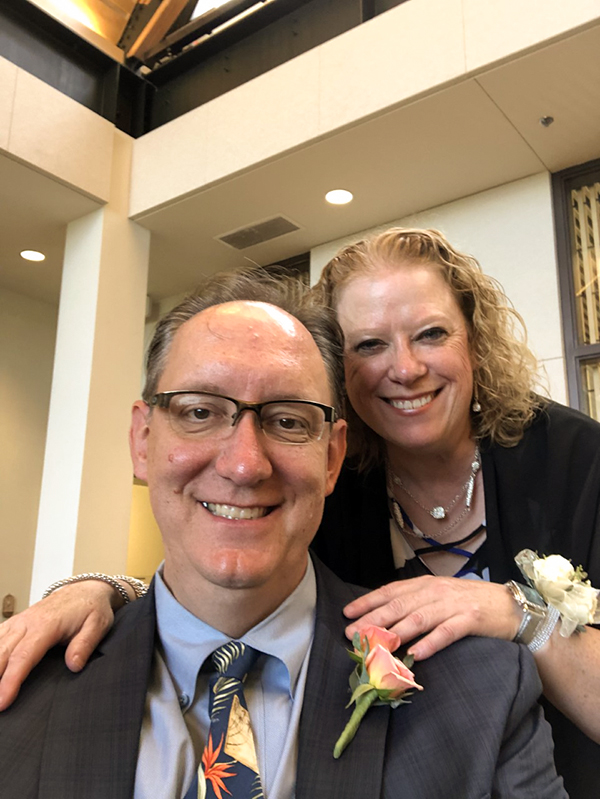 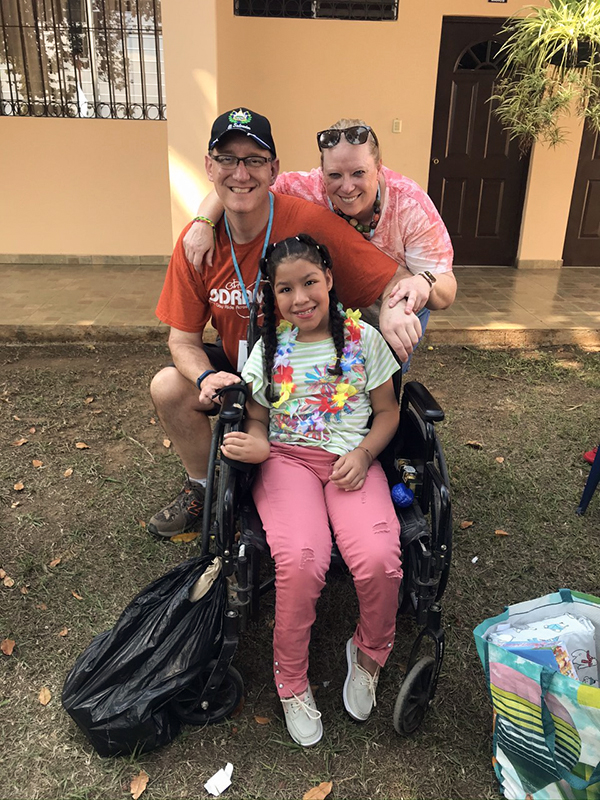 Photo 1: Paul Kissel and Carol Mills of Montague, Michigan, began sponsoring Ashley in 2018, making her the third child with special needs that they had sponsored.

Photo 2: Kissel and Mills have met Ashley and her family twice, once in 2019 and then again in early 2020. The couple frequently return to El Salvador to volunteer to build houses for families in poverty, and they meet with their sponsored friends during these trips. 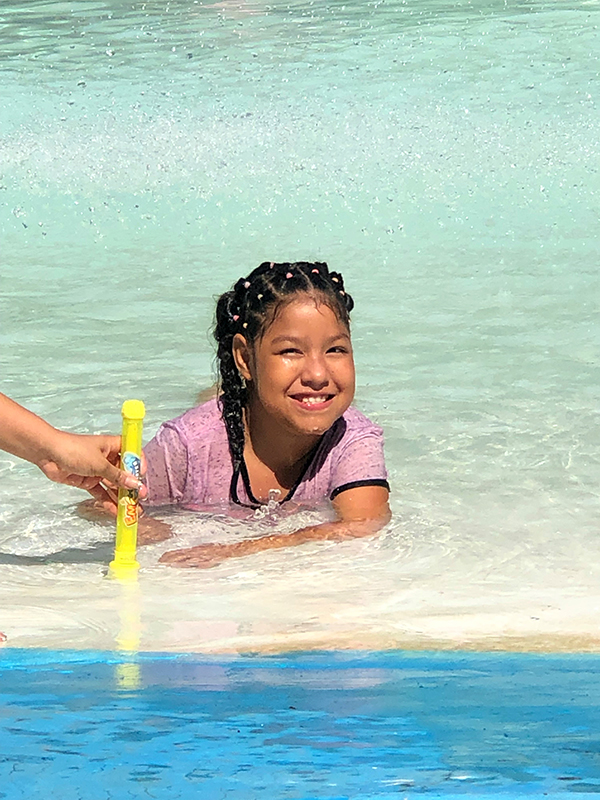 
Joy was the word that came to Mills’ mind the first time she saw Ashley and her mother.

But not just the joy that Mills felt from meeting her sponsored friends face-to-face. It was the joy that she witnessed Ashley and Yuri share between them.

“They are overcoming many obstacles in their lives, and they do this with incredible joy and happiness,” Mills said. “Others in their situation would not have their optimism and hope. We have deep respect for Yuri and how great of a mom she is for Ashley and her sisters.”

Throughout their time sponsoring Ashley, the couple has gifted her with books and a backpack designed for a wheelchair. They have also helped the family with the purchase of a bed for Ashley so that she might be more comfortable as she sleeps, and a coloring set that has fueled her love of art.

Though Ashley’s dream of one day being able to read and write has lately seemed like it is out of reach because of the family’s struggles with the educational system, Yuri says they know they always have the support of their sponsors. “They are always looking for ways to help us with whatever [Ashley] needs,” Yuri said. “We feel supported.”

Kissel and Mills haven’t been able to visit with Ashley since their last trip abroad in early 2020, but they are hopeful to see her in 2023, and Ashley is ready. She remembers Paul Kissel being tall, and she’s excited to get to give her godparents a hug.

Kissel and Mills’ love of sponsorship has motivated other members of their family to sponsor as well, and they have often traveled together to meet their sponsored friends. To new potential sponsors, Mills says to “go all in.”

“It’s exciting when families get a letter from their sponsor, but many never have,” Mills said. “They would love to learn more about their sponsors’ lives. You can develop friendships and be an important part of their lives.” 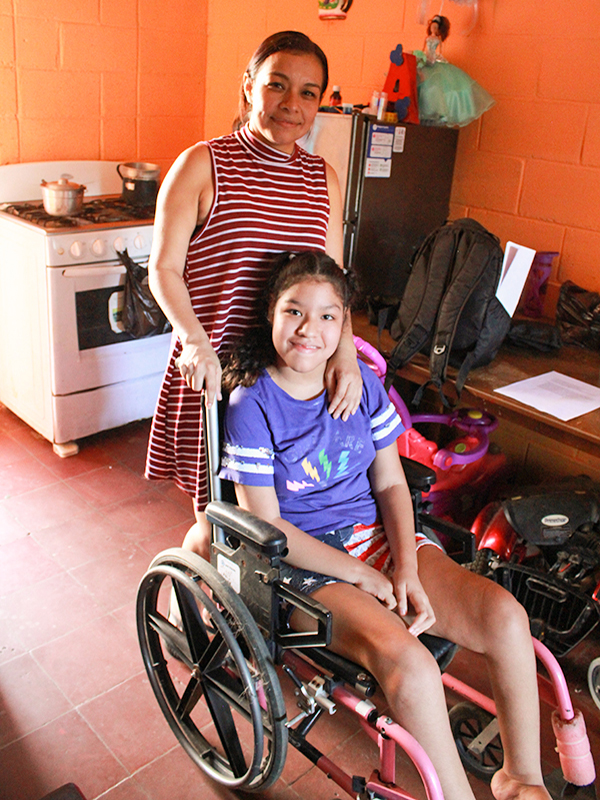 Yuri, mother of sponsored child Ashley, dreams for all her children to one day become professionals. Currently, she sells products at a local supermarket. For herself, she dreams of also returning to school to finish her education and get a degree in languages.

We have developed relationships with all our [sponsored] families, and our lives are enriched by each and every one of them. We encourage them to dream. They do not need to be defined by their poverty.