In Pope Francis’ message for the sixth World Day of the Poor this year, he speaks of a paradox that clashes with “our human way of thinking.”

The paradox is that there exists a form of poverty that can make us rich and set us free.

True wealth, the pope reflects, is a reciprocal love that leads us to bear one another’s burdens in such a way that no individual is left behind or excluded.

“The sense of weakness and limitation that we have experienced in these recent years [due to the pandemic], and now the tragedy of the war [in Ukraine] with its global repercussions, must teach us one crucial thing,” the pope said. “We are not in this world merely to survive, but to live a dignified and happy life.”

World Day of the Poor launched in 2017 as Pope Francis' initiative to urge the Church and the faithful to "go out" to encounter poverty in the various ways that it “manifests itself in the modern world,” and to reach out to those most in need. For the last six years, the pope has chosen a guiding theme that helps drive the point of the day. This year’s theme centers on solidarity, unity and responsibility.

The fight to 'redeem dignity from injustice' continues

Yet Jesus’s words are clear: if we want life to triumph over death, and dignity to be redeemed from injustice, we need to follow Christ’s path of poverty, sharing our lives out of love, breaking the bread of our daily existence with our brothers and sisters, beginning with the least of them, those who lack the very essentials of life. This is the way to create equality, to free the poor from their misery and the rich from their vanity, and both from despair.

Before the COVID-19 pandemic, the world had a global goal to reduce extreme poverty to just 3% of the global population by 2030. Now, the World Bank reports that there are 70-plus million more people in extreme poverty than before 2020, and by 2030 nearly 600 million people will struggle on less than $2.15 a day. The Bank’s latest Poverty and Shared Prosperity Report released in October found that COVID-19 dealt the biggest setback to global poverty-reduction efforts since 1990, and the war in Ukraine threatens to make matters worse.

The poorest people bore the steepest costs of the pandemic, losing twice as much of their income as the wealthiest 20% and, as a result, global inequality rose for the first time in decades.

“Over the next decade, investing in better health and education will be crucial for developing economies, given the severe learning losses and health-related setbacks they suffered during the pandemic,” said Indermit Gill, the World Bank’s chief economist and senior vice president for development economics, in the report.

arriving at what truly matters in life

That, in effect, is precisely what solidarity is: sharing the little we have with those who have nothing, so that no one will go without. The sense of community and of communion as a style of life increases and a sense of solidarity matures.

Though eradicating extreme poverty for all people by 2030 is still a pivotal goal of the United Nations' 2030 Agenda for Sustainable Development, solving this global issue will remain a complicated one.

Pope Francis encourages us, however, to begin with introspection and then action. Encountering the poor, he said, enables us to put aside many of our anxieties and empty fears, and to arrive at what truly matters in life — true and selfless love.

In mid-2022, it was deep introspection that led several of Unbound’s regional reporters to ponder a question that they ultimately decided to ask sponsored families while gathering their stories of living in poverty and survival.

What does poverty mean to you?

Many of the responses revealed something unexpected: The poor themselves already know better than anyone that there exists a poverty that can set a person free. Therein lies evidence of the truth to Pope Francis’ paradoxical statement.

While the pope's message this year asks us to reflect upon the many forms of poverty that exist among us all, the one takeaway for World Day of the Poor is that it is people in poverty who stand to teach us much more about this life than what we could ever hope to discern or experience on our own. Here is a look at just four of the Unbound sponsored families who shared with us what poverty means to them.

MARIA, GUATEMALA — UNITY IN POVERTY
During the rainy season, the house that sponsored child Ricardo’s family lived in used to leak, turning the dirt floor into a pool of water. He and his other five siblings slept in one room, and there were days the family did not have food to eat. Ricardo’s mother, María, worked when she could, washing other people’s clothes, while his father, Antonio, took whatever jobs in construction or agriculture he could find.

Life improved once Ricardo became sponsored. The family used some of the sponsorship funds to purchase chickens they now raise and sell for income. Little by little, they made improvements to their home so it no longer leaks, and through Unbound’s support groups, María has learned important skills in money management.

Despite the family’s often bleak living situation, María says they keep moving forward because they are “people of vision.”

This is what poverty means to María:

“There is an advantage and there is a disadvantage to poverty. Perhaps the advantage is having unity with others. When we eat, even if it's a plate of herbs, we all get together at our humble table, all together dad, mom and children, and the little basket of tortillas is enough for everyone. This situation gives us joy because during our talk, a story comes out, and there is communication between us. Poverty does not disintegrate us. If one sees it from the positive side, poverty means unity, but there are very few of us who manage to understand this.” 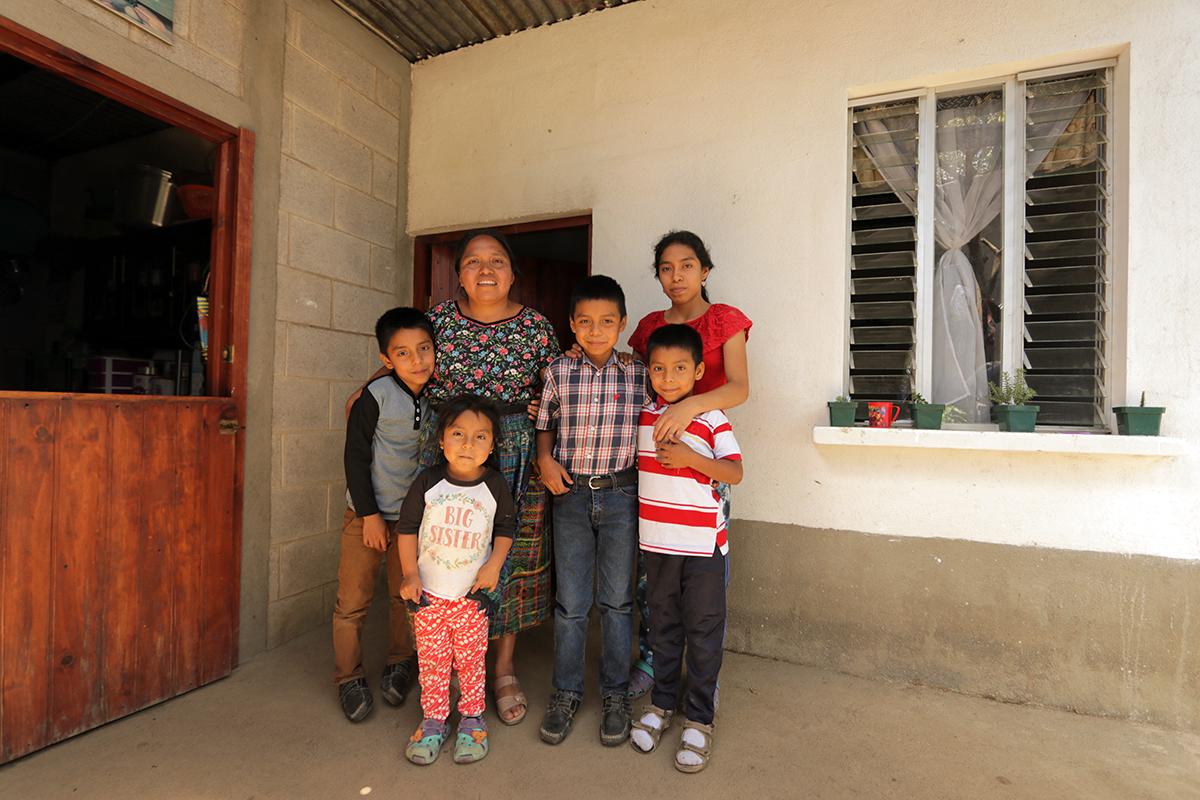 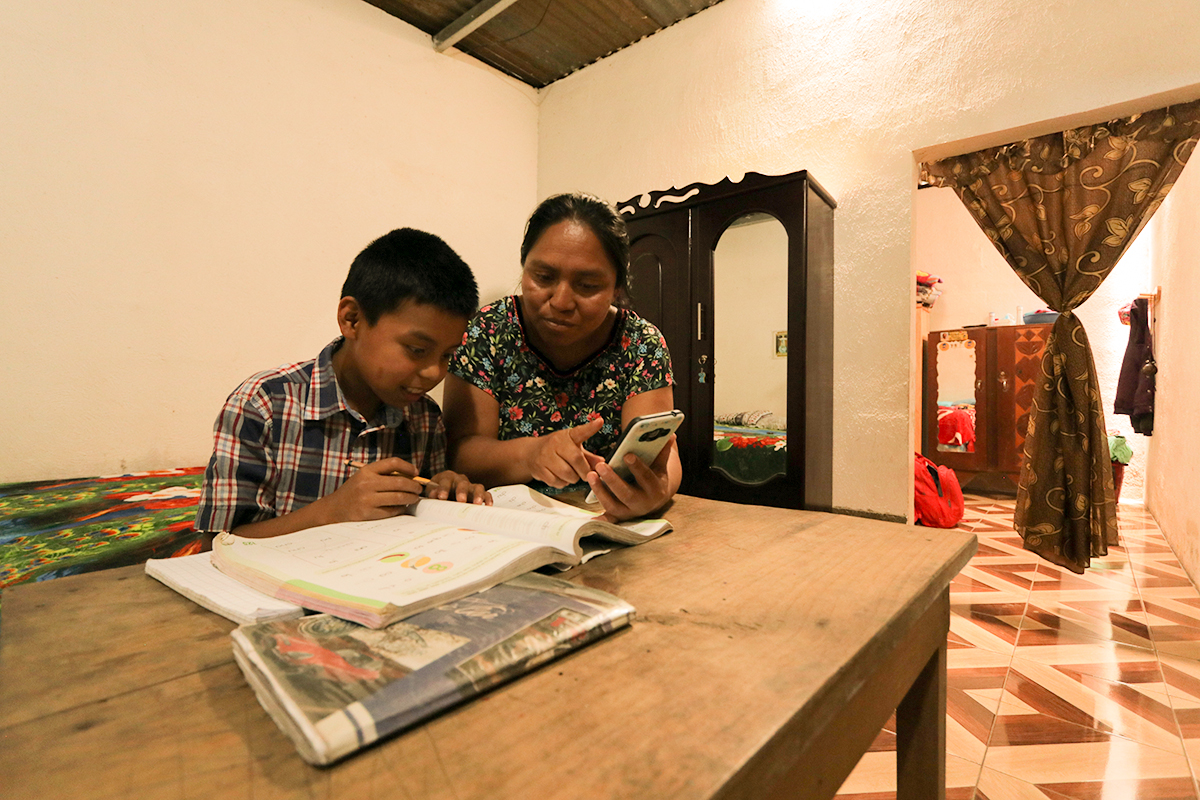 Photo 1: María, mother of sponsored child Ricardo, stands with her children in front of their improved home in Guatemala. With assistance from Unbound, the family was able to fix their leaky roof and create more bedrooms for their family of eight. (Pictured left to right) Oscar, 7; María; Nataly, 4; Ricardo, 10; Clara, 16; and Dimas, 6.

Photo 2: María helps 10-year-old sponsored child Ricardo with his virtual schoolwork. María calls herself “everyone’s teacher,” as she makes sure her children always get their homework done. She also taught her husband, Antonio, how to read, write and do simple mathematic equations.

DILCIA, DOMINICAN REPUBLIC — LOVE IN POVERTY
Dilcia, grandmother and guardian of several sponsored members in the Dominican Republic, cares for her ailing husband with the income she earns from preparing and delivering snacks for children at a nearby school. She calls her childhood “in the middle of poverty” sad but happy, growing up with a single mother and leaving thoughts of an education behind to help raise her younger siblings. She dreamed then of becoming an entrepreneur, but said she learned to “accept what God gave her.”

Now at 60 years old, with assistance from Unbound’s Small Business Accelerator, Dilcia has been able to come close to realizing her dream, expanding her natural seasoning business that she began out of her home. She hopes to one day make improvements to the bathroom in her home so that it no longer floods when it rains.

This is what poverty means to Dilcia:

“Poverty is better if you know how to live it with love, but if you want to see it in a different way it gets harder. ... With love, you are able to keep moving forward in the middle of poverty, and that’s what I had to do. You shouldn’t think about being someone that you aren’t; [poverty] is to accept the reality of who you are and not show yourself as someone that you aren’t.” 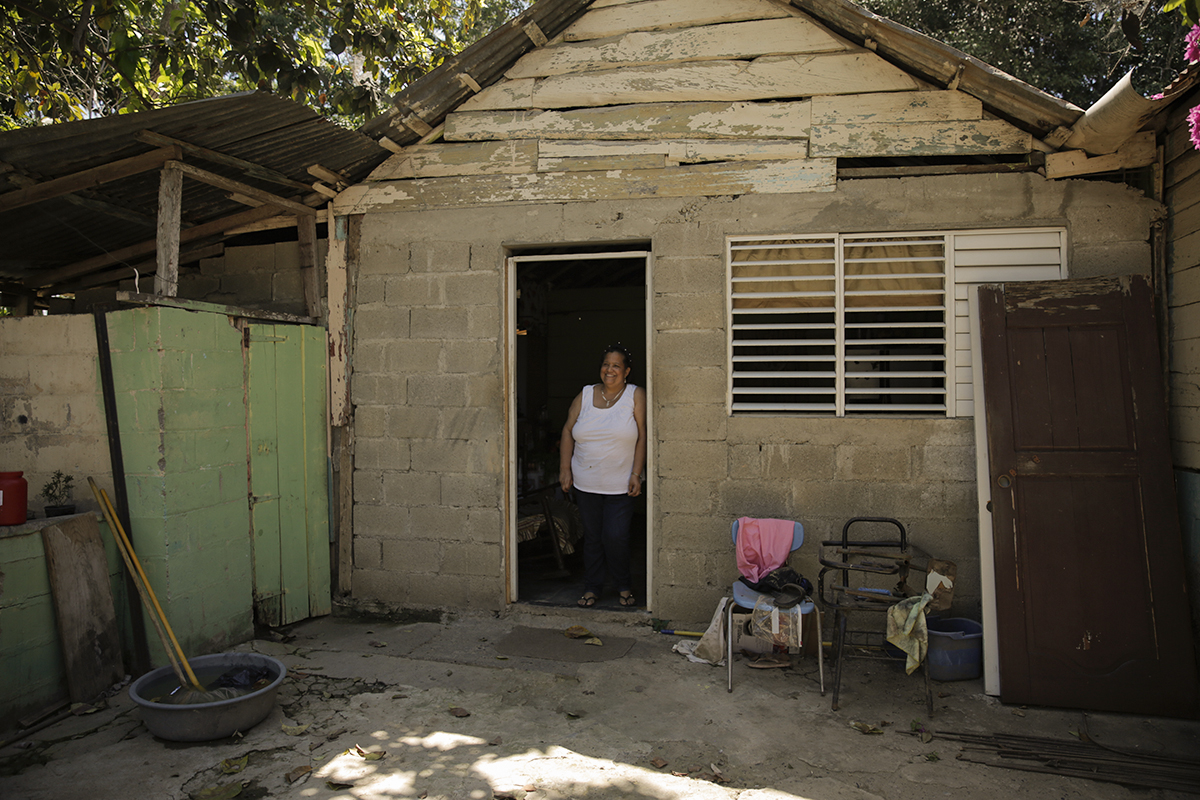 Dilcia stands in the doorway of her home in the Dominican Republic. She raised a multitude of children in her home, most of whom she adopted as her own from other family members who could no longer care for them.

SANTA, DOMINICAN REPUBLIC — HUMILITY IN POVERTY
In Barrio Nuevo in the Dominican Republic, Santa, mother of sponsored member Gissell, calls herself the “community leader.” Having lived in Barrio Nuevo her whole life, she frequently finds herself fighting to bring change to her community that is riddled with crime. A hairdresser, she helps provide care for 30-year-old Gissell, who was born with a disability, and her children. Santa tells her grandchildren that the only thing she will leave them with when she is gone is what they study because knowledge is true wealth.

This is what poverty means to Santa: 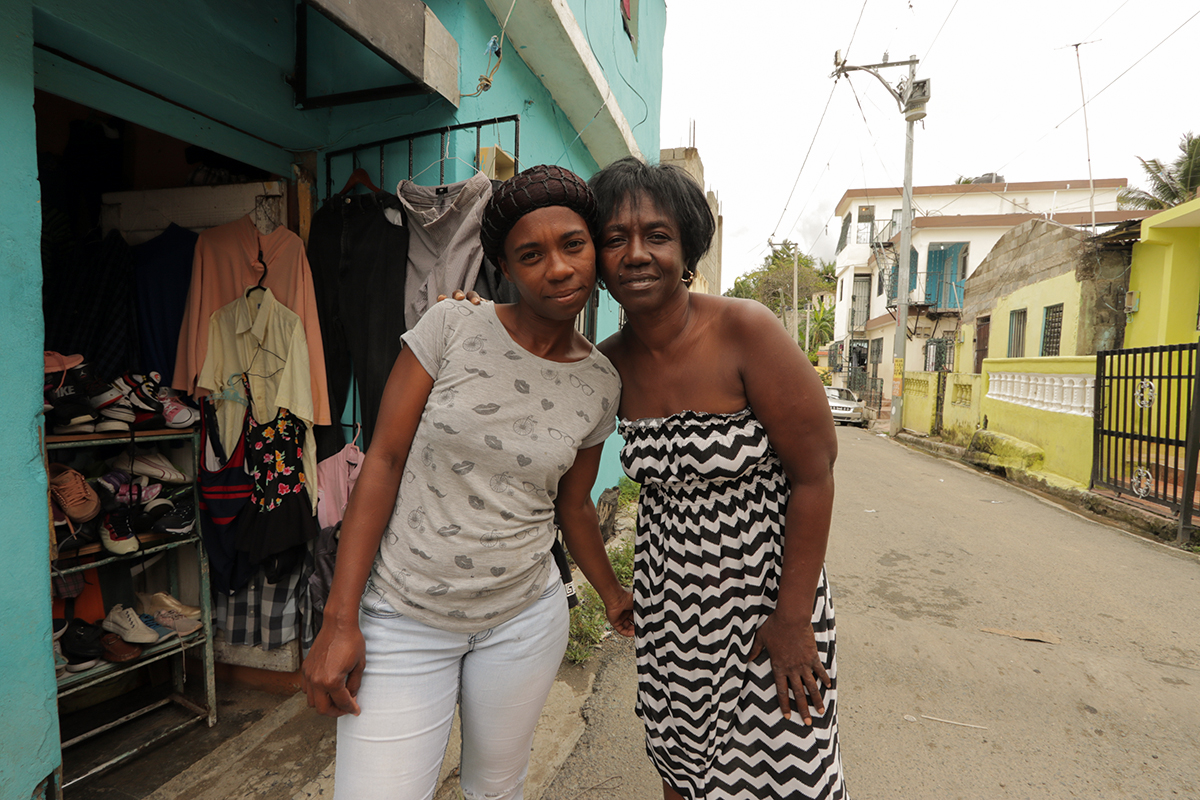 Sponsored member Gissell (left) and her mother, Santa, pose for a photo in their community of Barrio Nuevo, Dominican Republic. With assistance from Unbound, Gissell, who has a disability, was able to expand their salon business by setting up a workspace inside the family's home, which now makes it easier for her to not have to leave her home to generate an income.

PASCUALA, GUATEMALA — HAPPINESS IN POVERTY
When Pascuala was a baby her mother passed away, and she was raised by her grandmother. After her grandmother died, Pascuala bounced from neighbor to neighbor, living and working as she went, sometimes in inns, never having a true home, until she was 35 years old. She wore blouses made from cotton blankets and never owned anything of her own. At 14, she gave birth to her daughter, Dolores.

She eventually befriended and came to live for the next 55 years of her life with Clara, who was also sponsored through Unbound, until Clara passed two years ago. Now, at 92 years old, Pascuala still calls her beloved friend’s home her one true sanctuary. If not for sponsorship through Unbound for the last 23 years, she believes she would still be trying to work each day for her next meal.

This is what poverty means to Pascuala:

“[But} I am happy because God is with me. I have told God that I was born poor, but that I am still alive, even if I walk with a walking stick and have some other health problems. But God is with me. I have thanked him for my life because I could easily have died in the inns where I stayed. But even in those inns, I was happy, too.” 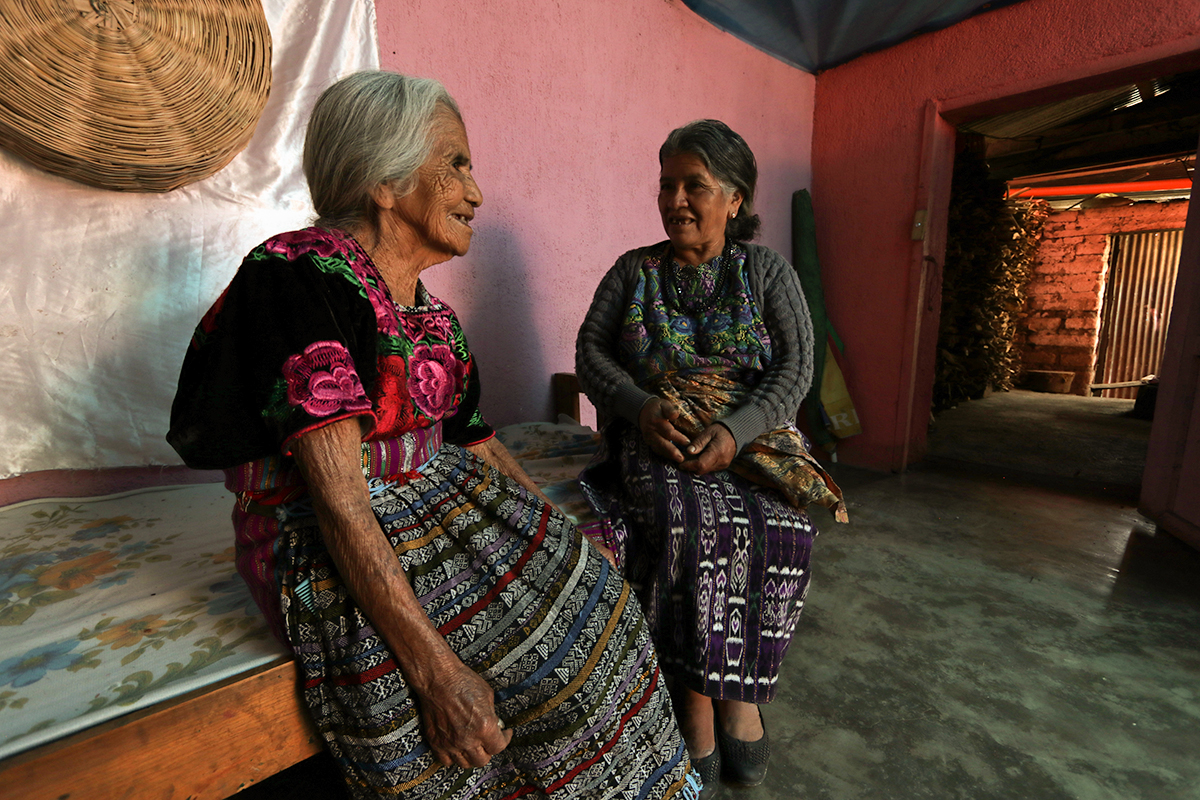 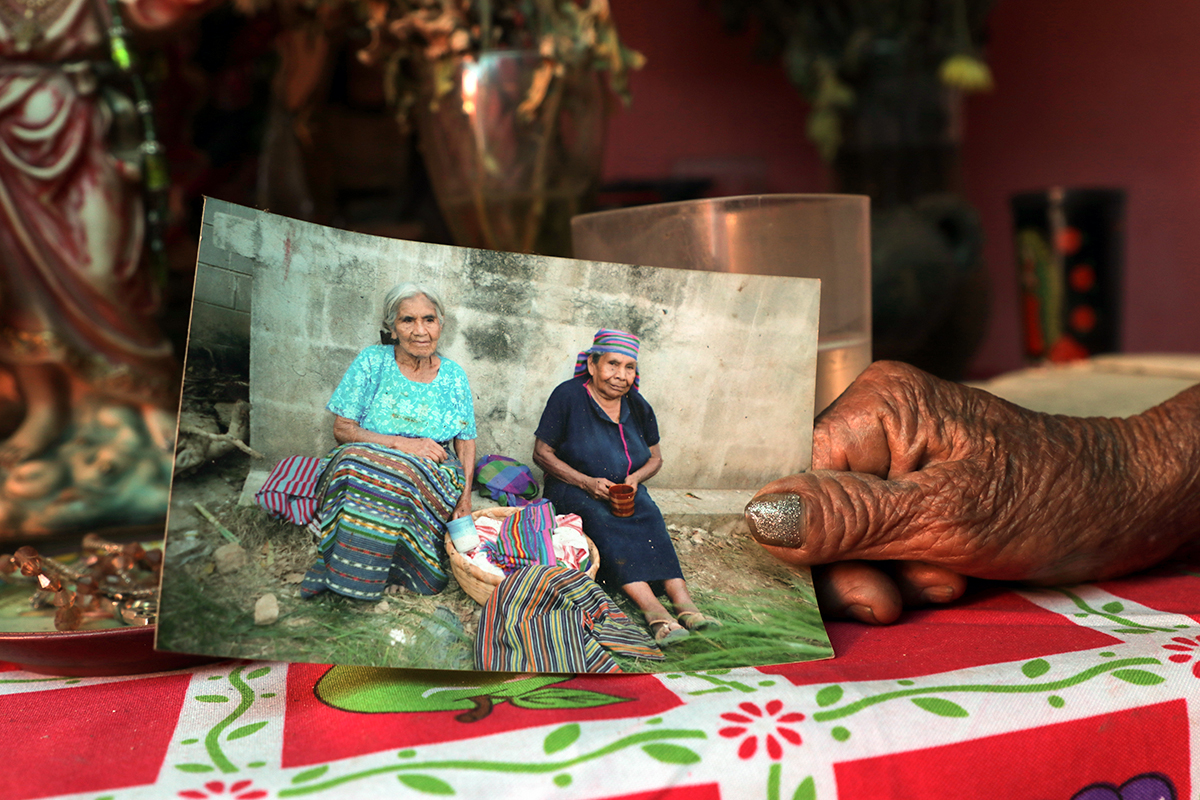 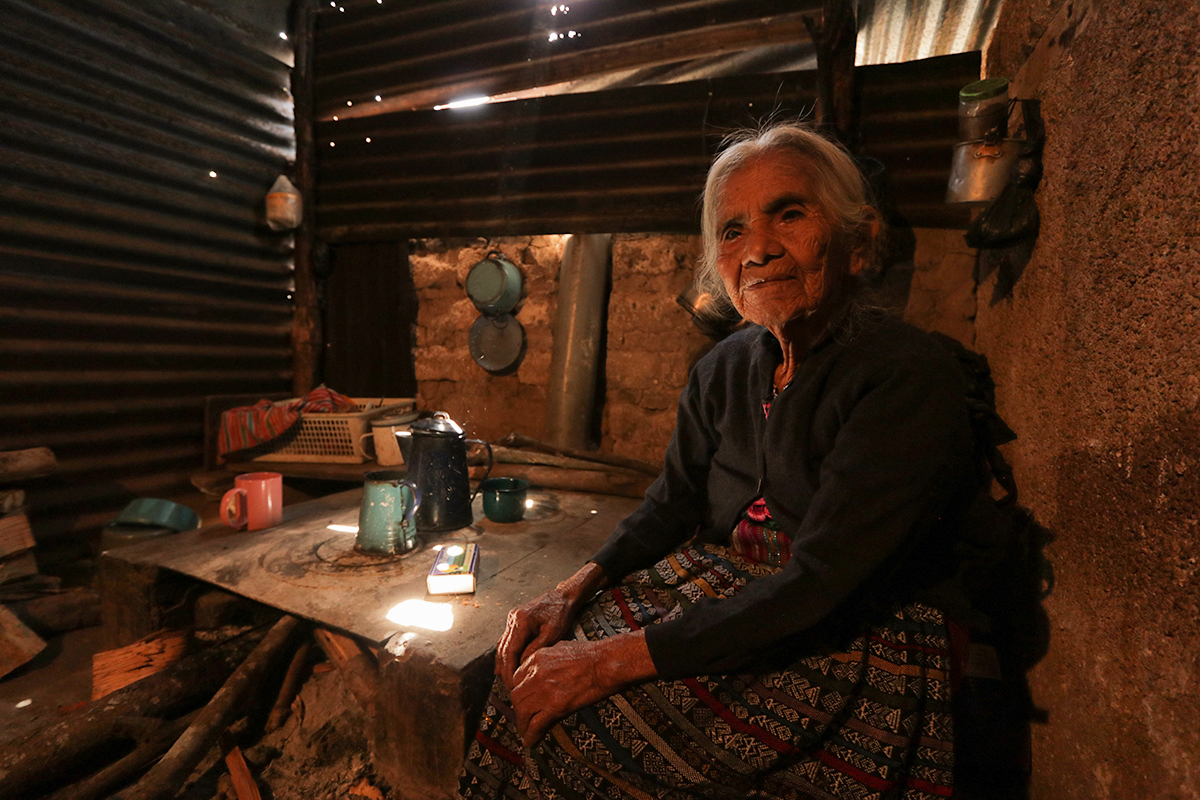 Photo 1: Sponsored elder Pascuala (left) enjoys a visit from her daughter, Dolores, at the home in Guatemala that she shared with her dear friend Clara, who passed in 2020.

Photo 2: Pascuala shares a photo of her and her best friend, Clara, who invited Pascuala into her home when Pascuala was homeless. They shared Clara’s home for 55 years before Clara passed.

Photo 3: At 92 years old, Pascuala still insists on doing her own house chores and cooking meals for her visitors. After Clara passed, Pascuala’s daughter invited her to live with her family, but Pascuala chose to continue living in Clara’s home. “I feel more comfortable in this house where my friend welcomed me one day,” she said.

We are not in this world merely to survive, but to live a dignified and happy life. … There is a poverty that humiliates and kills, and another poverty, Christ’s own poverty, that sets us free and brings us peace.

— Pope Francis, Bishop of Rome and Leader of the Catholic Church