The Power of Change

The Kariobangi South Health Center in the Mathare neighborhood of Nairobi is the only government medical facility in the area offering medical care to the sick and basic medical services to the community.

Prior to 2021, overcrowding at the facility often meant that those seeking medical attention needed to wait to be seen outside on the veranda, an uncovered area, exposed to the elements. The hospital administration knew about the issue but had not been able to acquire funding to construct an adequate waiting area for patient overflow.

Then one day, a single mother and day laborer, Cecilia, visited the hospital’s overflow waiting area. In the rain, she observed pregnant women standing on the pavement, trying to shield themselves from the elements. There were individuals sick with tuberculosis or COVID-19 with no shelter and nowhere to sit. And when there was no rain, the sun brought intense heat down on everyone.

As chairlady of the Amkeni SHG mothers group in Unbound’s Nairobi Mathare Valley program and the mother of a former sponsored youth, Cecilia recognized the opportunity for an Agents of Change (AC) project that would have a direct and positive impact on her community — building the health center a covered waiting bay with seating.

“I felt the project was worth it; it was going to help them [the patients],” Cecilia said. 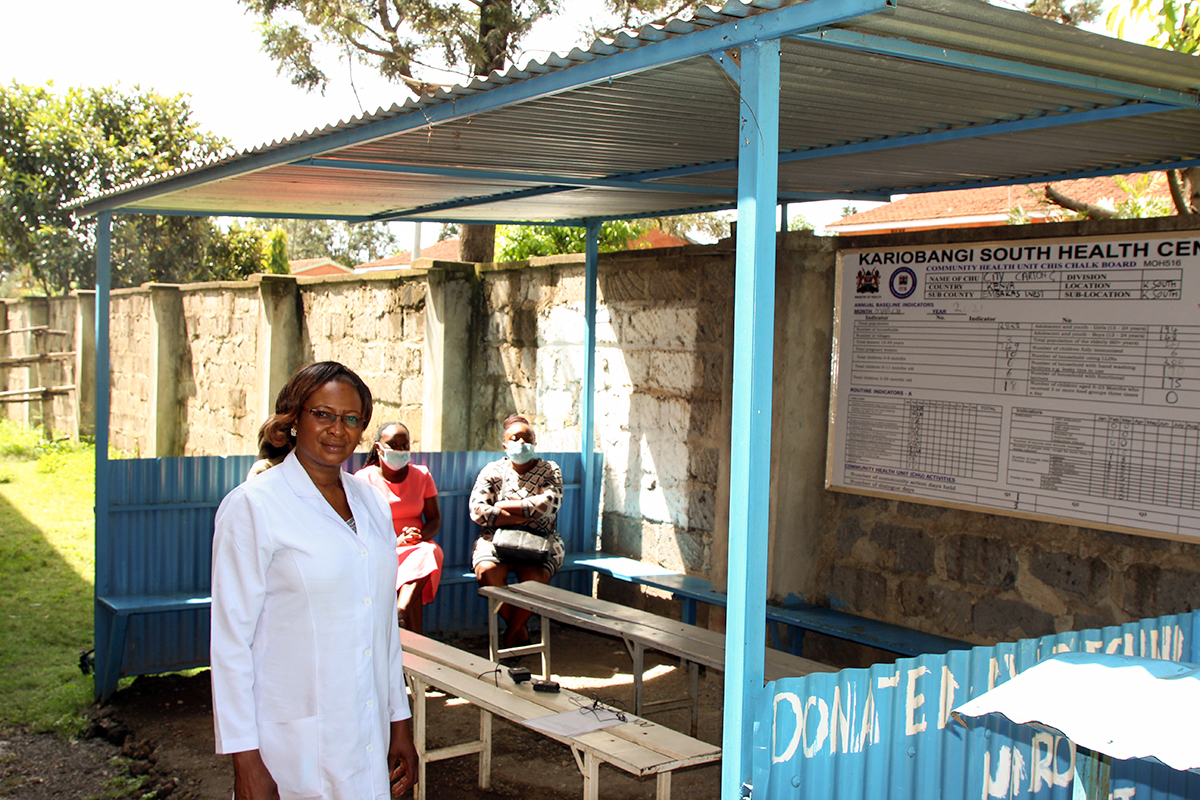 At Nairobi’s Kariobangi South Health Center, a mothers group led by Cecilia, the mother of a former sponsored youth, completed an Agents of Change initiative to install a covered waiting bay at the facility. The covered bay helps keep patients and visitors safe from the weather while they wait, and has also become a necessary meeting space for facility staff to assess the medical needs of patients. Pictured in front of the new waiting bay is the health center’s deputy, Martha Ayiro, who worked in conjunction with the mothers group to get construction of the waiting bay approved at the facility.

empowered mothers as a force for positive change


Unbound’s program model is based on the conviction that empowered mothers are a force for positive change, in their own lives in the lives of their families and communities. Survey results have indicated over the years that the program contributes to empowering mothers and guardians of sponsored children — like Cecilia — through the expansion of their choices, their control over their own decisions and their power to effect positive change.

In October, an Unbound story “The Roots of Change” detailed a more recent evaluation conducted to find out the impact of the organization’s newest platform, Agents of Change, on sponsored families and their communities. In short, the study found that the platform empowers communities in poverty to see themselves as lasting changemakers.

But there was more to the story.

Though whole communities in poverty are reaping the benefits of initiatives completed via Agents of Change, the fuller picture reveals women and mothers within Unbound’s parent support groups are largely the sole drivers of that change. But it’s not just their communities that are benefiting from the Agents of Change platform.

The evaluation in 2020 revealed that, after taking part in an AC project, participants’ belief that they could create change in their communities increased from 18% to 39%.

All the 2020 evaluation participants were women. It’s not unusual, however, since the vast majority of AC initiatives are proposed and selected by the mothers of Unbound sponsored children from within the parent or mother support groups.

Director of Unbound’s international programs, Dan Pearson, said that the AC platform was created with the hope that it would provide a space where women would eventually begin to view themselves as people who are capable of making a positive impact in their communities. A surprising outcome of the 2020 evaluation, however, was how fast that change can occur.

“The evaluation results showed that women changed their self-perception and saw themselves as changemakers after participating in just one AC initiative,” Pearson said.

During his travels with Unbound, Pearson has seen the results of many AC initiatives in the organization’s programs around the globe. Recently, he visited a rural health clinic in Kenya where an Unbound mothers group had used an AC grant to install solar electricity in the maternity ward. Before then, women in that community who gave birth at the clinic after dark did so by the light of a cell phone flashlight.

“These are real changes in the quality of life of thousands of people,” said Pearson about this AC initiative and others he has observed. “They [the mothers groups] are the people who are best equipped to make these decisions. They prove that fact every time they have a chance.”

The deepest impact of Agents of Change, Pearson said, isn’t just the physical improvements AC can bring to communities in need, but it’s the change that happens within each of the women driving the initiatives. 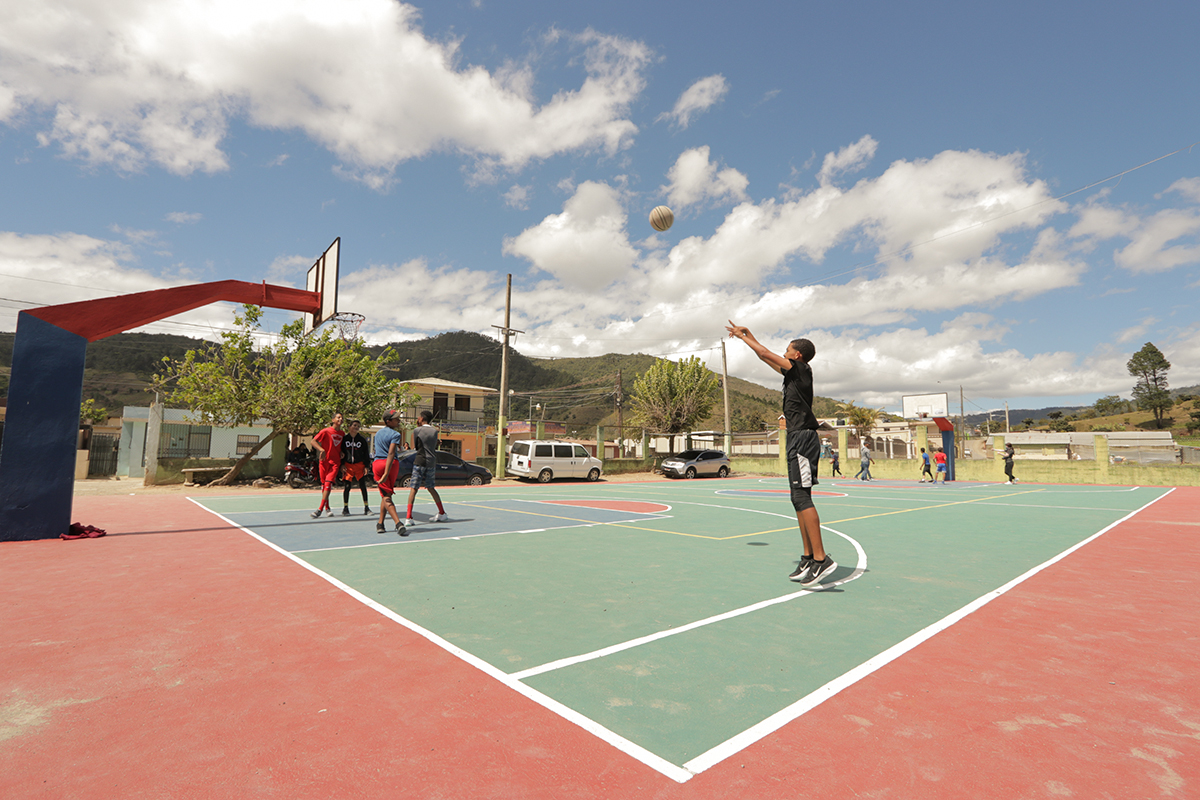 Photo 1: A group of mothers in Unbound’s Santo Domingo program in the Dominican Republic envisioned a place of recreation in their community for the children and youth, to give them something active to do after school and keep them out of trouble. The group used an AC grant to renovate a deteriorating basketball court, now used by the entire community. Pictured at the new court are mothers group members and community members who worked on the project. From left are Ana, mother of sponsored child Angel; Arlin; Miguelina; and Alexandra.

Photo 2: Thanks to an AC grant and support from the community, a mothers group in Santo Domingo was able to renovate a basketball court for their children. They painted the court, cleaned the stands and installed new hoops on the basketball goals.


Agents of Change is part of the reason why 90% of mothers with sponsored children in Unbound believe they have the power to change the lives of their families.

Pearson refers to it as a “learning by doing” approach where women come to view themselves as effective community leaders by having the opportunity to lead a group that enables a visible change in a community. The “learning by doing” approach also creates tangible and visible examples of female leadership to the local community, something especially important for children to see as it can be formative to their understanding of the roles of women in society.

Indhu recalls a memorable AC initiative that involved the renovation of a 60-year-old well. In the Dindigul district of Tamil Nadu, people across 10 villages were dependent on the well for their drinking water, but the old well had become silted, and the water was contaminated due to lack of maintenance. The villagers had to walk long distances to collect their family’s drinking water.

Two Unbound mothers groups stepped up to address the needs of their community. Pooling their AC grant funds, they were able to arrange for the well to be desilted and covered with a protective lid, and the well now supplies safe drinking water to the villagers.

Mothers groups are responsible for AC initiatives from start to finish, identifying the needs, writing the proposals and implementing the approved initiatives. They even go so far as to find and bid on materials needed for various initiatives, engage with other community leaders, and fundraise if their initiative ends up being more costly than what their AC grant could cover. But they are also part of the committees that select which AC initiatives receive funding, a unique aspect of the AC platform.

“Almost everyone who is involved in the AC gains confidence, high self-esteem and social recognition,” Indhu said. 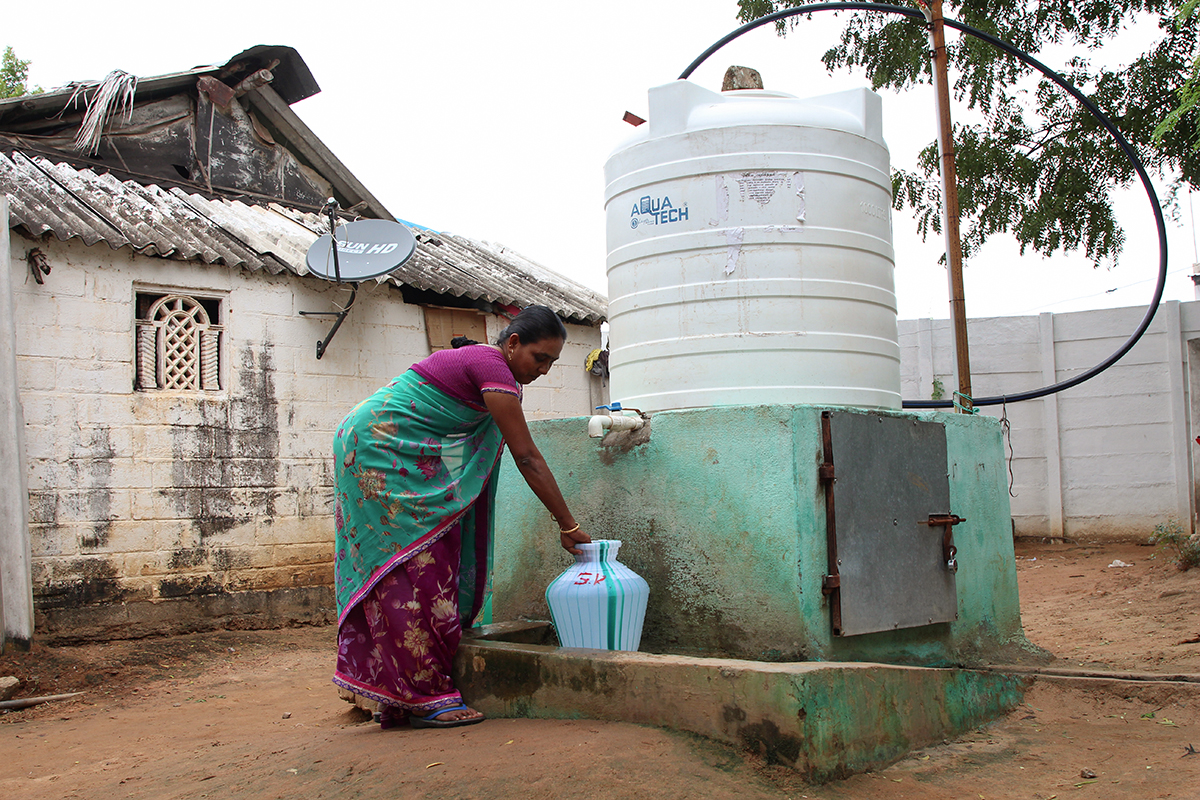 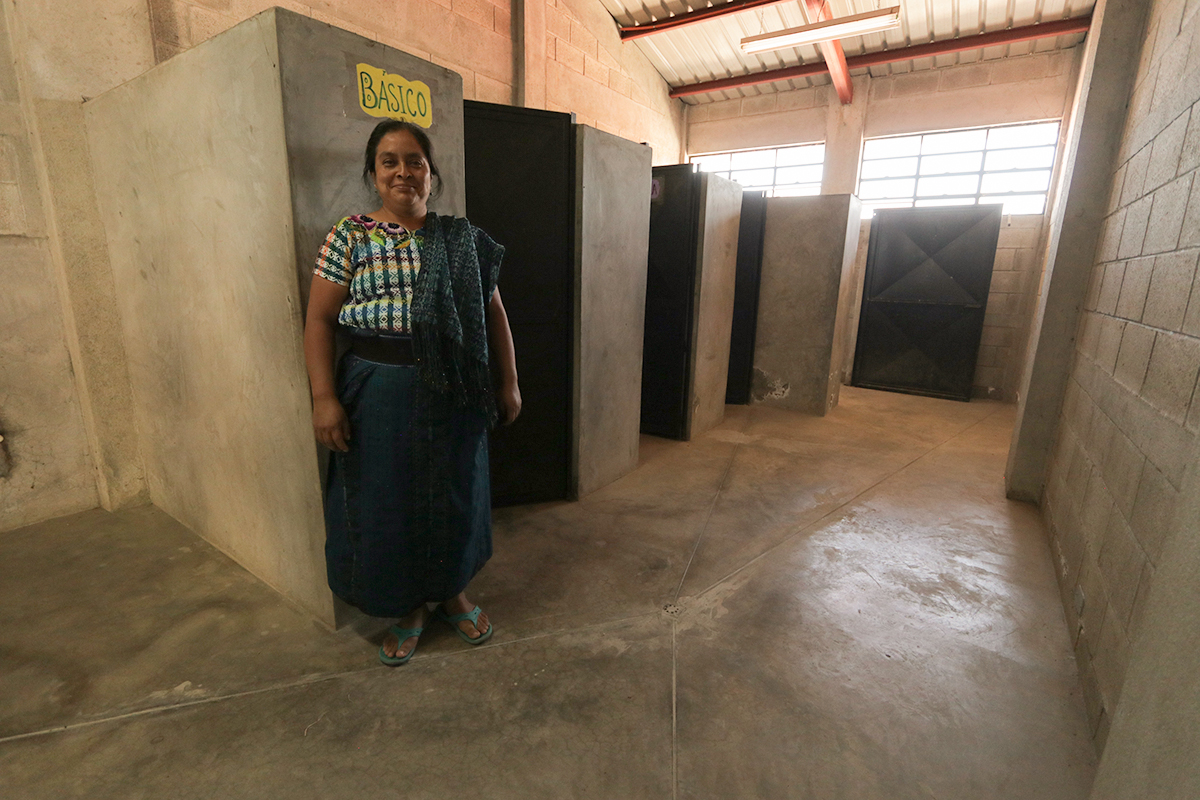 Photo 1: In a refugee camp in Trichy, India, Kowsalya, mother of sponsored child Kabilan, fills her pot with clean water from the community’s water storage tank. The tank was installed by Kowsalya’s mothers group through an AC grant. Before, water was scarce in the community of almost 300 families and only available for an hour each day. With the water tank, now all families have equal access to water anytime they need it.

Photo 2: Elena, mother of sponsored youth Diego, was appointed committee president of her mothers group’s Agents of Change committee in Santiago Atitlán, Guatemala, where they took on an initiative to improve the bathrooms at a local school. Elena learned how to obtain price quotes for materials, work with school leaders and oversee construction. With the confidence she gained from her mothers group, Elena has begun studying to be a nurse, a childhood dream of hers.

a chance to see life in a new light


The progression of mothers and women through the Agents of Change process helps them “see life in a new light,” according to Indhu. She believes AC is a step that will lead women to the next stage of their lives, and indications are that she’s not wrong.

In Guatemala, Juana started working in embroidery and beading when she was 12 years old. Now at 42, she is the mother of six children, two of whom are sponsored through Unbound.

Before sponsorship, the family’s home was slowly deteriorating, and they often struggled to afford food. Juana suffered from anxiety, but over time, she began attending her Unbound mothers group where she learned leadership strategies and how to save to make improvements to her home.

Admittedly, she didn’t know how to lead others, but when Juana was appointed coordinator for their group’s AC initiative, she stepped up. The group chose to replace the failing main gate at their children’s school to keep the children safe as they studied, and they worked with the administration to see the initiative through.

“There were people who did not believe in our management, however, that would not prevent us from seeing the improvement take place,” Juana said. “Some mothers did not believe in their potential. At the end of the whole process, we feel happy and proud to have managed this project. For me, it was a pleasant experience because I had never had a responsibility as big as this.”

Unbound and involvement in AC has changed the way Juana sees difficulties in her life. For example, learning budget and project management through AC has given her the confidence to help guide her husband to take advantage of starting a potential farming business. But she also sees the bigger picture.

“My greatest experience is being able to motivate my own family,” she said. “I can guide my daughters so that in the future they can be entrepreneurs. Now I can say that I can do many things in my life.” 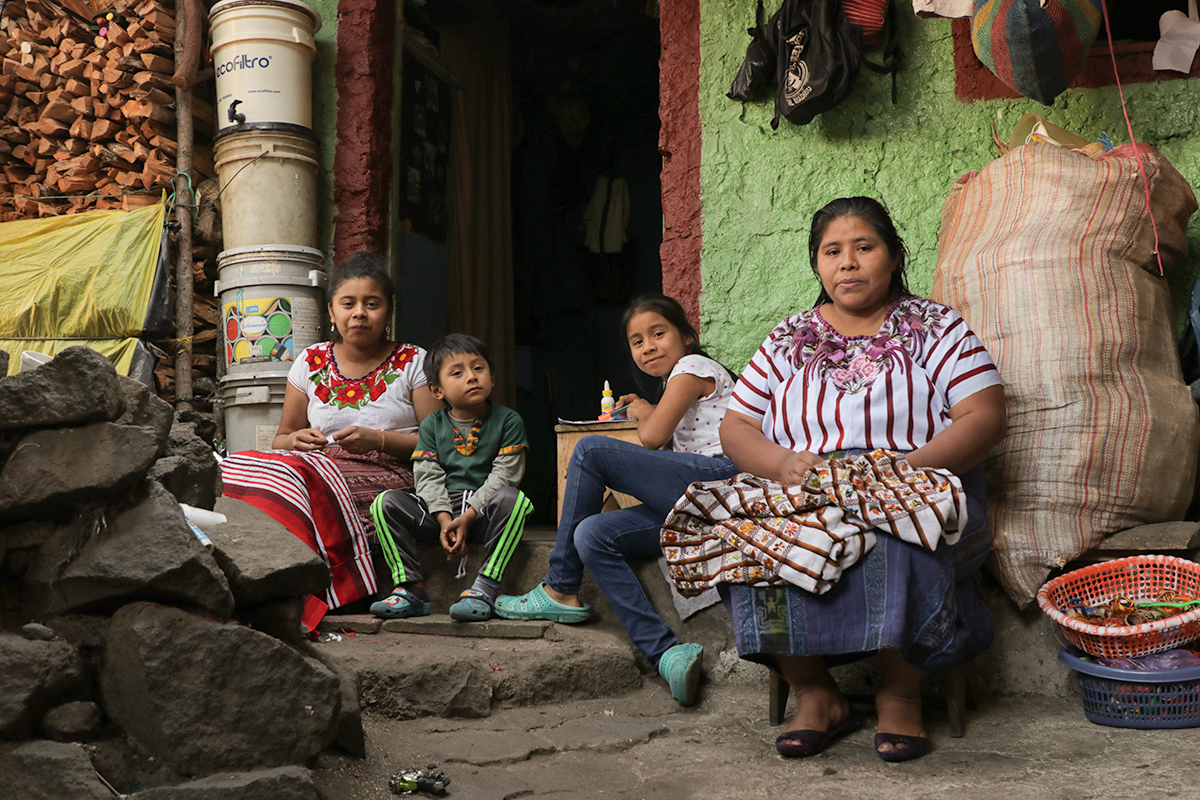 Despite never having led a group before, Juana led her mothers group in Guatemala to identify a need at the local school. The mother of six engaged with school leaders, helped write an Agents of Change proposal, managed the budget and assisted in executing the project. The leadership opportunity helped her overcome anxiety and have more confidence in her own life goals. Here, Juana is pictured with three of her children in front of their home. Pictured from left is sponsored child Rosa, 14; Juan, 3; Juanita, 11; and Juana, 42.

There were people who did not believe in our management, however, that would not prevent us from seeing the improvement take place. At the end of the whole process, we feel happy and proud to have managed this project.

— Juana, Mother of sponsored child and coordinator for her mothers group's Agents of Change initiative

See part one of this story, “Roots of Change,” to learn more about how the Agents of Change platform is helping communities as a whole.