The Roots of Change

In every individual lies the ability to create lasting change.

Unbound’s founders realized this inherent potential within individuals living in poverty early in the organization’s history and set out to empower families, connecting the world not only with their struggles but also with their incredible gifts.

In her story “Pathways for Potential,” written for Unbound’s “40 Lessons from 40 Years” series in 2021, Asia Regional Project Director Malou Navio called this concept “nurturing the aspirations of families.”

“Families … are the best agents of lasting change because their dreams and aspirations are centered around a better life and world,” Navio wrote.

As cliché as they may sound to those in the developed world, dreams and aspirations like these can be the best pathways for fulfilling great potential.

When these pathways intersect with opportunity, lasting change can find space to take root.


Unbound in 2017 introduced Agents of Change (AC), a platform that provides community groups with the opportunity to create and be a part of lasting change within their struggling communities.

AC awards grants, typically $500 but sometimes more, to small groups within Unbound’s sponsorship programs. The groups have ideas for solutions to poverty that take the form of community improvement projects. The AC platform taps into the leadership expertise and participation of a community by involving the local community members themselves, requiring them to draft their project proposals for access to funds and then, once approved, putting their own plans into action.

The short-term aim of the AC grant is to develop and improve community infrastructure and, in its short time in existence, AC has consistently done that.

Community improvement projects have been completed in all but three of Unbound’s programs across the world and have included improving such things as neighborhood safety initiatives, playgrounds and basketball courts, clean water access, bathrooms and classrooms in schools, lighting in health clinics and bridges that have shortened daily commutes. To date, Unbound has provided more than $1.3 million in funding for AC projects, and close to 1,000 projects have been completed.

The long-term goal of AC, however, is to provide participants with an opportunity that “elevates their level of agency,” or their “ability to envision alternate options and make meaningful decisions.” “Agency” is a key component of Unbound’s 9 Program Characteristics, in particular, “Worldview,” which seeks to help families become agents of positive change in their local communities and to see themselves as part of a worldwide movement, with responsibilities and opportunities to share their lives with their sponsors.

“Agents of Change is an excellent example of grassroots-led participatory development, and these grants are a tangible example of Unbound as a worldwide movement of love,” said Pritha Hariharan, Unbound international programs director. “Having the ability to solve their own problems empowers historically marginalized groups to believe in their own ability to create change.”

Hariharan’s comments aren’t just generalizations. In 2020, less than three short years after the launch of Agents of Change, Unbound conducted an evaluation that revealed the organization’s long-term goal had already taken root and begun to grow much sooner than anyone could have predicted. 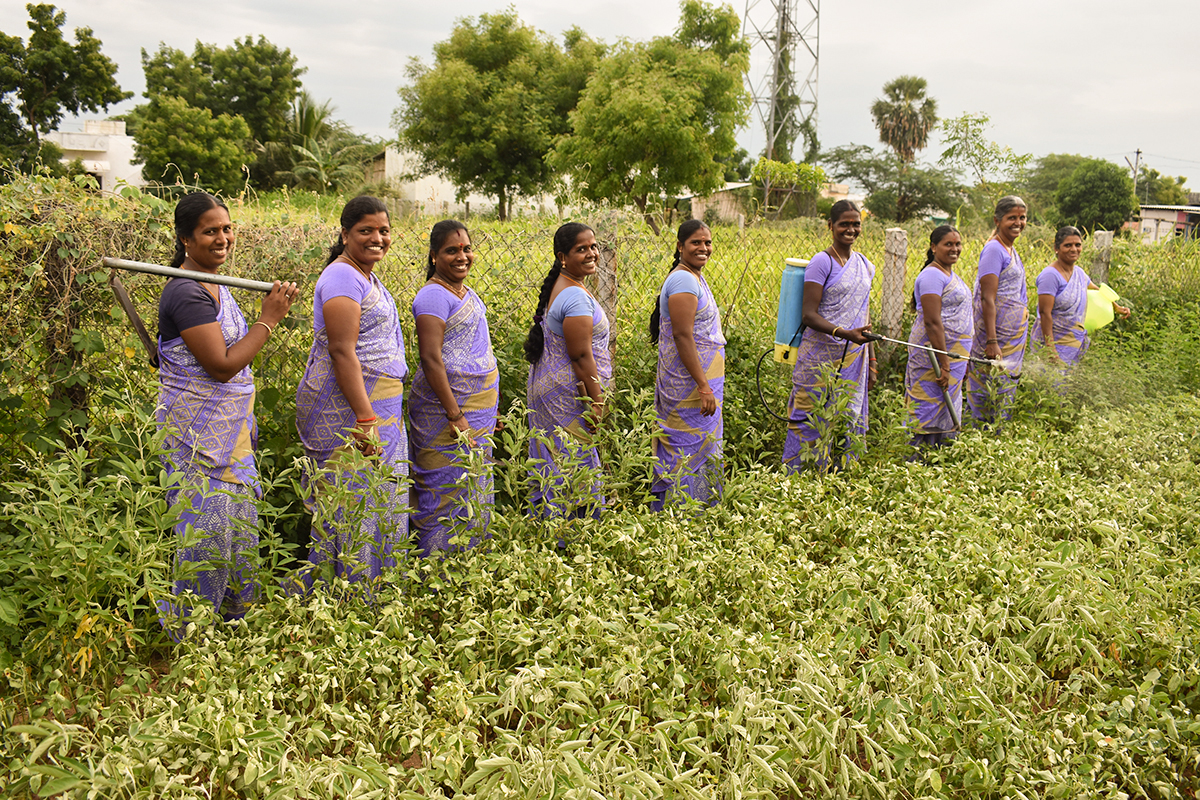 In Trichy, India, a mothers group used an AC grant to purchase farming equipment and tools that could be used among their sponsored families who live in an area where agriculture is one of the only occupations. The tools helped families in their fieldwork, to get the most out of their harvests and to spray for pests.

growing 'agency' within people in poverty


In 2020, Unbound conducted an evaluation of community groups in Honduras and the Philippines that either had or had not participated in the organization’s Agents of Change community-led improvement projects.

The purpose was to answer the question, “Is Agents of Change an effective way to produce sustainable or lasting change in the lives of participants?”

The results revealed that the Agents of Change platform has demonstrated “significant positive change” for participants, from making them feel more included in their own community, to helping increase their level of interaction with others outside of their regular social groups.

Nimisha Poudyal, Unbound evaluation manager, said that “agency” as Unbound defines it means that being an “agent of change” does not stop with the end of the community initiative or project. “What we were meaning is that … they continue to make meaningful decisions, taking action to improve their communities long after the initiative concludes, becoming lasting agents of ongoing change in their communities,” Poudyal said. 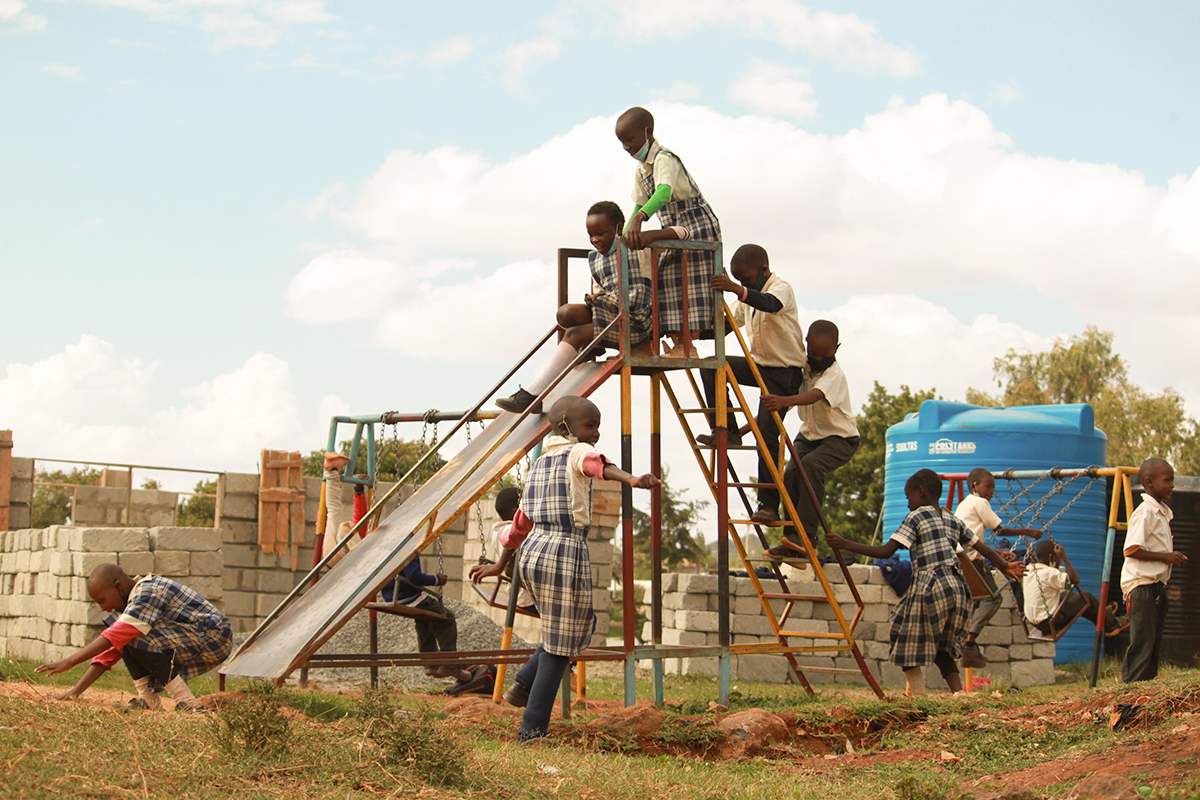 In Nairobi, a parent support group installed a playground for children at the PCEA Timau Primary School using an AC grant. The group applied for funds after they discovered the importance of play to a young learner’s development, and that most parents in the community couldn’t afford to pay park fees to take their children to a playground.

agents of change: the long-term goal of ac in action


Perhaps the most important aspect of Agents of Change is that it supports decisions by those in poverty closest to a problem, the community members themselves.

Individual potential as a driver of change
When AC launched in her community in Guatemala, cloth weaver María, a 52-year-old mother of six, including sponsored youth Maria, found herself elected president by peers on the “Change Agents Committee” of her Unbound parent support group. Her committee was responsible for inspiring members of the 39 parent support groups (mostly made up of mothers) in their community to get involved in AC, and for approving AC project proposals. It was a struggle to balance her time to lead the committee, but María found the effort has rewarded her with knowledge and experience she never thought she would have.

When María’s committee received AC proposals, they visited the communities to analyze and prioritize the potential projects and gauge whether a particular community had the capacity to support the execution of a project. People in the community were surprised to see a group of parents from disadvantaged families leading and approving the projects, a responsibility María said no one believed they could handle. Some of the first Agents of Change proposals María feels proud her committee authorized included improvements at local schools.

“The footprint that Unbound leaves [on] the community is indelible,” María said about the impact. “Teachers and others are passing through [the schools] and seeing the [AC] projects that have been executed, and they will continue to talk [about the change].”

María’s experience leading her community in the drive toward change has opened her eyes to other needs in the community as well and how to unite with people to achieve positive results.

“Unbound to me means to overcome together because Unbound itself does not walk alone,” she said. 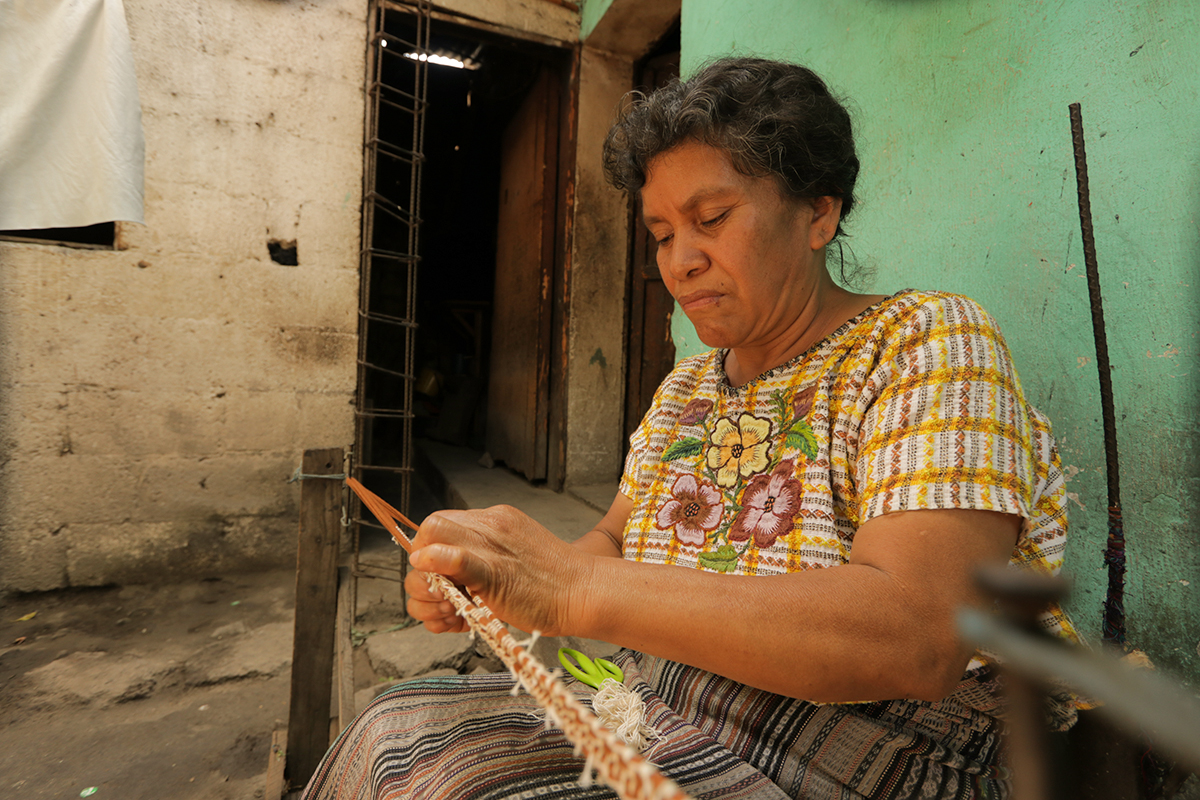 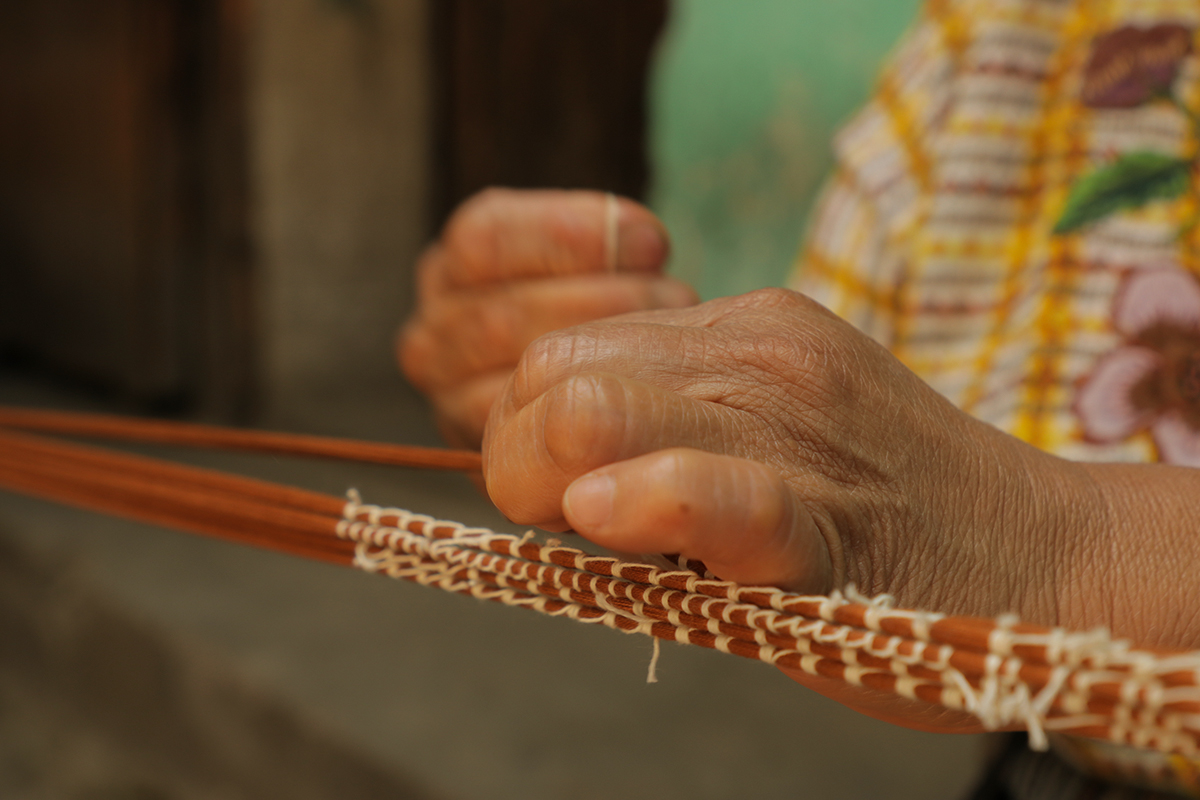 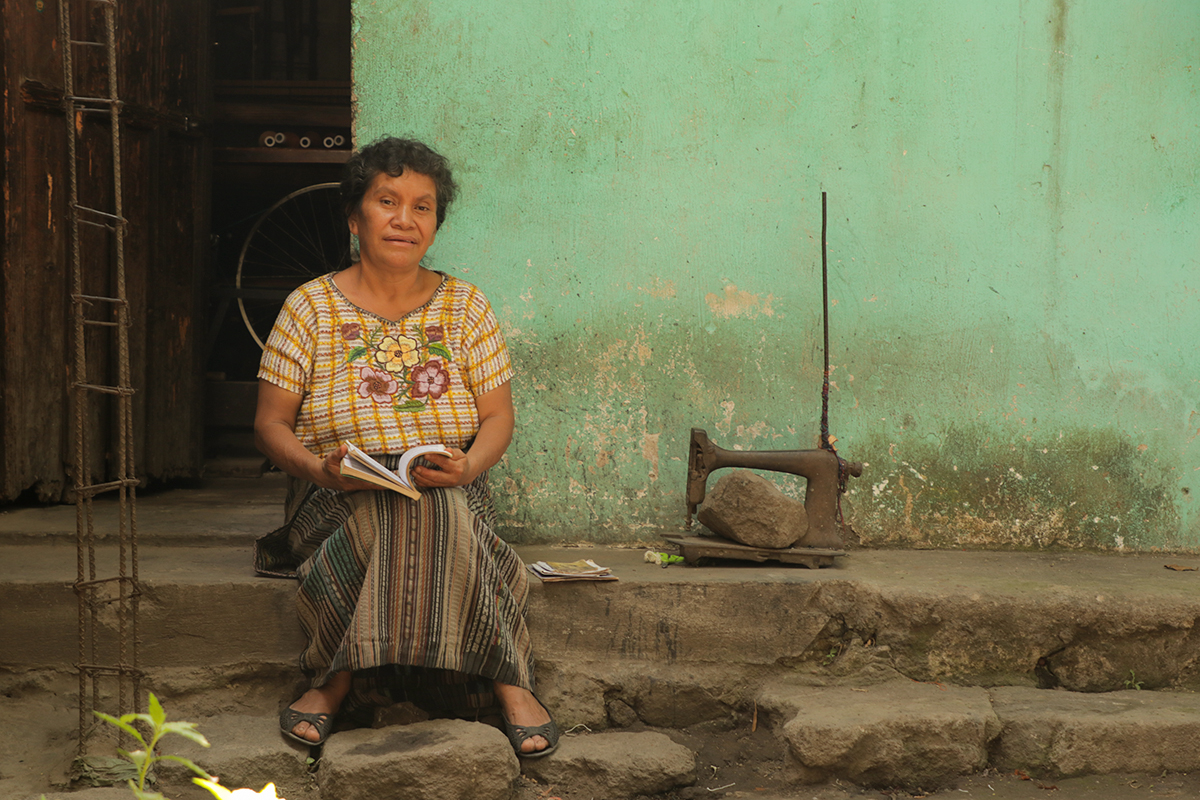 Photo 1: María, mother of a sponsored child in Guatemala, weaves on a stone step outside her home. María learned useful project and time management skills when she was elected president of her Unbound parent support group’s “Change Agents Committee.”

Photo 2: A closeup of María’s hands shows her pulling the thread to form figures on the fabric she is weaving. Her weaving supports her family of six.

Photo 3: On the steps of her home in Guatemala, María looks through a book. She once dreamed of being a teacher. Leadership of her parent group’s “Change Agents Committee” opened her eyes to the needs of her whole community. Her committee was responsible for approving AC funding for improvements at two local schools.

Community unity as a driver of change
In the Quezon program, the most common AC proposal requests are for funding to improve community roads and bridges, create functioning water systems, improve safety with streetlights and construction of communal toilets.

According to Program Coordinator Mavic Ihap, the effort of Unbound Quezon program’s parent support groups to drive change in their communities has slowly been recognized by town officials, homeowners associations and public schools, and the groups often receive assistance outside of Unbound AC funding to help complete their projects.

“They know they will [all] benefit from the project, so it brings unity, cooperation and strong support systems to sponsored and non-sponsored families,” Ihap said. “As agents of change, sponsored families have increased their self-confidence and feel empowered because they proved they CAN — they can do something for their community, they can contribute, and they can change.”

Parent groups in Quezon (and the community as a whole) were already accomplishing meaningful community projects together before the launch of Agents of Change. For example, a campaign called “One Pencil, One Paper” fundraised to buy school supplies for children of the community, while another campaign, the “Plant a Veggie Feeding Program,” taught community members gardening strategies. The launch of AC empowered the groups because it meant they could do more, including larger projects.

Some of those larger projects included the construction of communal toilets in slum areas where some families lived, giving them access to clean and working toilets, and the installation of streetlights in pedestrian-heavy areas so people could safely walk at night. 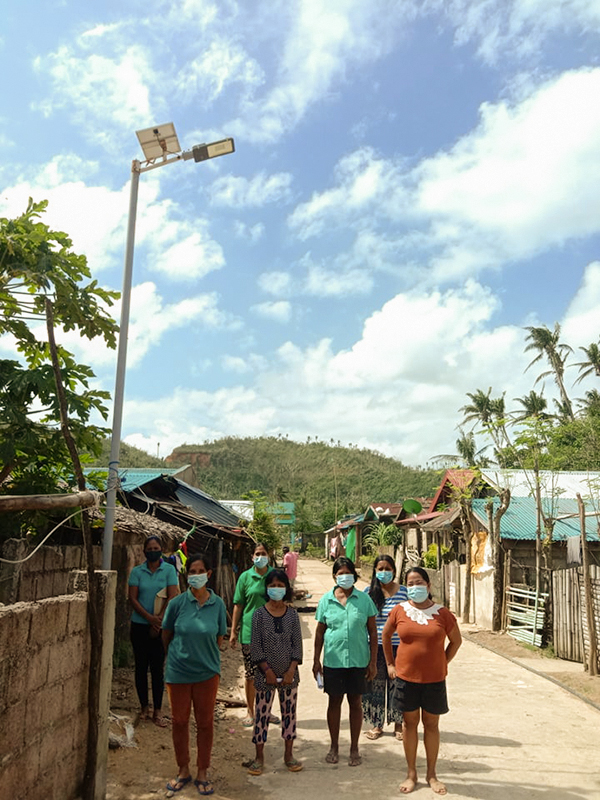 “Sioron,” a mothers group in Unbound's Legazpi, Philippines program, led an Agents of Change initiative in early 2021 to install solar-powered streetlights in an area of their community called Catanduanes. Catanduanes is a coastal area where typhoons and power outages are common. The solar lamps helped safely light the streets during these times. 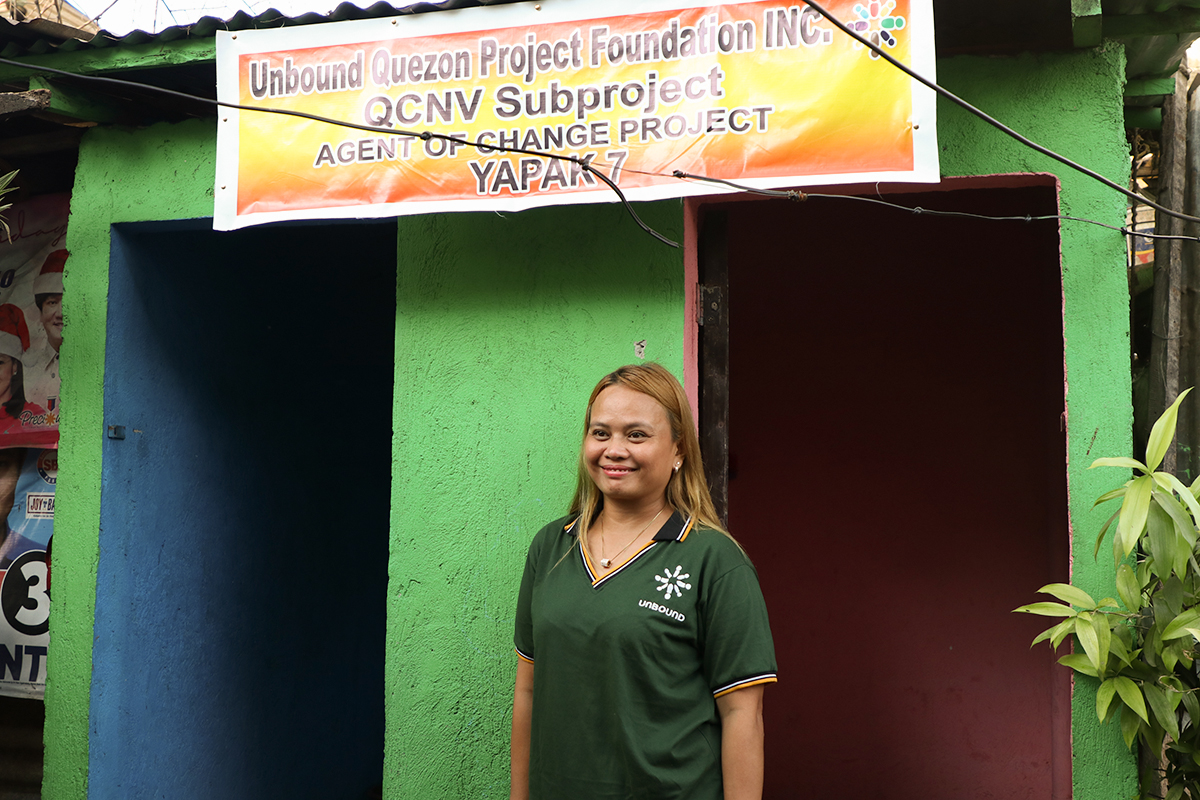 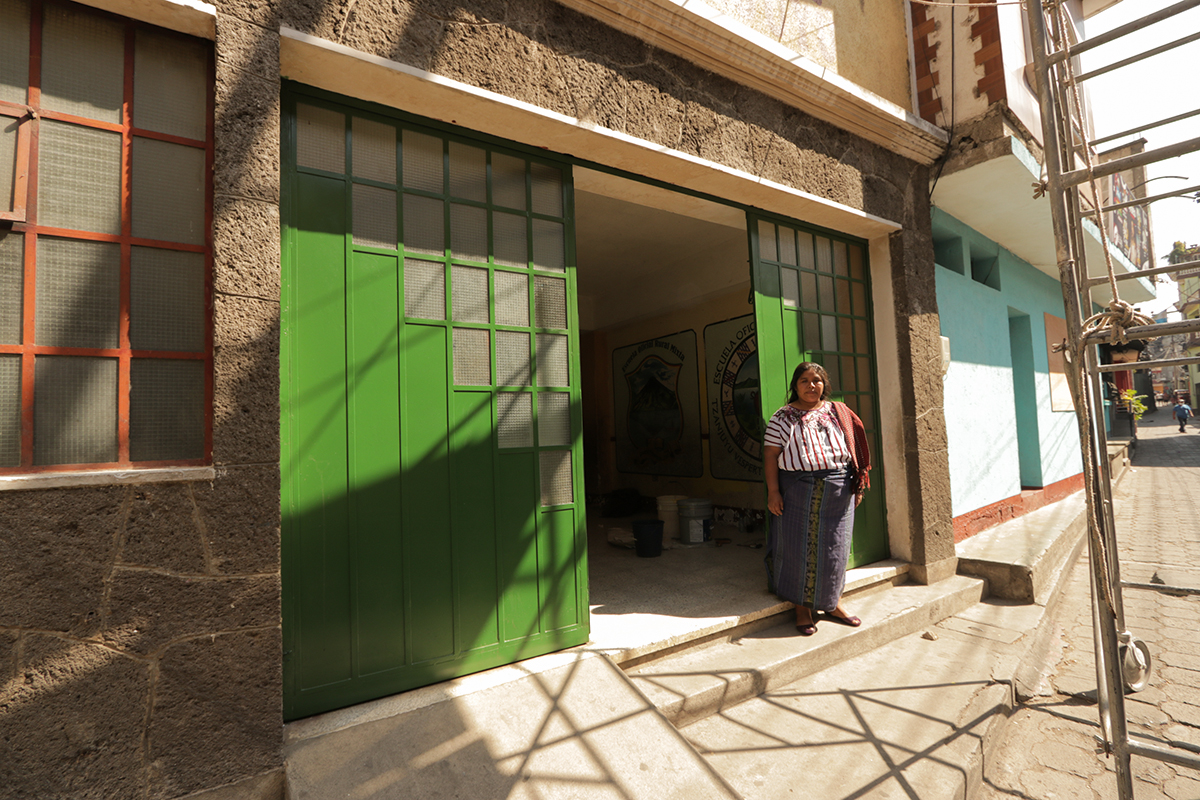 Photo 1: In Unbound’s Quezon program in the Philippines, parent support groups and non-sponsored members of the community initiated an Agents of Change project in 2018 to build “comfort rooms,” or toilets, in an urban area where as many as 100 families were doing without. Waste in the area had become a problem. The comfort rooms not only restored good hygiene to the area but were in keeping with the dignity of families. (Pictured in front of the comfort rooms is Pearl Joy, mother of sponsored child Rona and member of the parent support group.)

Photo 2: Juana, mother of sponsored child Rosa, led her parent support group to complete an Agents of Change initiative to install a sturdy gate at the entrance to their children’s school in Guatemala. “[This project] in my life has made me change the way I see difficulties,” Juana said.


When a tree begins to grow, its roots typically grow down into the earth, seeking nutrients. The roots then spread out horizontally in search of something more. A number of things can affect the rate at which the tree’s roots grow and the resiliency of the tree. The seeds from the tree create other trees, and so the cycle of silently seeking something more to grow continues.

Agents of Change is like a seedling that’s planted. But its roots call forth a questioning that begins to take hold in the mind of its participants as it grows down and out, seeking something more. And the questioning begins to challenge their belief that being born into poverty means they can never be or do something more. Hope fuels courage, and they begin to seek the necessary means to grow, impacting those around them.

Unbound’s evaluation team said during the conclusion to their study that the exciting part is what happens next, after the seeds of Agents of Change have taken root. Because when one has a vision and the opportunity to make meaningful choices, a catalytic change is created. And so, the lasting impact continues.

With Agents of Change, sponsored families increased their self-confidence and feel empowered because they CAN — they can do something for their community, they can contribute, and they can change.